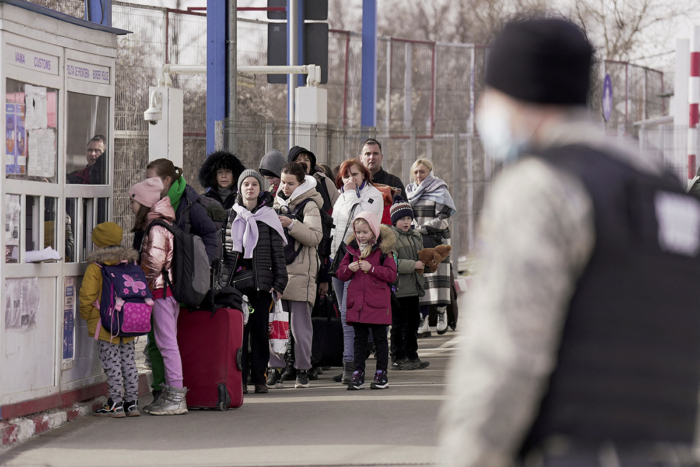 [Episcopal News Service] Episcopal churches in Europe and the United States are expressing solidarity with and praying for the people of Ukraine as Russian forces continue an invasion that has killed at least 136 civilians, has devastated Ukraine’s two largest cities and threatens to topple the country’s freely elected government.

“The Episcopal Church has been in Europe for more than two hundred years,” Bishop Mark Edington of the Convocation of Episcopal Churches in Europe, said in a video message released Feb. 25. “Our churches have seen Europe’s wars unfold. They’ve lived and endured in the midst of the destruction and depravity that war brings.”

Edington recounted examples of Episcopal parishes maintaining ministries during wartime, from the Franco-Prussian War in 1870 to the World Wars of the 20th century. An Episcopal church in Dresden, Germany, was destroyed by bombing during World War II, while the Cathedral of the Holy Trinity, commonly called the American Cathedral, in Paris was used as a military chapel by occupying German forces.

“For a long time – almost 80 years – we have believed that the futility of war was enough to deter it. Today, with war unleashed in Ukraine, we have been proven wrong,” Edington said referring to the Feb. 24 Russian invasion of the former Soviet republic. “Our faith teaches us that we must stand with the vulnerable and the oppressed. And at the same time, our faith teaches us that we are meant to be followers of the prince of peace, of the one who taught us that violence is always a compromise with evil. It is hard for us to reconcile those two teachings today, when innocent people are dying at the hands of a military onslaught.”

According to U.S. intelligence, Russian began positioning troops along the Ukrainian border back in December. Its invasion prompted the U.S. and its European allies to implement stiff new economic sanctions against Russia while unifying NATO opposition to Russian aggression. Though NATO does not count Ukraine as a member nation, Russian President Vladimir Putin has cited the prospect of the country someday joining the Western alliance as one of his top grievances.

Religious leaders and denominations around the world have condemned Russia’s march to war. On the eve of the invasion, The Episcopal Church’s Office of Government Relations and the Quakers’ Friends Committee on National Legislation organized a vigil for peace.

“We pray for a just peace. … We pray that the lives of innocents and the lives of any human child of God will be spared,” Presiding Bishop Michael Curry said during the online event.

The church also decided to sell off its Russian investments.

“The Episcopal Church Investment Committee met last week, opening with prayer for peace hours before the Russian invasion of Ukraine. In keeping with The Episcopal Church’s firm stand against this continued and escalating aggression, our investment managers sold the church’s Russian stocks, which constituted a negligible portion of overall investment assets,” Kurt Barnes, the church’s treasurer and chief financial officer, said in a written statement.

The Convocation of Episcopal Churches in Europe counts 21 congregations in six countries, including a mission in the former Soviet republic of Georgia. Most of the congregations are in Belgium, France, Germany and Italy.

“Our prayers feel insufficient to defend those cowering in fear and exposed to bullets and bombs. But we know that the place where war lives is in the human heart,” Edington said in his video message.

“As we begin our season of Lent, we are called to give up our easy complacency about the durability of peace. We are called to consider again the reminders in our midst of war’s relentless cost to human life and God’s hope. And we are called to pray, and speak, and to labor for the truth that Christ has called us to transform this broken world through the hard work of love.”

Bishops across The Episcopal Church have joined Edington in condemning Russia’s invasion while praying for the people of Ukraine.

“Please include in your intercessions and special prayers for the people of Ukraine, President Biden, all our elected officials and all Americans in the military,” Dallas Bishop George Sumner said in a message shared on Facebook. “Pray for our allies with whom we stand, for Russians willing to speak out, that the conflict not be widened, for an end to Russian aggression, and the restoration of peace.”

“People of faith, watching and feeling the political tectonic plates of our world shift and collide. How do we stand? Where is our sure footing? What are we called to do? Pray my friends,” Perry said. “Pray in a way you never have before. Pray with the passion and responsibility of the people who are being called to heal.”

Florida Bishop John Howard, in an email to his diocese, also called for Episcopalians to pray in response to “the unlawful, unprovoked and brutal invasion of Ukraine by Russia.”

“Join me in prayer that the Ukrainian war might conclude swiftly and with justice, that the innocent might be shielded from harm and that nationalistic aggression, abusive power and self-justifying violence might cease,” Howard said. “Pray, too, for the whole Christian Church in Ukraine and especially for the small Anglican congregation of Christ Church in Kyiv.”

The Russian attack is creating a humanitarian crisis, as more than a half million Ukrainians have fled their country as refugees. Episcopal Relief & Development is working with Anglican agencies and other partners to assist them.

“Ecumenical and orthodox faith networks are on the ground in the border areas of Poland and Hungary,” Abagail Nelson, Episcopal Relief & Development’s executive vice president, said in a news release. “We will continue to coordinate with these networks, in order to meet the needs of people who have been displaced.”

Donations can be made to the agency’s Ukraine Crisis Response Fund.