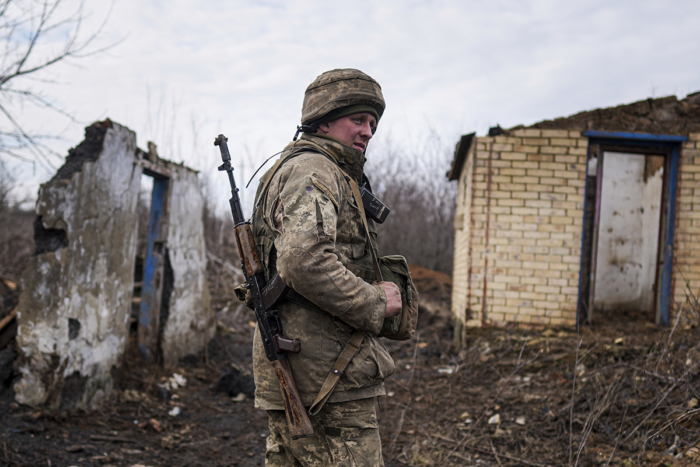 A Ukrainian serviceman stands at his position at the line of separation between Ukraine-held territory and rebel-held territory near Svitlodarsk, eastern Ukraine, on Feb. 23. Photo: Associated Press

[Episcopal News Service] More than a dozen interfaith leaders, including Presiding Bishop Michael Curry, offered prayers and calls for peace in Ukraine on Feb. 23 during an online vigil organized by The Episcopal Church’s Office of Government Relations and the Quakers’ Friends Committee on National Legislation.

Participants in the hourlong vigil included representatives from the Jewish, Muslim and Sikh faiths and several Catholic and Protestant Christian denominations, as nearly 1,000 people watched and listened live on Zoom and Facebook.

Curry, in his opening remarks, offered prayers for the “people and children of God whose lives and freedom are threatened.” Nearly 200,000 Russian and Russian-backed troops have deployed to the borders of Ukraine for what Western leaders have warned is an imminent invasion of the former Soviet republic, and some of those troops already have moved into an eastern region held by separatists.

Bridget Moix, the general secretary of the Friends Committee on National Legislation, acknowledged that the vision of peace shared by people of many faiths “seems very distant right now, with the threat of war in Ukraine escalating.” Those who work for peace must speak out all the louder in the face of that daunting reality, she said.

“We’re here with a commitment and a persistence, that peace is still possible,” she said. “We are here together for this time to share courage and hope with one another.”

The vigil was attended by more than 700 people on Zoom, according to the Office of Government Relations. Some of them submitted their own brief prayers for peace using the session’s chat tool. An additional 150 or so people watched the vigil livestreamed on Facebook, where it is now available on demand.

In August 1991, Ukraine followed the Baltic states and declared its independence from the Soviet Union, which a month later dissolved. In 2014 Russia annexed Ukraine’s Crimea Peninsula, an act Western powers condemned as a breach of international law.

Then, late last year, Russian President Vladimir Putin began positioning troops near its border with Ukraine. On Feb. 21, Putin declared in a speech that he would recognize two eastern Ukrainian provinces as independent states and send in Russian troops as “peacekeepers.” The escalation prompted the U.S. and Western European countries to implement new economic sanctions against Russia while rallying NATO unity in opposing further Russian aggression. Though NATO does not count Ukraine as a member nation, Putin has cited the prospect of the country someday joining the Western alliance as one of his top grievances.

Religious leaders and denominations around the world have condemned Russia’s apparent march to war, with Pope Francis calling for a world day of peace on Jan. 26. The Episcopal Church joined that call when its Executive Council passed a resolution that expressed “grave concerns about the escalation of tensions and military buildup along the border of Russia and Ukraine.”

Presiding Bishop Elizabeth Eaton of the Evangelical Lutheran Church in America said during the Feb. 23 vigil that all people of faith share the work of advocating for peace.

“May our security come not from weapons but from respect. May our strength come not from violence but from love,” Eaton said. “May our victory not be one of revenge but of forgiveness.”

The Rev. Charles Robertson, canon to the Episcopal presiding bishop for ministry beyond the church, closed the vigil by urging participants and attendees to continue the work of peace.

“In this vigil of faith and prayer, we have gathered together on behalf of those who even now face the specter of war and suffering and injustice,” Robertson said. “Let us not conclude this vigil but continue it, each of us, through our persistent prayers for peace and through our persevering commitment to justice. … Let us be instruments of peace, of justice and ultimately of hope.”