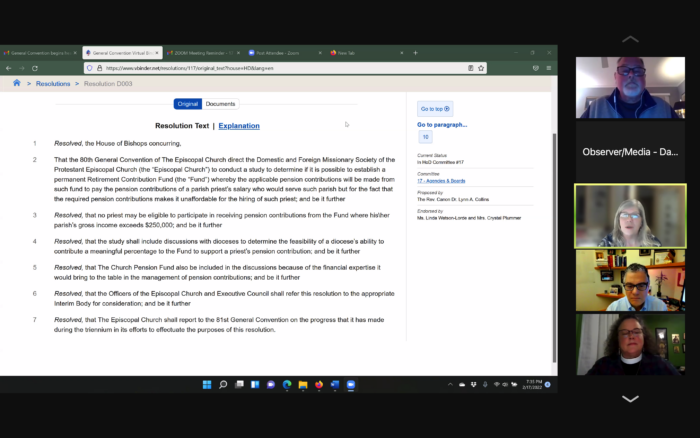 [Episcopal News Service] Bishops and deputies are considering a General Convention resolution that calls on the church to study the feasibility of creating a fund to support under-resourced congregations in paying their clergy pension assessments. A hearing on the resolution was held Feb. 17 by the Agencies & Boards Committee, not in a conference room but in a Zoom room – open to anyone with an internet connection who had registered in advance.

The hearing drew 28 attendees, a mix of committee members, observers and two deputies who had signed up to testify about Resolution D003, which was drafted and proposed by members of the House of Deputies’ Black caucus.

Most congregations’ largest expenses are building maintenance and clergy compensation, Annette Buchanan told the committee in her testimony in support of the resolution. Many Black congregations, in particular, “are close to closing, and others are without vital ministry” because of these financial burdens, though Buchanan, an alternate deputy from New Jersey and past president of the Union of Black Episcopalians, noted that other Episcopal congregations could benefit from the proposed fund as well.

“We are hopeful that this body will appreciate the desperate need that many congregations across the church have,” Buchanan said.

The hourlong session was one of three committee hearings held Feb. 17, marking the first time that General Convention has convened legislative hearings online. The other two committees that met that evening were Racial Justice & Reconciliation and Christian Formation & Discipleship.

The COVID-19 pandemic forced The Episcopal Church to postpone its triennial in-person gathering from 2021 to 2022, a disruption to the normal schedule of church governance that created some unexpected opportunities. Commissions, task forces and other interim bodies kept to their timetables for filing their reports, which were posted online in April 2021, so legislative committees will have had more than a year to review the reports before gathering this July 7-14 in Baltimore, Maryland.

Committees began meeting in November to organize themselves and to begin considering any resolutions already submitted. Episcopalians and other interested members of the public can sign up to observe those online meetings and to testify at online hearings through a process set up by the General Convention Office. The online hearings run through May 21, and additional in-person hearings will be held in Baltimore.

Episcopalians and other interested members of the public can sign up to observe online General Convention committee meetings, and registration is now open to testify at online hearings, which begin Feb. 17. https://t.co/hrzVbPmKym

For now, D003 is the only resolution before the Agencies & Boards Committee, which is chaired by Jane Cisluycis, a deputy from Northern Michigan, and Long Island Bishop Lawrence Provenzano.

Episcopal Church Canons require congregations to pay pension assessments to the Clergy Pension Fund at a rate of 18% of a clergy member’s total assessable compensation, including housing. The fund proposed by Resolution D003 would offset some of those costs, with eligibility possibly extended to congregations with annual revenues of $250,000 or less.

Agencies & Boards committee members were generally receptive to the resolution while offering suggestions for revisions. The precise revenue threshold, for example, could vary depending on the conclusions of the proposed study. There was discussion about how to finance such a fund, such as with contributions from dioceses and church foundations and possibly a fundraising campaign by the church’s Office of Development.

Some committee members also suggested that pension assistance need not wait until approval by the next General Convention in 2024. If the study produces a plan sooner, a fund could be approved and created by Executive Council.

Retired Milwaukee Bishop Steven Miller, committee secretary, drew on his experience in Milwaukee and posed the idea of creating a pilot program to test the feasibility of such a fund. The Diocese of Milwaukee covers the geographic lower third of Wisconsin and includes congregations in major cities as well as sparsely populated rural areas.

“There’s a whole lot of people that can’t afford clergy,” Miller said. “Pension is a part of that, but not all of that.”

Harold Patrick, a deputy from Southern Ohio, said he thought such a fund would go a long way toward addressing a pressing churchwide issue.

“This is a critical piece of what we need to do, to the extent that we want to have competent qualified clergy in parishes where they want to be,” he said. “We’ve got to find a way.”

The committee decided to form a subcommittee to draft revisions to Resolution D003. Its next meeting is scheduled for March 10 on Zoom.