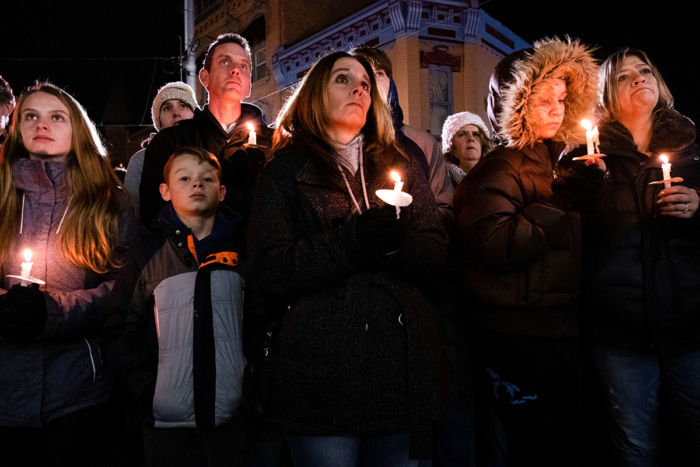 Thousands from the community of Oxford, Michigan, gathered Dec. 3 for a vigil to remember the students killed in a shooting at Oxford High School. Photo: Reuters

[Episcopal News Service] The Diocese of Michigan has joined a coalition of faith-based and secular organizations in launching an initiative called End Gun Violence Michigan that will press for gun safety legislation in the state and, if necessary, put forward ballot initiatives to address gun violence.

“From big cities like Detroit to small towns like Oxford, gun violence is tearing our communities apart,” Michigan Bishop Bonnie Perry said this week in a news release about the Feb. 14 launch of the initiative. “We can’t stand by anymore while more people, including our children, are killed.”

Other organizations involved with End Gun Violence Michigan include the Michigan chapter of March for Our Lives, Michigan United, the Charles W. Reid Community Center, Oakland Forward, Church of the Messiah, Interfaith Action of Southwest Michigan and the Council of Baptist Pastors of Detroit.

A person is killed with a gun every eight hours, and every two hours a person is injured in a non-fatal incident involving a gun in the state, according to a study of the impact of gun violence in the Michigan by the Center for American Progress.

End Gun Violence Michigan’s initial steps will include pressing the state Legislature to adopt what advocates suggest are popular, common-sense gun-safety measures, such as universal background checks, safe gun storage requirements and prohibitions on guns in the Capitol and other government buildings.

“As a person of faith, and all of you people of good will, we and I can no longer stand by and watch our legislators do nothing,” Perry said during the Zoom news conference. “We can make common-sense changes that respect the rights of gun owners and keep our children alive, safe. We can end gun violence in Michigan.”

The new push for gun law reform comes as residents in Southeast Michigan grieve after recent deadly shootings, including the Nov. 30 killing of four students at Oxford High School north of Detroit in Oakland County. A 15-year-old student, Ethan Crumbley, was arrested and charged in that attack.

Kiley Myrand, a junior at Oxford High School, joined the news conference on Zoom to share her experience of surviving the shooting.

Myrand said she and her classmates huddled in their classroom for about an hour until law enforcement agencies secured the building. They were told to grab textbooks to use as defensive weapons if necessary. “I was trembling holding a textbook just knowing that this is what we had been trained for since whenever I could remember,” Myrand said.

A close friend of hers, Tate Myre, was killed in the attack. “Tate had a very bright future,” she said. “His precious life and others’ were taken decades too soon, and it breaks my heart to think about.”

The launch of End Gun Violence Michigan coincided with the fourth anniversary of the school shooting in Parkland, Florida, where 17 people were killed. Over 292,000 students have experience gun violence at school since the 1999 massacre in Columbine, Colorado, according to data tracked by the Washington Post.

The Episcopal Church has long advocated for gun-safety measures in response to the increase in gun-related violence in the United States. General Convention has passed resolutions aimed at reducing gun violence dating at least to 1976, and churchwide efforts in recent years have been led by the Bishops United Against Gun Violence network, of which Perry is a convener.

End Gun Violence Michigan is promoting several advocacy events in the coming months, including a “Lobby for Our Lives” day on Feb. 23 at the Capitol in Lansing organized by March for Our Lives Michigan. Another lobby day is set for April 13, and a statewide day of action is planned for June 6.

If such lobbying efforts fail to compel lawmakers to pass gun safety legislation, End Gun Violence Michigan says it will investigate the feasibility of getting voter initiative on the ballot for state elections in 2024.

More information about End Gun Violence Michigan can be found at migunsafety.org.