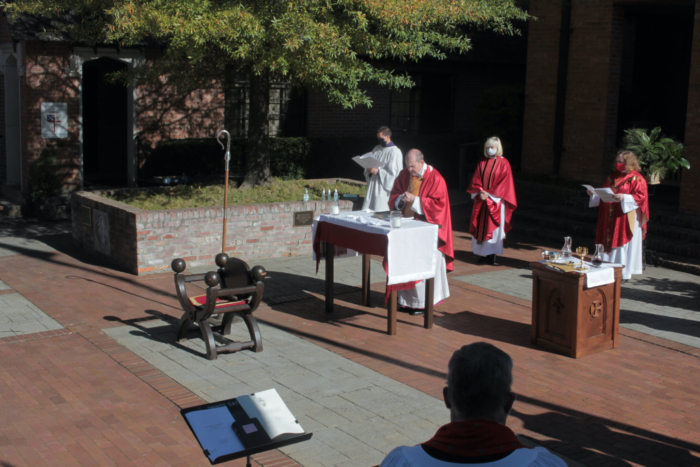 Arkansas Bishop Larry Benfield presides as a priest ordination held outside because of the pandemic in December 2020 at Trinity Episcopal Cathedral in Little Rock. Photo: Diocese of Arkansas, via Facebook

[Episcopal News Service] Two years into the COVID-19 pandemic’s disruptions to parish life, dioceses have provided details on how they are putting to use more than $3 million in one-time churchwide relief grants. The wide range of examples point to the diverse ways in which congregations are adjusting, innovating and surviving in these unprecedented times.

Starting last year, each diocese was able to request a $40,000 grant to use however it saw fit, no strings attached, and 76 dioceses had received grants as of Executive Council’s last meeting, in late January. A spreadsheet summarizing the grant requests was provided to Episcopal News Service by the church’s finance office.

“There have been some very creative uses of the funding,” the Rev. Mally Lloyd, chair of Executive Council’s Finance Committee, told ENS by phone. The dioceses are “taking seriously the opportunity to discern where it should go.”

The Diocese of East Tennessee is using its grant to support anti-racism efforts and cover the cost of “significant deferred maintenance.” The Diocese of El Camino Real, based in Salinas, California, said it is giving the money to congregations that have proven themselves “nimble, creative and dedicated” in coordinating ministries serving farmworkers and people who are homeless. And Eastern Oregon said it “will be sharing these funds with local Indigenous groups in support of emerging grassroots, Indigenous-led efforts to revitalize cultural practices.”

Other dioceses told the church that the money was greatly needed to offset diocesan and congregational budget shortfalls caused by the COVID-19 pandemic. Central Gulf Coast noted that its church pledges dropped by 8% in 2021, prompting the diocese to cut its budget by 5%, freeze staffing costs and increase its reliance on its endowment.

The Diocese of West Texas described its response to similar financial constraints, including leaving positions vacant and implementing ministry budget reductions. It also waived some of the regular payments it collects from its 87 congregations.

“At the same time, we have become very involved in immigration along our 500-mile border with Mexico and now have a full-time staff person overseeing that ministry,” the diocese said in its grant request. “Thank you for the generosity reflected in this grant.”

Executive Council approved the money in April 2021 after a yearlong deliberation about how the church, which remains on solid financial ground, could best help dioceses and congregations to weather the disruptions caused by the COVID-19 pandemic. Though it didn’t tell dioceses how to spend the money, it encouraged them to engage in a discernment process over whether they felt called to act on one of the following three prompts:

“We wanted to make it really easy on the dioceses, so reporting back was optional,” Lloyd said, though Executive Council’s Finance Committee expects to review examples of some of the dioceses’ initiatives more closely at its April meeting.

About 70% of the church’s 109 dioceses and its three mission areas have requested the money. The rest have until Nov. 30 to do so.

In Arkansas, the diocese is using part of its grant “to support a small number of our congregations that have decreased revenue due to COVID and [are] on the brink of being unable to afford clergy. Their anxiety is high.”

Congregations in the Diocese of Arkansas also have expanded their food pantry ministries in response to the pandemic. “Even after COVID, these ministries will continue and are making a huge difference in the lives of people who are living on the margins in towns across the diocese,” the diocese said.

The Diocese of Dallas said it will use its grant to help pay the salary for a vicar to serve the Associated Parishes of East Texas, which is made up of “small rural congregations that are in struggling towns across this under-resourced part of our state.” The diocese has committed to covering the cost of the vicar’s salary in subsequent years.

Indianapolis is using the $40,000 to help launch “a new program of diocesan grants to support congregational innovation toward sustainability, discipleship, community engagement and growth.” Maryland said it used half of its grant to make up for lost revenue at its Claggett Center during the pandemic and the other half to support a summer program for Baltimore teens.

North Dakota said it is dividing the $40,000 equally among its 20 congregations, and each is asked to spend the $2,000 to “provide relief in their local communities.” Southwestern Virginia will help its congregation expand their use of online resources to support outreach and ministries. Maine identified several initiatives that will benefit from its grant, including a racial reconciliation archival project that will “explore the source of our historic benefactors’ wealth.”

And in the Diocese of Washington, the grant will help develop a racial reparations program. The diocese said it “is undertaking a reparations research initiative. Our purpose is to investigate the financial legacy of chattel slavery in the diocese. Our goal is to reckon with and make restitution for the value of reparations owed on that legacy.”