[Episcopal News Service] At a memorial service for Archbishop Desmond Tutu at the Cathedral Church of St. John the Divine in New York City on Feb. 13, Presiding Bishop Michael Curry remembered the former primate of the Anglican Church of Southern Africa as a relentless optimist who saw the promise of Easter even when it looked like Good Friday.

In addition to a sermon from Curry, the memorial service for Tutu, who died on Dec. 26, 2021, at age 90, featured eulogies from international dignitaries and prayers and hymns in multiple ethnic and religious traditions.

Tutu was remembered for his steadfast commitment to a just, nonviolent end to the apartheid regime in South Africa – an effort that won him the Nobel Peace Prize in 1984. The success of that movement culminated in the 1994 election of Nelson Mandela, who named Tutu the chairman of the national Truth and Reconciliation Commission. Tutu’s leadership lent credibility to the commission’s work of exposing the atrocities of apartheid and pursuing restorative justice.

“The voice of that little man. Remember how little he was? Before I met him the first time, back in the ‘80s, I just knew he was as big as LeBron James. And he was bigger than that!”

Curry recalled going to hear Tutu speak during “the dark days” in South Africa, when Mandela and other Black political leaders were still in prison.

Curry also drew parallels between Tutu’s fight for justice in South Africa in the 1980s and 1990s and the challenges facing the world today. The guiding principle in these efforts, Curry said, must be the golden rule of loving God with all one’s heart and loving one’s neighbor as oneself.

“Do that and you will figure out how to make poverty history so that folks aren’t suffering in this world anymore. Do that and we will make sure that vaccines are available around the world and not just for us, who are privileged in this part of the world,” Curry said, drawing applause from the in-person audience, limited due to COVID-19. 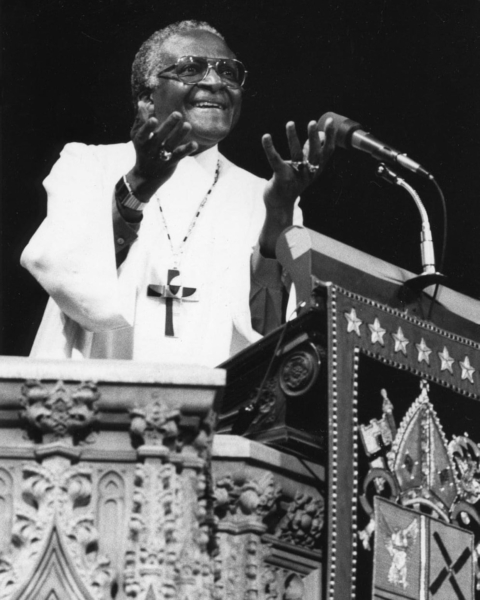 “Do that even as the sabers are rattling around the world, even as we gather here tonight. Do that and we’ll learn how to lay down our swords and shields down by the riverside and study war no more.”

In his eulogy, Rangel remembered “that smile, that wit, that eloquence that Bishop Tutu had” and credited Tutu as an inspiration for his own political career, which included representing New York in the House of Representatives from 1971 to 2017. Rangel said he admired Tutu’s boldness in applying Christian values to political problems, a trait Rangel said should be reclaimed by Christians.

“His life has shattered the myth of the separation that we should have between our churches and our spiritual institutions and our policies,” Rangel said. “If [our] spiritual leaders are separate and neutral in the things that we do, then all of the things that Jesus said that we should do in making certain that we treat the lesser of our brothers and sisters – it just doesn’t make sense.”

The music included a traditional Namibian song, an African American spiritual and the South African hymn “Siyahamba,” with lyrics sung in English, Zulu and Spanish, and the service closed with an organ and saxophone rendition of “Nkosi Sikelel’ iAfrika (God Bless Africa),” the South African national anthem.