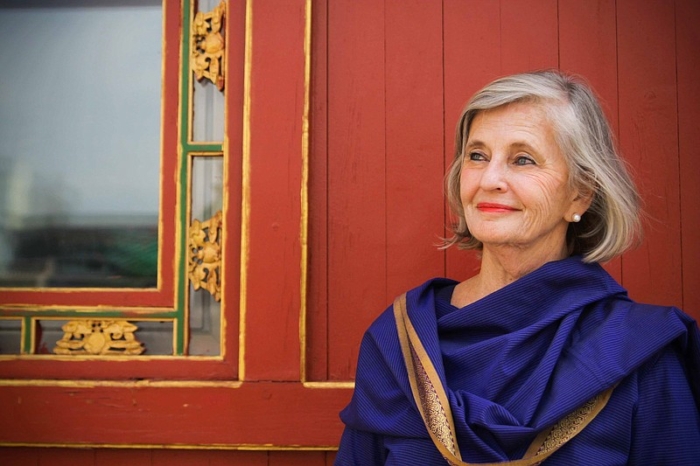 The Rev. Susan Sims Smith during a trip to Mongolia in 2017. Photo: Amy Carper

[Episcopal News Service] It might seem far-fetched for an Episcopal priest from Little Rock, Arkansas, to be working on an interfaith prayer house in Mongolia, a mostly Buddhist country between Russia and China. But for the Rev. Susan Sims Smith, it’s just the latest stage of her longtime dedication to fostering interfaith connections.

The project – which is still in its initial stages and has been delayed by COVID-19 – is a collaboration with one of the exiled Tibetan government’s top Buddhist advisors. It draws on Sims Smith’s experience creating the Arkansas House of Prayer – “an interfaith haven for silent prayer and meditation” in the woods on the outskirts of Little Rock.

Sims Smith’s wide-ranging spiritual journey has taken her to India – where she has learned from a spiritual teacher – 18 times, she said. She was ordained an Episcopal priest in 1999 and has served on staff at Little Rock’s Trinity Episcopal Cathedral in addition to her work in spiritual direction and couples counseling. She is a co-founder of the Interfaith Center, which hosts interfaith programs and does charitable work – such as resettling Afghan refugees – in Arkansas.

“I’m deeply committed to Christ,” she said. “And I also have a lot of blessings from Hindu and Buddhist spiritual traditions that are enriching [my] Christian practice.”

While teaching meditation in Arkansas, she saw a photo of the Episcopal House of Prayer, an Episcopal Church in Minnesota chapel and retreat center open to all on the grounds of the Roman Catholic Saint John’s Abbey and University in central Minnesota. According to the university, it is the “first time since the Reformation of the Sixteenth Century an Anglican diocese and a Benedictine monastery in communion with Rome have pledged to live, work and pray together in this unique way.”

“Teaching meditation is not easy,” she told ENS. “I said to my husband, ‘If somebody could sit in a room like this, the architecture itself would really help them move into silence.”

That was Sims Smith’s inspiration for building the Arkansas House of Prayer, a joint ministry of the Diocese of Arkansas and St. Margaret’s Episcopal Church. She led a fundraising drive to build the chapel, which opened in 2007. The centerpiece of its design, which has won several architectural awards, is the round, wood-paneled prayer room that opens up toward the sky. 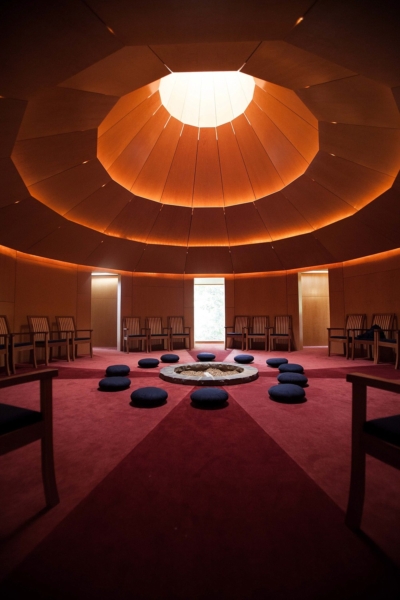 “I knew he was a person of deep meditation and I showed him pictures of the [Arkansas] House of Prayer just because I thought he would enjoy it,” Sims Smith recalled. “And he said to his assistant, ‘Go get the drawings.’ And the assistant comes in and brings the most gorgeous Tibetan drawings of a round meditation center that he believes the Spirit is telling him to build in Mongolia. I just cannot even describe the beauty and the intricacy and the detail of the drawings he had made.’

“I said, ‘If there’s anything I can do to help you when you get ready to work on that, I would be happy to do it.’ And after I said it, I was thinking, ‘I cannot believe I said that. How could I possibly help this man?’”

Sims Smith forgot about the encounter until several years later, when she was recovering from an injury and spending long periods of time in deep meditation. “And in all that quiet, I heard, ‘You’re supposed to try to help Kuten-la,’” she said. “I thought that was kind of preposterous, but I found a way to get a message to him, telling him that I felt like Spirit was calling me to help him.” 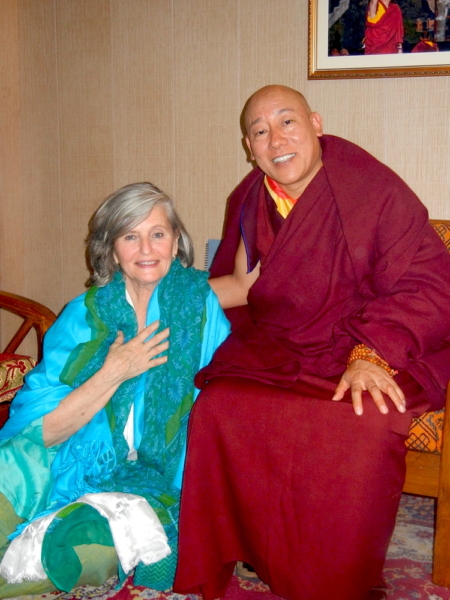 She invited him to Arkansas, “not really imagining he would do it.” To her surprise, in 2016, he came with eight other monks and stayed for three days, visiting the House of Prayer and talking with Sims Smith about the calling they both felt. That’s when he invited her to spend two weeks in Mongolia with him, outlining their vision to Buddhist leaders there.

Mongolia’s constitution provides for freedom of religion, prohibits religious discrimination and mandates the separation of church and state. Religious institutions are required by law to register with authorities, but how that law is implemented can vary by local jurisdiction.

The Soviet-influenced Communist regime that ruled Mongolia since the 1930s until 1990 repressed religion and religious expression, killing at least 17,000 Buddhist monks and destroying most Buddhist temples in the country.

“A lot of the people that I met when I was in Mongolia had relatives that were murdered for religious persecution reasons,” she said. “They only got their freedom to be a democracy, to have capitalism and to have religious freedom in the early ‘90s.”

Since the fall of Communism, public religious practices have rebounded, but “there’s no connectedness among the religions, she said. “Everybody is just so thrilled that they can worship their own way and believe their own way.” Sims Smith also suggested that fostering interfaith solidarity in Mongolia might help protect religious freedom as a whole in the country. 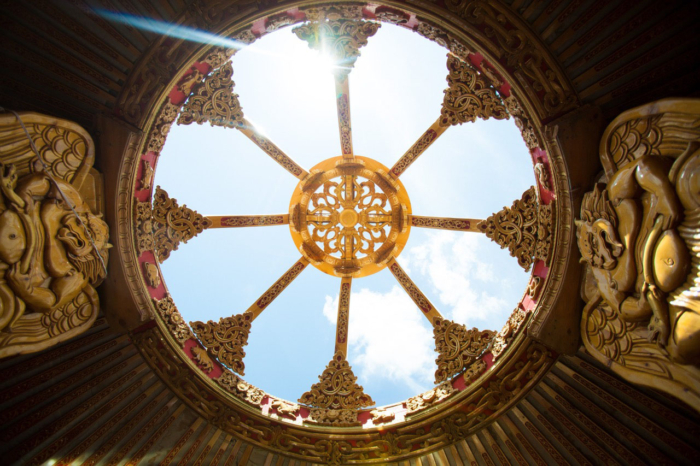 The view through the top of an ornate temple outside Ulaanbaatar, Mongolia. Photo: Amy Carper

Of Mongolia’s 3.3 million citizens, 51.7% are Buddhist, 3.2% are Muslim, 2.5% practice Shamanism and 1.3% are Christian, with 40.6% not reporting a religious affiliation. Though the Christian presence in the country is small, it has grown rapidly, from virtually no adherents in 1990 to over 40,000 in 2020. There is no permanent Anglican presence in the country, but it is part of the Church of England’s Diocese in Europe, and a Moscow-based chaplain has performed pastoral services in the capital, Ulaanbaatar, according to Richard Mammana, associate for ecumenical and interreligious relations for The Episcopal Church.

“When you stabilize the local people and allow them to worship in their own way and teach them to be friends with each other, you stabilize the whole democracy,” she told the Northwest Arkansas Democrat Gazette.

Sims Smith said that when she and Kuten-la visited Mongolia in 2017 to look at land, “the local Buddhist Mongolian leaders [were] very excited about this project” and eager to learn about interfaith work, she told ENS.

In March 2020, Sims Smith and Kuten-la were in India planning a monthlong fundraising tour around the United States when the pandemic hit. She cut her trip short and returned to Arkansas, and the fundraising tour was postponed indefinitely. But even without a formal fundraising drive in place, Sims Smith said, she has already received $140,000 in donations. She estimates that the total cost will be around $1 million. The site selection process is still underway and the initial architectural drawings are complete, though they are currently in India with Kuten-la.

Sims Smith said the fundraising tour will begin “as soon as we’re able to travel safely,” but she can’t predict when the building might be finished. Despite the many challenges facing the project, she is undeterred.

“There’s no doubt in my mind that the money will be raised and we’ll be in Mongolia before you know it, opening a new meditation center,” she said. “It is our prayer and hope that the Dalai Lama will go to Mongolia to bless it.”