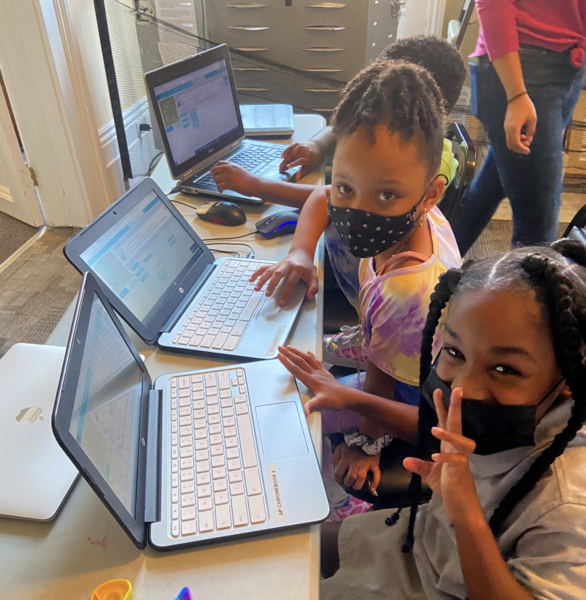 Faith and Madison learn computer coding from NOLA CODE, a local non-profit that teaches the principles behind computer science and engineering to students in New Orleans. Courtesy of St. Anna’s Episcopal Church

[Episcopal News Service] St. Anna’s Episcopal Church in New Orleans is surrounded by a city that for years has had a high murder rate. In 2021, according to a report by WDSU-TV, 218 people were murdered, the most since Hurricane Katrina in 2005. And in January 2022, 22 people were murdered.

Since 2007 the church has borne witness to those lost to violence, listing their names on signs outside the church on what is known locally as the “murder board.” But St. Anna’s rector, the Very Rev. William H. Terry, said the parish wanted to stem the violence and in 2010 started what would become Anna’s Place.

“We equip kids who are at-risk, underserved, mostly kids of color, who are at or below the poverty level,” Terry told Episcopal News Service. The aim, he said, is to disrupt the community’s culture of violence through serving its children. 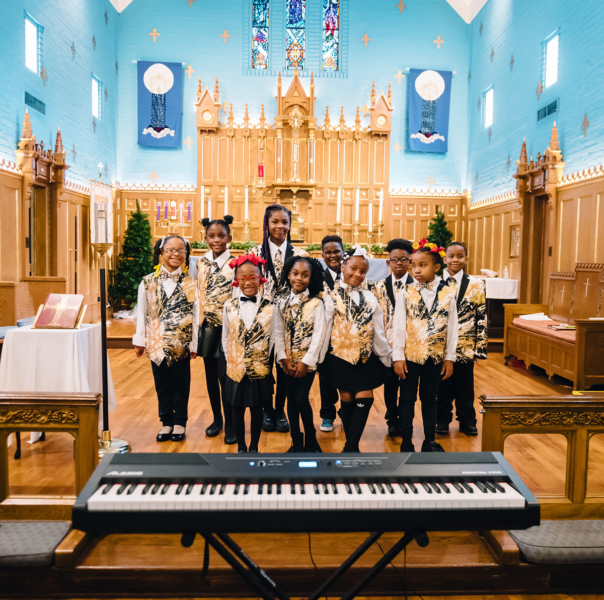 The Anna’s Place NOLA Children’s Choir for children ages 5-12 stands in the church’s nave. The ensemble was formed in 2021 by choral director Ken Leach and performs for churches and at other public events. Photo: Courtesy of St. Anna’s Episcopal Church

Anna’s Place NOLA is the parish’s arts and education enrichment mission program serving children and youth in the Tremé and the Seventh Ward, where high rates of poverty and unemployment, low education levels, poor access to healthcare and homelessness converge in a culture of violence in a city where 23% of the population lives in poverty.

Anna’s Place grew out of an after-school arts program started 12 years ago by Darryl Durham, a classical clarinetist, who continues to run it. Today it serves 30 children and adolescents ages 5 to 17 who come to St. Anna’s Place three days a week for three hours each day and for five hours on Saturdays.

The program provides academic tutoring and mentoring, with an emphasis on math and science; arts education, including vocal and instrumental ensembles, and an African dance troupe; and wellness and health, through art and music therapy. It has two, full-time paid staff members and half-dozen unpaid tutors. The church covers the $529,000 annual cost to run the program, designating more than half its budget to Anna’s Place and other outreach ministries. Each year St. Anna’s, which Terry describes as a working-class parish, starts with a deficit budget, and each year they finish in the black, through a combination of tithes, donations and grants.

“We are in a state of grace continually unfolding,” Terry said. 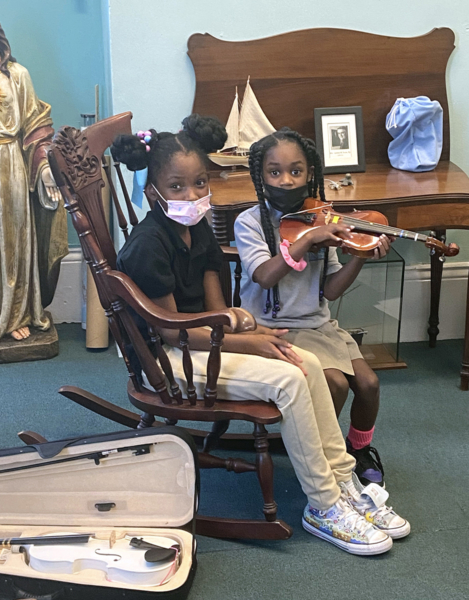 Lyriic (left), 8, and Cailey, 10, during a violin lesson provided by members of the Louisiana Philharmonic Orchestra. Courtesy of St. Anna’s Episcopal Church

About 1,000 kids have come through Anna’s Place, with some staying a short time and others for 10 years or more. Of the students the program has tracked or who have kept in touch with Durham, almost every student has stayed out of the juvenile justice system and in school, more than 95% have graduated from high school, almost all are working, and some are in college, he said.

One former participant is Derri Parker, now a freshman at Xavier University of Louisiana in New Orleans, where she is majoring in education. In an essay about her time at Anna’s Place, which she started attending when she was 7, Parker described her life before as “unbalanced and boring” and herself as someone who got bad grades “because I didn’t take homework seriously.” Thanks to Anna’s Place, she focused on her studies turned her grades around, graduating second in her high school class. She also now serves as subdeacon for the Anglo-Catholic parish, and on the vestry.

The program’s success comes from consistent engagement, having kids with them for 20 hours a week, plus interactions with their families, Durham said.

“And once they join, we do everything to keep them,” he said. On average it takes two years for a child “to trust and believe us,” since they so often have been failed by adults. At that point, he said, they can truly benefit from the academic enhancements and social skills education the program offers. “There is a sparkle in their eyes when they realize, hey, I have a future.”

Visits to the program’s local university partners allow Anna’s Place to introduce the possibility of attending college to students early on. “Five-, 6-, 7-year-olds are going into a college library, sitting in a college classroom. They can begin to see themselves in that setting,” Durham said. The program also offers field trips to the opera, visits to the New Orleans Museum of Art, as well as music lessons from members of the Louisiana Philharmonic Orchestra. “We want them to see that there is beauty in the world beyond their communities,” he said.

The only thing keeping more kids from benefiting is space in the church. Even Terry has to leave his office to make room for violin lessons. But those involved with Anna’s Place are working to change that.

In 2017 the church began the process to buy a large, historic – and dilapidated — house nearby, and plans were launched to renovate the space to provide room for an eventual quadrupling of the number of kids served by Anna’s Place, as well as space for community needs. The house was named Dodwell House Community Resource Center, after a former rector.

The Dodwell House Restoration Committee has raised about half the $4 million estimated cost to renovate the building, said the Rev. Leroy “Buck” Close, a deacon and the committee’s chair. In his pitch to potential donors, Close emphasizes “strengthening the community from the kids up.”

Anna’s place expects to add an additional 30 students to its after-school program next year.

Seeing a church like St. Anna’s so fully serving its community is nothing short of remarkable, Close said.

“It’s really something to see what St. Anna’s does without a safety net, endowment or rich parishioners,” he said.

— Melodie Woerman is a freelance writer and former director of communications for the Episcopal Diocese of Kansas.