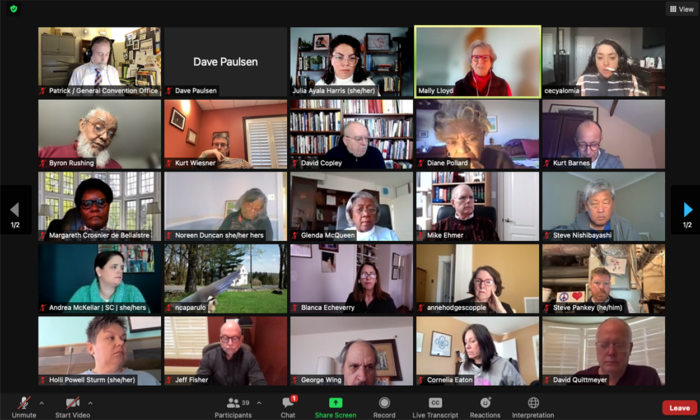 After three years of churchwide budget surpluses, council members considered how much of those funds will be needed to fill potential budget shortfalls, while voting to move a proposed $101 million budget for 2023-24 to the Joint Standing Committee on Program, Budget and Finance, reporting to the 80th General Convention.

Council also reviewed proposed updates to the parochial report, the statistics on attendance, membership and finances completed annually by congregations and filed by dioceses. And guest speakers shared poignant personal stories that underscored how the church still has work to do in supporting and welcoming historically marginalized groups, specifically transgender and nonbinary individuals and racial and ethnic minorities.

The pandemic also may have a lasting impact on some of the normal routines of church governance. Executive Council, the church’s governing body between meetings of General Convention, has not met fully in person since February 2020, when gathered in Salt Lake City, Utah, a month before the coronavirus began spreading worldwide. Going forward, interim bodies will be asked to conduct at least some of their meetings online to save money, as part of Executive Council’s plan for balancing the 2023-24 churchwide budget. Executive Council also is considering holding at least one of its six meetings online in the next two-year term.

“We have found how to do this virtually, as we are doing right now, and that is a significant cost savings,” Andrea McKellar, an Executive Council member from the Diocese of South Carolina, said in a budget presentation on Jan. 26.

The 80th General Convention was delayed by a year because of the pandemic, from 2021 to 2022. As plans move forward to hold the gathering in person this July in Baltimore, Maryland, the Rev. Gay Clark Jennings, president of the House of Deputies, told Executive Council this week that additional options are being considered for safeguarding attendees’ safety. Masks and proof of vaccination will be required, though the church’s presiding officers have not specified what other measures might be implemented.

The postponement of the General Convention was one reason the church ended the 2019-21 triennium with a surplus of more than $15 million, of which about $2.5 million was shifted to the 2022 budget to cover the expense of gathering in Baltimore. Expenses were further reduced during the pandemic because of restrictions on staff travel and in-person gatherings, and the church also received $3 million as one of the many U.S. employers that qualified for assistance from the federal Paycheck Protection Program.

The church’s annual surpluses aren’t expected to continue, and the draft of the 2023-24 budget that was introduced in October 2021 started with an $8 million shortfall. The Rev. Mally Lloyd, chair of the Finance Committee, said the departments of the Domestic and Foreign Missionary Society, The Episcopal Church’s corporate entity, were asked to look for ways to cut 5% of their budgets to help offset part of that shortfall. Churchwide staffing will remain at 152 employees.

Dioceses’ assessment payments generally have been in line with their pledges during the pandemic, but church officials warned of potential downturns and greater financial uncertainty in future years. On Jan. 27, Executive Council voted to use up to $5 million from the past triennium’s surplus to balance the proposed $101 million 2023-24.

“This budget draft reflects, we feel, a more realistic approach to what our capacity is in these next two years that we’re budgeting for,” Lloyd said.

Council is still deliberating over what to do with the remaining surplus. One option discussed would hold the money in reserve to help the church weather unforeseen financial crises. That topic will be taken up again in April when Executive Council is scheduled to meet in San Juan, Puerto Rico. The proposed budget, meanwhile, now advances to General Convention’s Joint Standing Committee on Program, Budget and Finance.

Executive Council has 40 voting members, including the presiding bishop and House of Deputies president. Twenty of the voting members – four bishops, four priests or deacons, and 12 laypeople – are elected by General Convention to six-year terms, with half of those members elected every three years. The other 18 are elected to six-year terms by The Episcopal Church’s nine provinces, with each province sending one ordained member and one lay member.

The church governing body devoted much of its final day’s session to a discussion of a revised parochial report, which was presented by the Rev. Chris Rankin-Williams, chair of the House of Deputies Committee on the State of the Church.

Rankin-Williams’ committee had been working on a revised parochial report even before the pandemic, focusing on new narrative questions that would encourage congregations to tell the fuller story of their ministries and community. The pandemic created a more immediate need to address short-term anomalies in canonically required data, such as average Sunday attendance, or ASA, because of periods in 2020 and 2021 when in-person worship was suspended.

As the church adjusts to the latest COVID-19 surge and nears the pandemic’s two-year mark, the 2022 parochial report will look forward with a focus on “the adaptive challenges facing the church,” Rankin-Williams told Executive Council. “It’s really a tool for the congregation that is filling it out, and it’s something that they can use to guide decisions for their future.”

Narrative questions remain a fixture of the 2022 parochial report approved by council members. The form will ask congregational leaders to summarize the opportunities and challenges they faced in the year and invite their stories of “naming, addressing and dismantling the injustices of racism in yourselves, congregations and your communities.”

Some data, like “communicants in good standing,” may continue to reflect pandemic conditions, since not all members could receive or felt comfortable receiving Communion. They still could be counted, if the pandemic gave them “good cause” for not receiving Communion, Rankin-Williams said.

The questions about online and hybrid worship services pertain to the ways those services are being offered and how attendance is counted – without yet expecting congregations to report precise numbers. Rankin-Williams cited the difficulty of comparing different measurements of online engagement, and “we don’t want ASA 2.0. We really want to get people to look at the ministry of the church more broadly.”

The 2022 report also will ask congregations to include the age and racial makeup of their memberships. The report’s addition of demographic data sparked a debate among council members over whether congregational leaders should record racial groups as a percentage of total membership or provide actual numbers of those individuals. Executive Council ultimately decided to ask for both percentages and numerical counts.

Executive Council’s first-day plenary session, on Jan. 25, included a 90-minute listening session with seven clergy and lay leaders who discussed how transgender and nonbinary individuals often feel alternately supported by and marginalized by The Episcopal Church. The plenary session on Jan. 26 featured a presentation by Brant Lee, an Episcopalian and law professor from the University of Akron in Ohio, who spoke about the racism and discrimination faced by Asian Americans and Pacific Islanders.

One of Lee’s central points was that Asian Americans throughout much of American history have been perceived incorrectly and, at times, maliciously as foreigners. They also are perceived as indistinguishable, even though there is no monolithic Asian American identity. Lee’s own ancestors came to the United States from China, bringing a culture and identity that was distinct from that of other Asian immigrant communities.

A member of the Presiding Officers’ Advisory Group on Beloved Community Implementation, Lee also said he thinks churchwide leaders like those on Executive Council generally understand racism and the persistence of racist systems. The question remains, what will the church and its members do to change those systems?

“You have to do something affirmatively to reverse the systems that are in place,” he said. “They will not fix themselves.”

During committee meetings, Executive Council members also discussed the latest obstacles to the church’s ongoing work toward supporting the financial sustainability of its dioceses in Latin America and the Caribbean, most of them within Province IX.

“We have to find a way to walk the dioceses away from the legacy of dependence,” said Honduras Bishop Lloyd Allen, an Executive Council member. Such efforts in his and the other Province IX dioceses have struggled in the face of entrenched poverty and the unpredictable impact of hurricanes and other natural disasters.

The pandemic has been particularly devastating to the people and economies of the region, with some experts warning that COVID-19 set back development in the countries of that region by as much as 20 years in their anti-poverty and economic development efforts.

“It is important to start speaking and talking about the effects on Latin America and the Caribbean due to the pandemic,” Blanca Echeverry, an Executive Council member from Colombia, said through an interpreter. “We have to analyze the real effects on the population and the real effects of the pandemic through these very difficult years.”