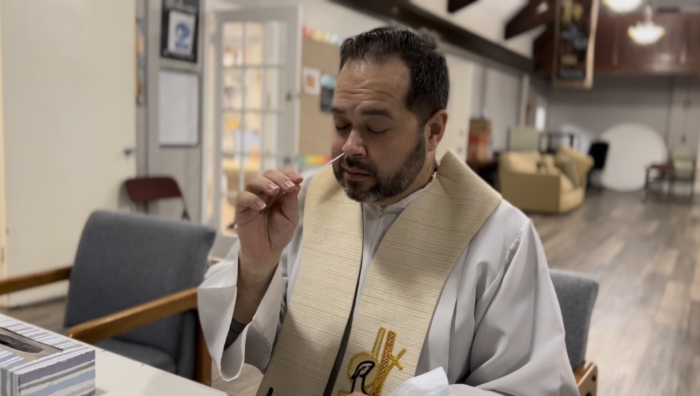 [Episcopal News Service] An Episcopal church in Orlando, Florida, is offering free COVID-19 tests at night to meet the needs of neighbors who can’t make it to daytime clinics because of work or child care responsibilities. With at-home tests in short supply and the omicron variant surging in Florida, Christ the King Episcopal Church/Iglesia Episcopal Jesus de Nazaret – two congregations worshiping in the same building – are adding the later hours “to make sure we’re hitting our most vulnerable neighbors,” said the Rev. José Rodríguez.

The night testing program is part of the church’s larger mission to address the effects of COVID-19 on its community, said Rodríguez, the vicar of Iglesia Episcopal Jesus de Nazaret and co-rector of Christ the King. The church has hosted vaccine clinics since the shots became available, administering over 2,500 doses, Rodríguez said. And it has been offering rapid tests in the mornings, which have been very popular, but many people who need them aren’t able to come during the day, especially when they have to wait in line.

“A lot of the workers were leaving because they had to get to work, and for child care,” Rodríguez told Episcopal News Service. Often, people who had to leave for work would be allowed to cut in line, but with “everyone sick and scared,” Rodríguez knew they had to do something different. The situation highlighted one of the many inequities of the pandemic in the United States: Many of the low-paid workers at in-person jobs who are most exposed to the virus cannot get paid time off to get tested or to isolate and recover if they test positive.

“We had a situation where a mother drove in, bawling her eyes out while she was waiting for her test results,” Rodríguez said. “I was like, ‘Ma’am, it’s going to be fine. You’ll recover quickly.’ And then she’s like, ‘No, no, no, I can’t afford to take time off from work if I’m sick.’ So it really led us to think hard about the impact on the worker, and throughout the pandemic our advocacy work has been based on the impact on workers and families.”

The church now offers testing from 6:30 to 10 p.m. on Friday, Saturday and Sunday, whereas none of the mass testing sites operated by the city of Orlando or Orange County test after 5 p.m. Though Rodríguez does distribute some at-home tests, he gives them out “sparingly, because those are like gold”; they are often expensive or out of stock in stores. 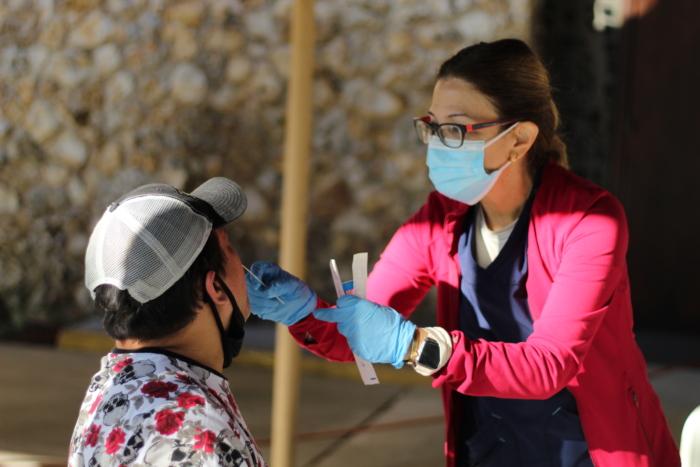 The church’s testing program is made possible by partnerships with a web of nonprofits and government agencies. The testing equipment is provided by the Florida Department of Health, but they would not provide testing personnel. Through his relationship with the local Mexican consulate, Rodríguez was able to get some of the nurses who do their testing to come to the church.

“So I had tests, I had nurses and doctors, but I had no funding” to pay the testers, he said. For that, he reached out to Hispanic Federation Florida & Southeast, which funded the initial round of night testing, which ran Jan. 19 through 22. During those three nights, nurses tested 406 people at the church, another testing site the partnership set up at a Hispanic supermarket, and an addiction recovery meeting.

Rodríguez has also partnered with the Central Florida chapter of the National Coalition of 100 Black Women on a pro-vaccination social media messaging campaign. Rodríguez and a local Roman Catholic priest, helped by a social media coordinator, “create pro-vaccine videos to go against anti-vaccine messaging, and we do it from a faith-based perspective.”

The church is able to form all these partnerships partly due to the assistance it received from Episcopal Relief & Development in the aftermath of Hurricane Maria in 2017, when many Puerto Ricans were re-settling in Florida.

“They built the capacity for Hurricane Maria, and we’ve kind of gone with it,” Rodríguez told ENS. “Before Episcopal Relief & Development helped us, we had nothing … They funded us generously for two years so we could serve Hurricane Maria survivors. They came in with some emergency funding for the earthquake survivors that were moving to Central Florida. And then we’ve just been going along with the relationships we’ve built.”

Rodríguez was worried about whether he could continue to get tests and funding to keep the program going, but on Jan. 24, the United Way committed to fund three more weekends of night testing “because they were really impressed by how we did it,” he told ENS, and the state health department will provide the tests.

“It was phenomenal,” Rodríguez said. “We’re just excited that our partnerships have lined up so we can keep moving forward.