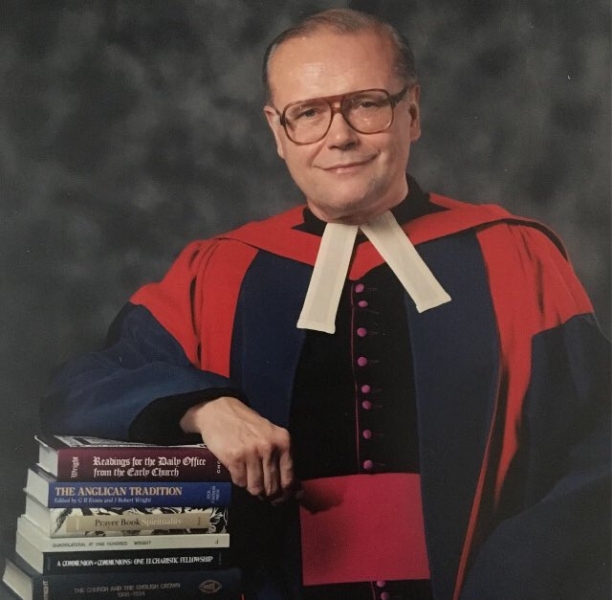 [Episcopal News Service] The Rev. J. Robert Wright, a retired General Theological Seminary professor who was known in The Episcopal Church for his work promoting ecumenical dialogue, died Jan. 12 at his home in New York. He was 85.

“As this Week of Prayer for Christian Unity closes it is with profound gratitude that we remember and honor J. Robert Wright. His work toward Christian unity shaped not only The Episcopal Church’s ecumenical engagement, but the movement itself,” said the Rev. Margaret Rose, ecumenical and interreligious deputy to the presiding bishop of The Episcopal Church.

“Because of him, countless Episcopal seminarians understand ecumenical work as vital to their ministries. Expressions of gratitude came into our office this week, from Christians across the country.”

“From his time as a student at GTS, through his time as professor and mentor, Father Wright was an inspiring teacher of church history and ecumenism at General for decades. In that role he also supported The Episcopal Church as an official historiographer and in his relationship with the Old Catholic Churches and the Iglesia Filipina Independiente,” wrote the Very Rev. Michael W. DeLashmutt, acting dean and president and associate professor of sacred theology at The General Theological Seminary, following Wright’s death.

“His passion for the legacy and future of Christian history was thorough and all encompassing; an inspiration and a standard in one way or another for all who studied with him,” DeLashmutt said.

Wright was known internationally for his engagement in ecumenical dialogues between The Episcopal Church, the Roman Catholic Church, Armenian Apostolic and Russian Orthodox, the Evangelical Lutheran Church in America, the Old Catholics and the Philippine Independent Church, among other churches. He was the principal Episcopal author of the Called to Common Mission accord with the Evangelical Lutheran Church in America.

“Bob was my introduction to formal ecumenical work when he invited me to serve as secretary on the New York Diocesan Committee on Relations with the Russian Orthodox Church in 1998. I became his research assistant and typist for the final stage of his work on the Called to Common Mission full communion agreement with the ELCA, and I collaborated on his history of St. Thomas Fifth Avenue, his volume of patristic commentary on scripture, and several book projects and articles that remained unpublished,” Richard J. Mammana, The Episcopal Church’s associate for ecumenical and interreligious relations, told Episcopal News Service.

“He was the major American Anglican ecumenical leader of the second half of the twentieth century, and he opened doors everywhere. It is not uncommon to have a Lutheran, a Roman Catholic, an Orthodox Christian, or a member of another church ask ‘Do you know Bob Wright?’ and immediately a working friendship will begin based on his decades of ecumenical work,” he said.
Born on Oct. 20, 1936, Wright attended The University of the South in Sewanee, Tennessee. He also studied at Oxford University and the Pontifical Institute of Medieval Studies in Toronto, Canada. He would become the longest-tenured faculty member at GTS.

“For many years at the seminary, Wright taught a class on liturgical celebration, otherwise known as ‘Mass class.’ The class was a ‘rite of passage’ for many at General Seminary, quite distinct from the more sober class on pastoral liturgy taught by his colleague Thomas Talley,” wrote the Rt. Rev. John Bauerschmidt, bishop of Tennessee, co-chair of the Anglican-Roman Catholic Theological Consultation in the United States of America and a former student of Wright’s, in a tribute published in The Living Church.

Wright’s ashes will be interred at the Cathedral of St. John the Divine in New York. A public thanksgiving of his life will be scheduled later.