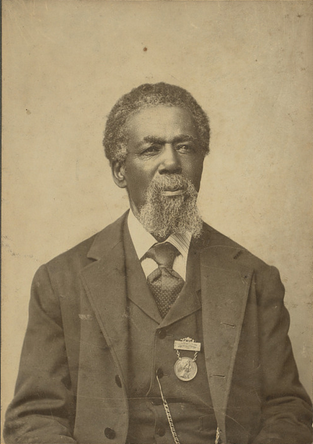 Thomas Mundy Peterson cast his ballot at City Hall in Perth Amboy, New Jersey, on March 31, 1870, making him the first African American to vote in a U.S. election under the provisions of the 15th Amendment, whose ratification was certified the day before. Photo: Wikipedia

[Episcopal News Service] As hopes of passing federal voting rights legislation become increasingly dim, a historic Episcopal parish points to a long-ago member as a symbol of the struggle.

Thomas Mundy Peterson was 36 years old on March 31, 1870, when he became the first African American to vote in a U.S. election under the provisions of the 15th Amendment, which prohibits denying or abridging of the right to vote “on account of race, color, or previous condition of servitude.”

The election at City Hall in Perth Amboy, New Jersey, was the first held anywhere in the United States the day after the ratification of the 15th Amendment was certified. It asked voters to decide whether to revise the city’s charter or change to a township form of government.

Peterson, who died in 1904, was a member of St. Peter’s and is buried in the churchyard along with his wife, Daphne. St. Peter’s was founded in 1685, two years after Scottish colonists settled in the area, making it New Jersey’s oldest Episcopal congregation.

Peterson’s historic vote came in a city that had once been both a major slave importation port and a major stop on the Underground Railroad. Peterson, New Jersey born and raised, was the grandson of slaves and the son of a woman who was freed before he was born. Slavery had been legal in the state until January 1866.

Peterson reportedly liked to describe how one white man, upon seeing him vote that day, ripped up his own ballot and declared that the franchise was worthless if a Black man was allowed to vote.

By the late 1870s, states, mainly in the South, began to enact laws discriminating against Black voters. Those barriers were eliminated by the Voting Rights Act of 1965 until 2013 when the U.S. Supreme Court struck down a key provision of the law that required federal approval before some states and other jurisdictions could change their voting regulations. Divided along ideological lines, with the core of the disagreement whether racial minorities continue to face barriers to voting in states with a history of discrimination, the court’s conservative majority said that protection was no longer needed. 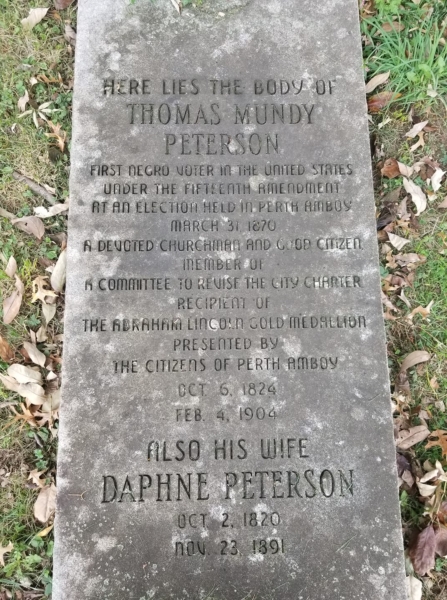 States immediately began rewriting their laws to effectively restrict voting access. In 2021, states passed 52 restrictive voter laws. In addition to making voting harder and taking away some powers of local election officials, the new laws are also said to have fueled widespread doubts about the integrity of American elections and politicized parts of the democratic process once seen as inviolate.

The Episcopal Church has long advocated for voting rights and protested attempts to make it harder for people to vote. The Executive Council in October reaffirmed that stance, decrying the efforts of state legislatures to restrict voting access and urged all dioceses, particularly those dioceses in states whose legislatures are actively pursuing legislation that is specifically designed to restrict access to voting, to advocate for equal access to vote. It urged individual Episcopalians to work for voting rights legislation.

In later life, Peterson credited his employer, T. L. Kearny, for encouraging him to go vote that day in 1870. Peterson recalled that he “did not think of voting until [Kearny] came out to the stable where I was attending to the horses and advised me to go to the polls and exercise a citizen’s privilege.” He said that as he arrived to vote “one man offered me a ticket bearing the words ‘revised charter’ and another one marked, ‘no charter.’ I thought I would not vote to give up our charter after holding it so long: so, I chose a revised charter ballot.”

The proposed revision passed 230-63. When the revision later had to be tweaked, Peterson was one of seven men appointed to a committee to do the work.

“The Office of Government Relations and Episcopalians joining us across the United States continue to advocate for voting rights for all eligible Americans. We support the Freedom to Vote Act, the John Lewis Voting Rights Advancement Act, and all efforts to ensure that Americans are able to cast their ballot,” Rebecca Linder Blachly, the office’s director, told Episcopal News Service.

“We also recognize that voter engagement is essential, and so to add to our existing efforts to get out the vote, we recently launched the Episcopal Election Activator program, which offers a chance for local Episcopalians to mobilize their communities to participate in our elections.”

In the above video, Presiding Bishop Michael Curry encourages Americans to vote.

The program seeks volunteers to help promote non-partisan voter engagement efforts for the 2022 U.S. midterm elections and beyond.

“The Election Activator program is an exciting opportunity for Episcopalians to volunteer with our office and network across the country to, as Bishop Curry has said, get souls to the polls,” said Alan Yarborough, church relations officer for the Office of Government Relations. “I would ask two things of Episcopalians—first to write their members of Congress using our action alert to urge passage of effective voting rights legislation. Second, if you want to do more to increase voter participation, sign up as an Election Activator.”

Richardson, who portrays Peterson during the annual Halloween graveyard tour at St. Peter’s, would agree. “I think he would be surprised that we’re going backward,” he said.

“He would probably say that we cannot let this happen; that you’ve got to let your congressman know that this is not the way this country should be going – not backwards.” 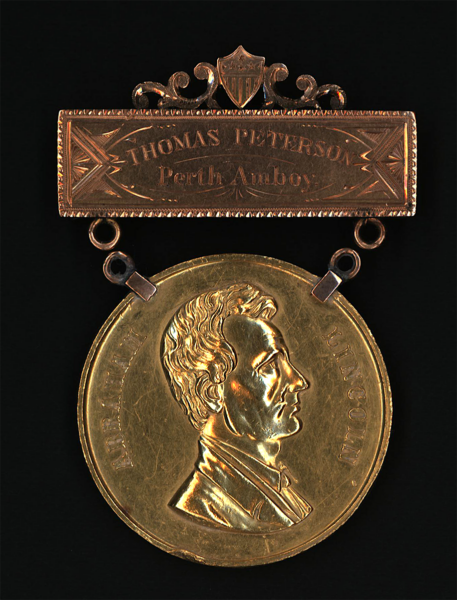 Perth Amboy residents raised $70 in 1884 (more than $1,900 in today’s dollars) to give Thomas Mundy Peterson a gold medallion featuring Abraham Lincoln to commemorate his historic participation in the city election 14 years earlier. Xavier University of Louisiana, a historical Black and Roman Catholic College, acquired it in 1948. Photo: Wikipedia

The House of Representatives on Jan. 13 passed a combination of the Freedom to Vote Act and the John Lewis Voting Rights Advancement Act and sent the new bill to the Senate. All 50 Democratic senators say they favor passing voting rights legislation, but their 50 Republican counterparts do not. The filibuster rule requires 60 votes to pass most legislation, making passage of a voting rights bill difficult.

On Jan. 11, President Joe Biden called for a change to the filibuster rule as it pertains to elections legislation. However, two Democratic senators who held the keys to that change – Joe Manchin of West Virginia and Kyrsten Sinema of Arizona said on Jan. 13 they will not support the move.

The Office of Government Relations recently noted that it cannot advocate on the filibuster debate because The Episcopal Church has not taken a stance on the rule. “But we can continue to underscore the importance of voting and the need for federal legislation to counteract recent bills in many statehouses that have sought to restrict or limit the right to vote,” the office wrote in its December 2021 advocacy newsletter.