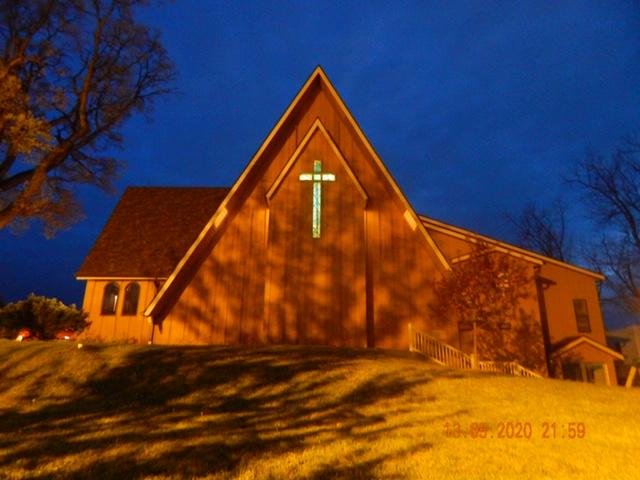 The Episcopal Church of Christ the King, Huntington, in the Diocese of Northern Indiana, is part of the first cohort of the Church Buildings for Collaborative Partnerships project.

[Diocese of Indianapolis] The Rev. Drew Downs and the people of St. Stephen’s in Terre Haute, Indiana, are stewards of a big, old church building that can be hard to keep humming. When Bishop Jennifer Baskerville-Burrows started talking about the ways in which such buildings could be transformed into assets, “that idea instantly spoke to some of us,” he said.

Several months and a $1 million grant from Lilly Endowment Inc. later, St. Stephen’s and 13 other Episcopal parishes across the state are deep into a program that will help them develop the vision and skills to make better use of their buildings. The Church Buildings for Collaborative Partnerships project, funded by a three-year grant from the endowment’s Thriving Congregations Initiative, welcomed its first cohort in June and will launch its second with 12 congregations later this month.

The program will eventually encompass four cohorts and provide instruction and coaching to every Episcopal congregation in the state of Indiana. It is rooted in the simple notion that if congregations made better use of their buildings, they could serve God’s mission more effectively, foster deeper relationships in their communities, and possibly develop additional mission-supporting streams of income.

If the membership of the first cohort is any indication, that idea appeals to congregations of all sizes, in all kinds of settings, ranging from large urban churches with space to spare, such as St. Stephen’s, to rural and small-town churches ministering in tighter quarters.

“We are a very small parish with an elderly demographic, so we are naturally seeking ways that we can move into the future, and one of the things we have been kicking around at vestry meetings and among ourselves was how can we use the building in different ways,” said Meg Moss, a member of the CBCP team from Christ the King, Huntington, in the Diocese of Northern Indiana. “So when this came up it seemed like a really good fit and we were excited about that.”

Drawing on tools, training and coaching from Partners for Sacred Places and Indiana Landmarks, participants in the program—which requires a nine-to-12-month commitment—are learning a variety of skills including assessing the space-sharing potential of their buildings and grounds; cultivating relationships with potential community partners, and improving their ability to speak about the impact of their ministries on their community.

“The CBCP project helps teams from participating churches learn to describe their best attributes and tell others about them, to the end that more ministry and impact will occur,” said Linda Buskirk, the program’s director. “Confidence and optimism build as congregations gain a more positive sense of the community value of their spaces.”

Putting church buildings at the service of community needs is not a new idea. Members of the team from St. Thomas, Franklin, in the Diocese of Indianapolis knew this well when they attended the program. In the mid-1990s the Rev. Judith A. Culpepper, a priest who was also doctor, served at the church, as did the Ven. Alice Goshorn, the diocese’s former archdeacon, who was married to a doctor. The two couples and a few volunteers established a free medical clinic with drop-in hours one day a week. The St. Thomas Clinic is now in its 26th year, has a separate director and separate steering committee from the church and writes grants to support itself.

Still, the Rev. Whitney Smith, the church’s rector said, the opportunity to use their building “as an asset that could be used for community connections that didn’t exist yet” appealed to them, and that after the first training session, the team held a scavenger hunt that led them to experience their property differently.

“I went to a nursery space, which is huge, and has a jungle gym, playground and a working kitchen,” he said. “Somebody else went to the vacant deacon’s office, and we began to come up with ideas. So the process has begun.”

Other participants say the challenge of looking at familiar space with new eyes has led them to think differently, not just about their buildings, but also about their mission and ministries.

“Our outreach committee tithes 10% of our operating budget to our community,” said Susan Gooden, a member of the team from St. John’s Church, Mount Vernon, in the Diocese of Indianapolis. “But we’ve never really done anything except donate money to them. [The program] made us reevaluate that list of partnerships as to how we might provide a different kind of partnership than those just based on money.”

A similar reevaluation is underway at Christ the King. The congregation currently donates space to a daycare center but is not deeply involved in its day-to-day operation. “We would like to supplement this ministry with something that would make use of our other spaces and perhaps involve the congregation and a community collaboration in ways the daycare doesn’t,” Moss said.

In addition to classroom work and one-on-one interviews between leaders of the congregation and Partners for Sacred Places’ project staff, the CBCP program includes a three-hour site visit by members of the project staff.

Smith said the visit at St. Thomas, Franklin, consisted of three parts, including a rigorous assessment of his parish’s property; an hour-long conversation about its potential uses; and what he described as an eye-opening conversation with a community leader who had an encyclopedic command of the needs of numerous nonprofit agencies in the region.

“We haven’t made any decisions,” about potential community partners, Smith said. “But we definitely have some ideas.”

The process of preparing for the site visit can be challenging.

Gooden said she spoke with the directors of a variety of local social service providers in the public and private sectors, the leaders of local schools, and a township trustee. Then just when she thought she had made a survey of community needs, the local homeless shelter closed.

“We are very concerned about poverty here,” she said. “It is a very poor county. There is no place for children, for the elderly and the homeless. But we can’t do all of that. We have to focus.”

St Stephen’s in Terre Haute has both significant space to offer in its old building and a focus of ministry suggested by its location on the edge of the Indiana State University campus in the city’s arts corridor. But Downs said the church’s aging physical plant presents problems of its own.

“There is part of me that is kind of embarrassed on our behalf that some of these rooms, we don’t have any use for them. … We have an old nursery that has essentially become a closet and a couple of families did some work on it, but there is a leak and it smells bad,” Downs said.

“My first thought was that [during the site visit] I am going to be embarrassed to show this space. Then I had to take a step back and realize that it was important to say what is actually here. To say, it’s used as a closet, but we want it to be a room again. If you can envision something here. We would love to see what we can make here. That became a different image, more collaborative, not me trying to sell you something.”

Not every site visit provokes a deep reckoning with a parish’s capabilities and limitations, but the process of convening community leaders both brings local congregations to their attention and begins the process of narrowing down the kinds of initiatives a congregation might consider hosting.

Christ the King invited the head of senior services in Huntington County, the head of Love, Inc., which works among those living in poverty and isolation, and the director of the Parkview Huntington Foundation.

“We discussed community needs, gaps that we might consider filling, and areas of collaboration to explore,” Moss said. “We fielded such possibilities as a monthly [at first] adult day care afternoon with a healing service and hymn or song singalong, providing transportation to hospital appointments, and launching a program to help users of the food pantry at Love Inc. to use and cook unfamiliar ingredients in one-pot meals using our daycare kitchen.

“Everyone left feeling connected and enthusiastic,” she said. “At the very least we have surfaced in the community as a congregation with the will and desire to fill a need.”

In the coming months, when their projects have come into focus, congregations in each cohort will be eligible to apply for planning and capital grants to make key investments to their buildings.  Congregations that complete the program will be included in a statewide, web-based inventory listing the spaces congregations have to offer.