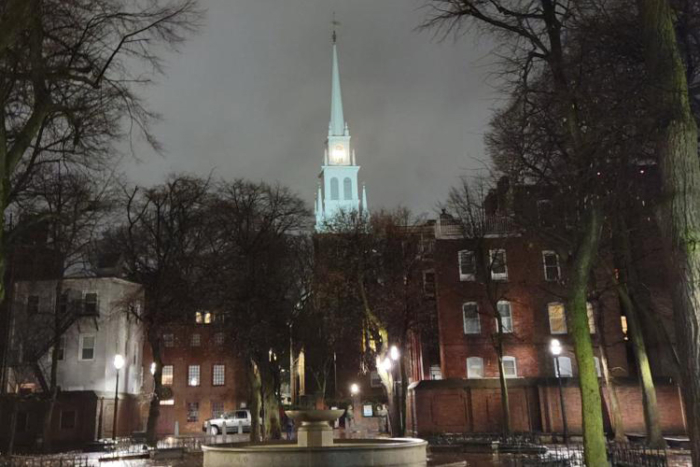 The steeple glows atop Old North Church in Boston, Massachusetts, on Jan. 5 after its lanterns were lit in support of American democracy. Photo: Diocese of Massachusetts

[Episcopal News Service] Old North Church in Boston, Massachusetts, is best known as the illuminated focal point of Paul Revere’s 1775 ride at the start of the American Revolution – “one, if by land, and two, if by sea,” as immortalized in Henry Wadsworth Longfellow’s poem. The church is still an active Episcopal congregation, and on Jan. 5, it lit its historic lanterns with a new message, in support of American democracy on the eve of the anniversary of the deadly attack on the U.S. Capitol.

The lanterns were lit in a ceremony attended by the Rev. Matthew Cadwell, the church’s vicar, as well as Massachusetts Bishop Alan Gates and Bishop Suffragan Gayle Harris. Secretary of the Commonwealth of Massachusetts William Galvin, who oversees the state’s elections, also was present, along with election workers.

“Two lanterns famously shone from the steeple of the Old North Church on the night of April 18, 1775,” Cadwell said in a joint statement with the bishops, released by the diocese. “Inspired by those beacons lighting the way for American freedom and democracy, we continue to cherish and hold sacred the hard-fought values and ideals of our nation, even as we grow in deepening understanding of who we are called to be together.”

Galvin highlighted the moment’s significance for future elections. “Once again the lights in this steeple shine from this historic church on this evening as a light to the nation,” he said, “to illuminate a path forward to warn and call us to action to defend American democracy by protecting the integrity of our electoral process and those throughout the nation who honestly administer it.”

Solemn commemorations are taking place in Washington, D.C., on Jan. 6 as the nation marks a year since a mob of then-President Donald Trump’s supporters stormed and breached the Capitol while Congress was inside certifying Joe Biden as the winner of the November 2020 presidential election. The riot followed Trump’s monthslong efforts to sow doubt in the election’s legitimacy by promoting false claims of voter fraud, including at a large rally on Jan. 6, 2021, right before his supporters attacked the Capitol.

One Capitol Police officer and four rioters died, and about 140 officers were injured in the riot. It succeeded in disrupting the certification of the election for several hours, but Congress returned later that evening to confirm Biden as the next president after the insurrectionists were cleared and security was restored.

“In memory of those killed on Jan. 6, 2021, and in support of the noblest ideals of our beloved nation, the Old North Church lights its sacred lanterns again tonight, signaling to all that the lights of freedom and democracy continue to shine brightly in our city, Commonwealth, and nation,” Cadwell said. “We pray that these lights lead us all to clearer vision, better understanding, and deeper reverence for the institutions of our democracy.”

Presiding Bishop Michael Curry participated in a livestreamed midday service Jan. 6 at the Church of the Epiphany in Washington and planned to release a video address to the nation later in the day.

President Biden and Vice President Kamala Harris spoke in the morning Jan. 6 from the Capitol’s Statuary Hall. Biden urged Americans not to believe the “web of lies” that Trump and his supporters continue to spread about the attack a year ago and the election.

“Here’s the truth: The election of 2020 was the greatest demonstration of democracy in the history of this country,” Biden said. “More of you voted in that election than have ever voted in all of American history.” He warned against the widespread efforts of Republican state leaders to rewrite election laws in ways that could decrease turnout and give partisan officials greater say in the outcomes.

At least 52 such restrictive laws were enacted in 2021, according to an analysis by FiveThirtyEight, including a Georgia law that makes it a crime to give water to voters waiting in line and a Texas law that would limit election officials’ authority to curb inappropriate behavior by poll watchers.

The Episcopal Church supports passage of federal voting reforms that would improve ballot access and ensure fair elections. General Convention, for example, passed a resolution in 2018 opposing voter suppression, and the Office of Government Relations’ Episcopal Public Policy Network has encouraged Episcopalians to call on Congress to pass the voting protections contained in the proposed For the People Act, which the Senate is expected to take up this month.