Archbishop of Canterbury Justin Welby has paid tribute to Archbishop Emeritus of Cape Town Desmond Tutu who has died at the age of 90.

The death of Archbishop Emeritus Desmond Tutu (always known as Arch) is news that we receive with profound sadness – but also with profound gratitude as we reflect upon his life. My prayers and condolences are with his family and all who loved him, with the Anglican Church of the Province of Southern Africa, and all of the people of South Africa.

Arch’s love transformed the lives of politicians and priests, township dwellers and world leaders. The world is different because of this man. 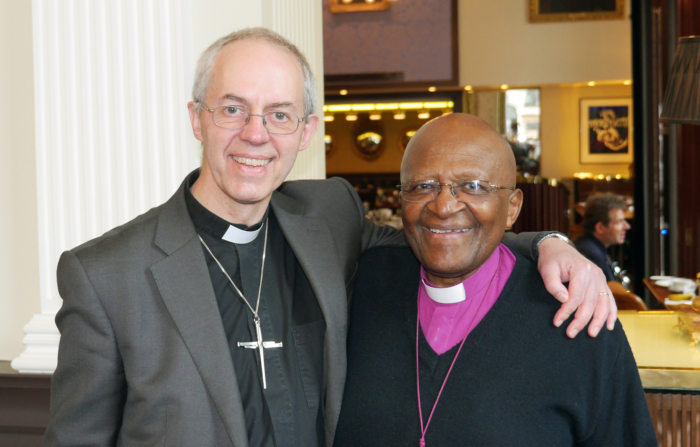 Archbishop Tutu was a prophet and priest, a man of words and action, one who embodied the hope and joy that were the foundations of his life. He was a man of extraordinary personal courage and bravery: when the police burst into Capetown Cathedral, he defied them by dancing down the aisle.

He was a man of enormous vision: seeing the possibilities for building the Rainbow Nation long before anyone else, except perhaps President Mandela.

His vision and bravery were allied with a canny political sense and wisdom, enabling him to be a healer and apostle of peace while so many still saw wounds and war.

He was a pioneer, the first Black Archbishop of Capetown, the pioneer of the Truth and Reconciliation Commission.

He was a great warrior for justice who never stopped fighting – whether it was for those in his own country, for inclusivity in the South African Constitution, or for those suffering injustice around the world.

When you were in parts of the world where there was little Anglican presence and people weren’t sure what the Anglican church was, it was enough to say “It’s the Church that Desmond Tutu belongs to” – a testimony to the international reputation he had and the respect with which he was held.

Most of all he was a Christian disciple – that was the root of everything else.

After meeting him, many would speak of being in the presence of one who brought God close to them. His joy, grace, laughter, hope and life caught up those around him with a sense of Jesus Christ.

His greatest love is now realised as he meets his Lord face to face.

We are thankful today for such a life so well lived, even as we feel the sorrow of such great loss.