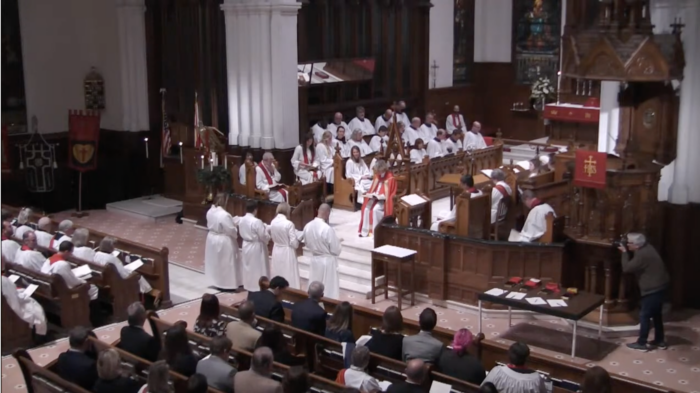 The Rev. Sarah Watts, the Rev. Susan Oakes, the Rev. Sally Herring and the Rev. Jose Fernandez present themselves for ordination to the priesthood at the Cathedral Church of the Advent in Birmingham, Alabama, on Dec. 7, 2021. Video screenshot: Diocese of Alabama

[Episcopal News Service] The ordination of an openly gay, married priest at the Diocese of Alabama’s cathedral has reopened a rift between the diocesan bishop, who approved the priest for ordination, and the dean of the cathedral, who opposes the ordination of non-celibate gay people and says he inadvertently hosted a ceremony he disapproved of.

On Dec. 7, four transitional deacons from around the diocese were ordained priests at the Cathedral Church of the Advent in Birmingham. In the days after the service, several blogs covering Episcopal and Anglican topics published posts saying that one of the ordinands was a married gay man, and that Interim Dean Craig Smalley reversed the cathedral’s position on sexuality by participating in the service. Smalley responded by saying that Bishop Glenda Curry had not told him about the ordinand and that the Advent – as it is commonly referred to – only hosted the ceremony on behalf of the diocese. Smalley was listed in the program as master of ceremonies, and other Advent clergy participated in the service, which Curry officiated.

Smalley and the cathedral’s vestry have said they espouse an “evangelical expression of Anglicanism” that emphasizes the authority of Scripture and traditional Anglican teachings. Among them are opposition to homosexual activity and the ordination of people in same-sex relationships, positions which The Episcopal Church has rejected but other Anglican Communion churches still profess.

The bloggers’ accusations prompted Curry and Smalley to issue statements in response, each explaining their side of the situation and referring to a covenant the diocese and the cathedral had signed earlier this year to protect the “theological expression” of the cathedral’s clergy and congregants. Neither statement named the priest nor mentioned the topic of sexuality, and both Smalley and Curry criticized the bloggers for inflaming tensions and reporting inaccuracies.

“Sadly, there are people that see reconciliation and unity and want to break it apart,” Curry wrote in response on Dec. 11. “I love the Advent. The Diocese of Alabama loves the Advent. Just this week in our diocesan cycle of prayer, we prayed for the Advent. I am committed to the covenant between the diocese and the Advent.”

Two days earlier, Smalley wrote to his congregation, saying, “Those who are misrepresenting that the theological position of the Advent has changed are doing so at best out of ignorance, or at worst in an attempt to harm and divide the Advent and for their own personal gain.

“Yesterday, we learned through blog posts that one of those ordained has theological views that are very different than those of the Advent,” Smalley added. “First, the Advent has not changed its theological position. In fact, the entire point of the Covenant with the Diocese earlier this year was to protect and preserve the Advent’s ability to maintain its theological beliefs within the Diocese of Alabama. … Second, none of the clergy, staff, wardens, or vestry knew anything about those who were being ordained. The ordination was a Diocesan event that was vetted and planned by the Diocese, but was held at the Advent because of its role as the Cathedral of the Diocese. … Third, this incident has revealed systemic failures at the Advent and the Diocese in how we interact together as the Cathedral.”

In her response, Curry said she had not forced the Advent to change its position, and that the ordination of an approved candidate for the priesthood in the diocese did not violate the covenant.

“Ordination is a well-established process in the Episcopal Church that was followed in the same manner in this instance as in previous ordinations at the Advent over many years,” Curry wrote. “This was not the first time that someone with a theological expression different from the Advent has been ordained in our diocese and at the Advent.

“I do not view the Advent hosting an ordination service at the Cathedral of the diocese as endorsing any ordinand’s particular theological expression, but instead is an expression of their hospitality and commitment to our diocesan community. I did not fail to communicate an issue because there did not appear to be an issue to communicate. The Advent was not asked to do anything to endorse or sponsor a theological viewpoint.”

Curry declined to answer questions from Episcopal News Service about the communications surrounding the ordination and previous ordinations at the cathedral, and Smalley did not respond.

The Rev. Jose Fernandez, one of the priests ordained at the cathedral, is an associate priest at the Episcopal Church of the Holy Apostles in Hoover, a suburb just south of Birmingham. When he was ordained a transitional deacon on April 30, Atlanta Bishop Rob Wright, who has known him for more than 20 years, gave the sermon. He talked about meeting Fernandez and his husband at the Cathedral Church of St. John the Divine in New York City, and telling Fernandez he would be welcome as an openly gay man in the church. Fernandez did not respond to a message from ENS.

This is not the first time the Advent’s conservative positions have put it at odds with the diocese and The Episcopal Church. In 2003, when General Convention approved the election of Gene Robinson as bishop of New Hampshire, then-dean, the Very Rev. Paul Zahl, flew a black flag outside the cathedral in protest.

In 2006, then-dean, the Very Rev. Frank Limehouse III, along with the vestry and other clergy, published a document called “Speaking the Truth in Love,” which outlined their “theological position” on sexuality and marriage. In it, the cathedral leaders upheld a 1998 Lambeth Conference resolution stating that sex is reserved for marriage between a man and woman, that “homosexual practice [is] incompatible with Scripture” and that people in same-sex partnerships should not be married or ordained. They also criticized Episcopal leaders who deviated from it and expressed a desire for a closer relationship with the archbishop of Canterbury and other Anglican Communion bishops.

In 2012, another former dean left The Episcopal Church to become a Roman Catholic priest. More recently, in May 2021, Dean Andrew Pearson, resigned, giving a variety of reasons in an interview with AL.com that detailed the conflict between the cathedral and the diocese.

For over a decade, the Advent had allowed members to designate their pledges as “Advent Only” if they wanted to avoid supporting the diocese and The Episcopal Church. Pearson had also been using a liturgy he himself reworked that incorporated elements from the 1662 Book of Common Prayer. He told Alabama.com former Bishop Kee Sloan, who retired in January, and Curry had asked him to stop the Advent-only donations and only use the 1979 Book of Common Prayer. Instead, Pearson resigned and joined the Anglican Church in North America, and has since started a new church in Birmingham.

In June, after Pearson’s resignation, Curry signed a covenant with Smalley – who served as the cathedral’s canon pastor before becoming interim dean – and the cathedral’s vestry laying out the terms of their relationship.

“The relationship of the Advent and the Diocese has at times been uneasy,” the diocese wrote when the covenant was announced. “In recent decades, The Episcopal Church has moved toward a more progressive theological understanding, while the Advent has purposefully retained a Protestant, evangelical expression.”

Among other things, the covenant specifies that the Advent will use the 1979 Book of Common Prayer and no longer offer an Advent-only donation option. It also contains sections about “theological expression” but never mentions sexuality, or the ordination or marriage of LGBTQ+ people.

“The Diocese understands that the Advent’s evangelical identity is rooted in Scripture being its primary authority… The Bishop affirms and agrees that the Advent will have the freedom to express its theology and conduct its ministries in a manner consistent with the above-described theological expression,” the covenant says.

In his letter, Smalley claimed that the diocese breached their covenant by not telling him about Fernandez, though his description of the covenant does not specifically match its text.

“The Diocese failed to inform the Advent of this issue even though the Bishop had agreed that the Advent would not be asked to participate in, sponsor, or otherwise be seen to endorse an event that was incompatible with a traditional view of Scripture, or do anything that would assert, suggest, or imply that the Advent approved, condoned, or authorized such theological expressions,” he wrote.

A 1994 General Convention resolution banned discrimination in access to the ordination discernment process based on marital or family status, sex and sexual orientation, among other categories. However, the constitutions and canons of some dioceses still officially ban the ordination of anyone who is neither in a heterosexual marriage nor celibate, including Albany, Dallas and Central Florida – all of which also officially ban same-sex marriages, although clergy can perform them under the guidance of a different bishop under a provision in General Convention Resolution B012.

Alabama’s canons do not contain either of these bans, but as clarified under B012, individual parish clergy are under no obligation to host any ceremonies or sacramental celebrations that they object to, such as a same-sex wedding or the ordination of an LGBTQ+ person. The covenant specifies that the Advent is treated as its own parish in addition to being the seat of the diocese.

In his letter, Smalley wrote that the Advent will review how it interacts with the diocese, but did not give specifics about what that might entail.

“Although we are disappointed in and deeply grieved by the Diocese’s failure to communicate this issue to the Advent, as leaders of this parish we must also recognize that we should have done more to investigate this issue on our end. Accordingly, we will be conducting a full review of this issue to ensure that we have systems and agreements in place to ensure that this does not happen in the future,” he wrote.