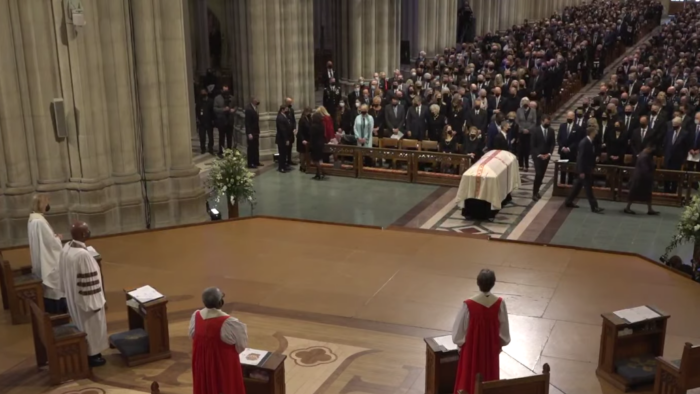 Presiding Bishop Michael Curry, center at bottom, and Washington Bishop Mariann Budde, bottom right, officiate at the funeral of Bob Dole on Dec. 10 at Washington National Cathedral, as seen on the cathedral’s livestream.

Presiding Bishop Michael Curry and Washington Bishop Mariann Budde officiated at the service, and President Joe Biden was among the eulogists.

“Bob Dole was one of the greatest of the greatest generation, a patriot who always placed country above partisanship and politics,” the Very Rev. Randy Hollerith, the cathedral’s dean, said in welcoming the invitation-only crowd to the service. “While we mourn his loss, we gather this morning to give thanks for and to celebrate his extraordinary life.”

Dole, 98, died Dec. 5 after revealing in February that he had lung cancer. He served for 36 years in Congress, as a representative and then senator, and he was the Republican nominee for vice president in 1976 and for president in 1996. He also served in the Army during World War II and was wounded in combat in Italy. 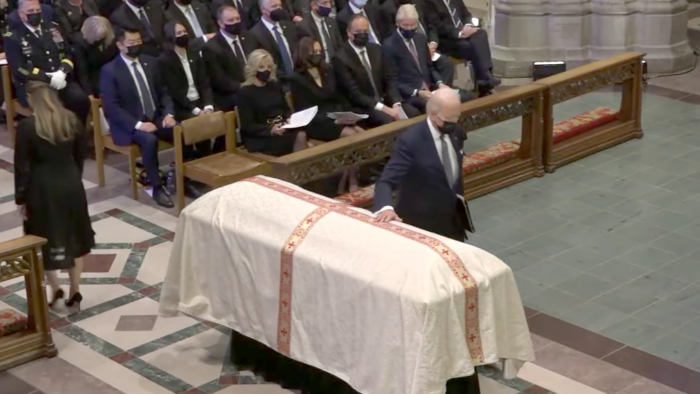 President Joe Biden passes the casket of Bob Dole to deliver a eulogy at Dole’s funeral Dec. 10 at Washington National Cathedral, as seen on the cathedral’s livestream.

“God, what courage Bob Dole had,” Biden said in recounting Dole’s patriotism and heroism, as well as his service to his country. “He understood that we’re all a part of something much bigger than ourselves.” Biden, a Democrat, served for more than 20 years with Dole in the Senate.

“I salute you, my friend. Your nation salutes you.”

The funeral took place five weeks after people gathered in the cathedral to honor another American political icon, Colin Powell, the former Army general and secretary of state, who died Oct. 18 at 84 of COVID-19 complications. Powell was a lifelong Episcopalian, while Dole grew up attending United Methodist Church services.

Four presidential funerals have been held at Washington National Cathedral, most recently for President George H.W. Bush in December 2018.

Dole’s daughter Robin Dole also shared fond memories of her father, before concluding with a passage from a “farewell letter” that Dole had composed with a former staff member, to be released after his death.

“As I make the final walk on my life’s journey, I do so without fear because I know that I will again not be walking alone. I know that God will be walking with me,” Bob Dole wrote. “I also confess that I am a bit curious to learn if I am correct in thinking that heaven will look a lot like Kansas, and to see, like others who have gone before me, if I will still be able to vote in Chicago.”