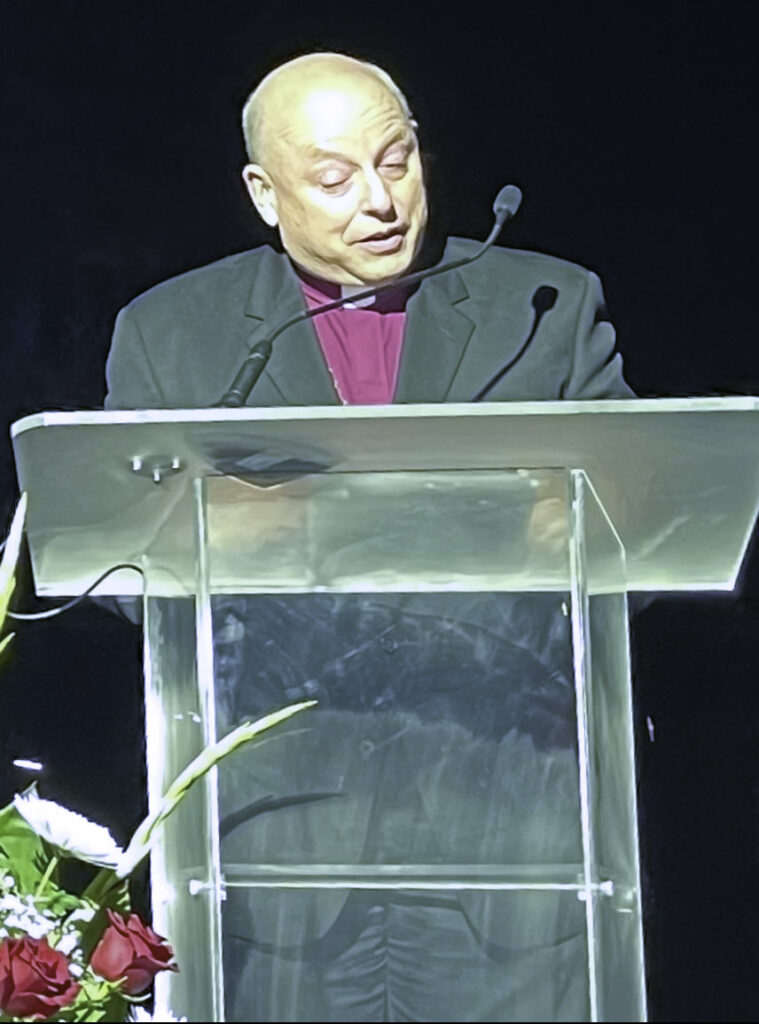 “Through the worst years of the crisis, every two weeks I was going to a funeral,” Kimmler, 73, said following a Dec. 1 World AIDS Day candlelight commemoration during which many of the departed – for whom he continues to pray at a meditation altar in his Silver Lake home – “came into my mind in waves. I cried three or four times, remembering people I knew and loved, and mindful that this level of loss is not unique to me but is the experience of many around the world.”

“Through the worst years of the crisis, every two weeks I was going to a funeral,” Kimmler, 74, said following a Dec. 1 World AIDS Day candlelight commemoration during which many of the departed – for whom he continues to pray at a meditation altar in his Silver Lake home – “came into my mind in waves. I cried three or four times, remembering people I knew and loved, and mindful that this level of loss is not unique to me but is the experience of many around the world.”

The evening gathering marked the rededication of The Wall/Las Memorias monument in East L.A.’s Lincoln Park, a program that Bishop John Harvey Taylor opened with an invocation delivered in both English and Spanish. “God of love and ultimate healing, Dios omnipotente, we gather in the midst of pandemic and recall our pandemic of fear, bigotry, and neglect 40 years ago. The Wall Las Memorias AIDS Monument bears more names of your precious children than it should…. May this monument be an enduring reminder of everyone we lost to HIV-AIDS as well as everything we learned. By your grace, whenever our neighbor is sick or in need, we will resolve to listen rather than lecture, help rather than judge, and act always in the name of your justice, mercy, and love.” (See full text of prayer below.) 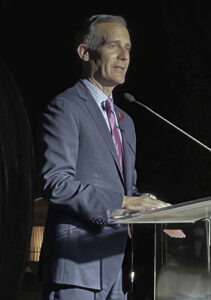 The first publicly funded HIV-AIDS memorial, The Wall Las Memorias was recently refurbished after receiving $850,000 in county and city funding. The monument first opened in 2004 after Zaldivar overcame a decade of opposition to the project he first conceptualized in 1993 after losing a close friend to AIDS. 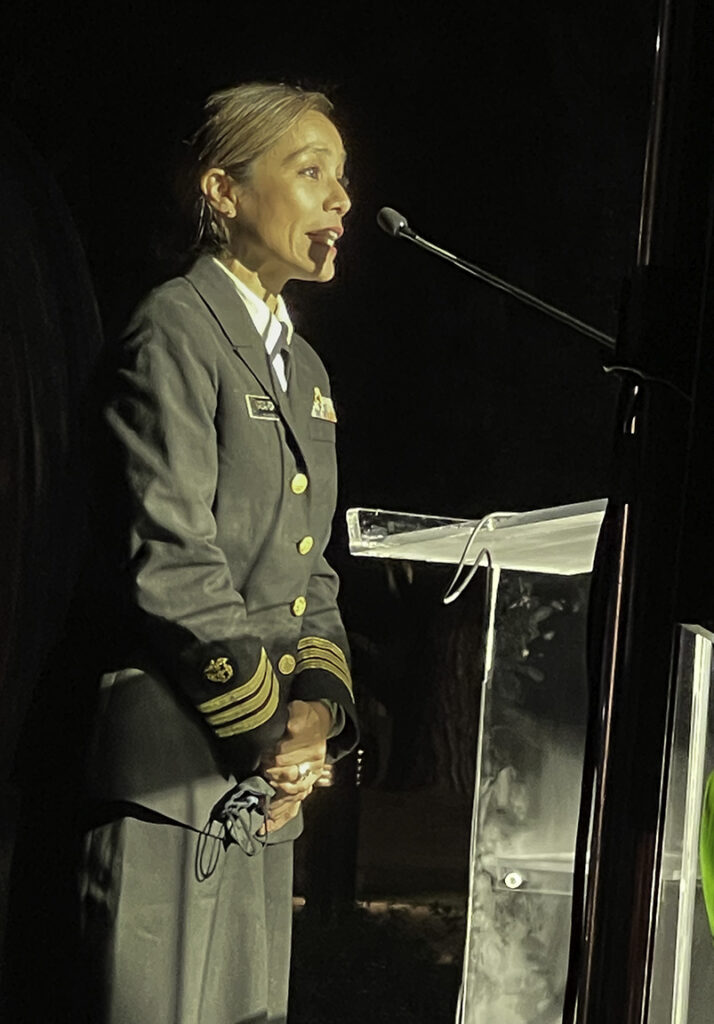 Speakers included Commander Michelle Sandoval-Rosario of the office of the U.S. deputy secretary for health, who emphasized the importance of continuing to lower the HIV-AIDS infection rate particularly among underserved communities of color, currently a matter of fighting two pandemics: HIV-AIDS within the current context of COVID-19. Sandoval-Rosario joined fellow presenters in citing statistics: In 2020, an estimated 37 million people worldwide were living with HIV-AIDS, which claimed 680,000 lives globally that year. Approximately 50,000 live with HIV-AIDS in Los Angeles County.

Sandoval-Rosario is among organizers of an L.A. County forum of faith-based leaders working to prevent new infections of HIV-AIDS and other sexually transmitted diseases in underserved communities. The Episcopal Diocese of Los Angeles has been represented in this effort and in a Nov. 9 public-engagement symposium. 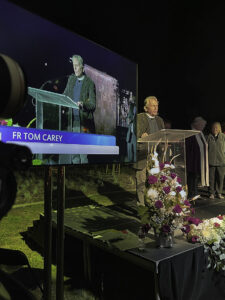 The Very Rev. Tom Carey, vicar of nearby Epiphany Church, Lincoln Heights, and dean of Deanery 4, joins in interfaith offering of prayers.

Among the hundreds of names etched into the granite panels of The Wall Las Memorias is that of the Rev. Robert Kettlehack, who died in 1989 and was the first priest of the Episcopal Diocese of Los Angeles to succumb to AIDS. His ashes are interred at St. Thomas the Apostle Church in Hollywood where he assisted in ministry with the late Rev. Carroll Barbour, rector, well known for his extensive pastoral care to those living with HIV/AIDS. St. Thomas’ Church is also home to St. Damien’s Chapel, which contains the diocesan Book of Remembrance of several thousand names of those who died with HIV/AIDS. 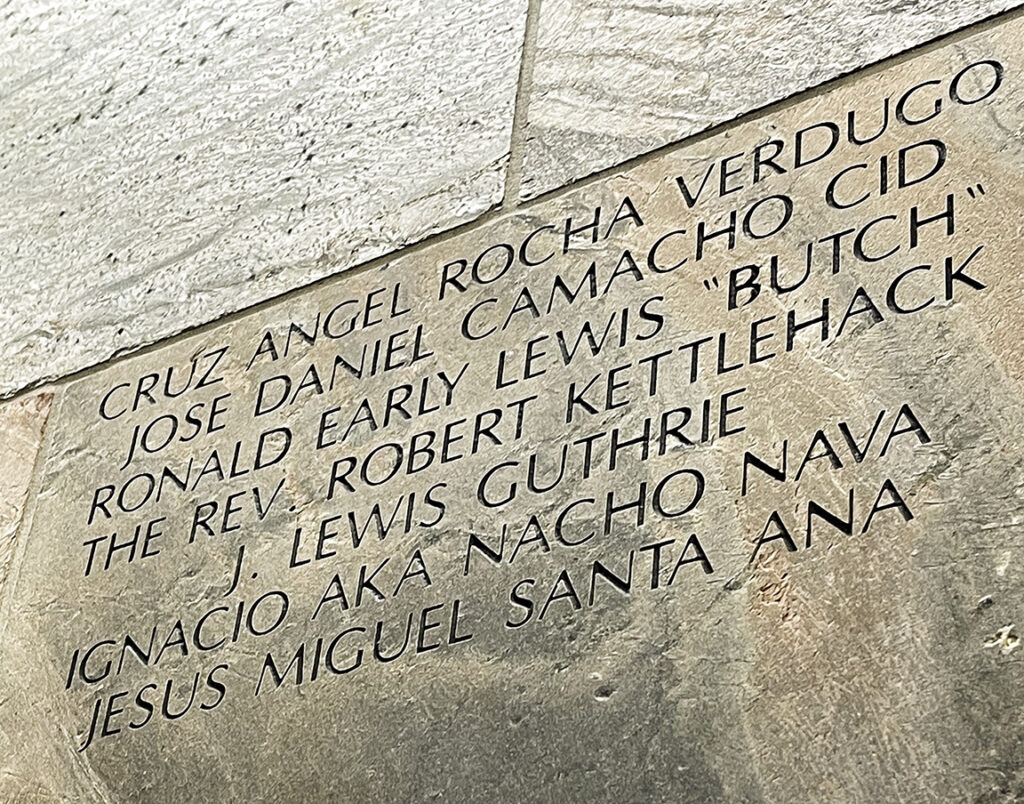 Etched on the wall are names of some of those remembered within the Diocese of Los Angeles, including the Rev. Robert Kettlehack, the first priest of the diocese to succumb, in 1989, to HIV/AIDS. He was the life partner of the late Canon Jack Plimpton, longtime executive director of the Bishop’s Commission on AIDS Ministries. Photo: Bob Williams

Kettlehack’s late life partner, Canon Jack Plimpton – a former Los Angeles Unified School District administrator whom Bishop Frederick H. Borsch named executive director of diocesan HIV/AIDS ministries in 1989 – was compelled by his experience with Kettlehack’s care to devote the rest of his working years to serving those living with the virus, and to assist their caregivers.

One of the major initiatives that Plimpton launched and coordinated was the construction of 165 units of affordable housing for those living with HIV/AIDS. Organized as a separate non-profit known as Project New Hope, the nonsectarian network of seven apartment complexes continues today in San Pedro, Santa Monica, Palos Verdes, and districts of Los Angeles including Silver Lake and Mid-City.

Key project managers in the development of these complexes included April Grayson Talton, wife of retired Bishop Suffragan Chet Talton. In a recent interview with The News, she underscored the importance of Plimpton’s role in the challenging work building the residences that faced significant public opposition. “What Jack did is really, really important,” Talton said. “He saw the need for housing and made it happen. He was the heart and soul of Project New Hope and its mission.”

Talton recalled one of her most memorable moments in building – from the ground up – a 25-unit mid-city Project New Hope residence for individuals and families living with HIV/AIDS. “I watched that project grow from a vacant lot to a completed structure, and I actually got to hand the keys out to each of the new tenants. I still remember the look on their faces walking into their new homes after not having a place to live for some time. It was powerful.”

Looking back, “it was a completely different time,” she added. “First and foremost, there was such a stigma attached to AIDS, and Project New Hope was doing something that other organizations were not, saying that people have options and supportive services, especially after they returned from extended hospitalizations, being laid off from jobs, and losing their homes. Project New Hope helped them in the practical ways they most needed.” 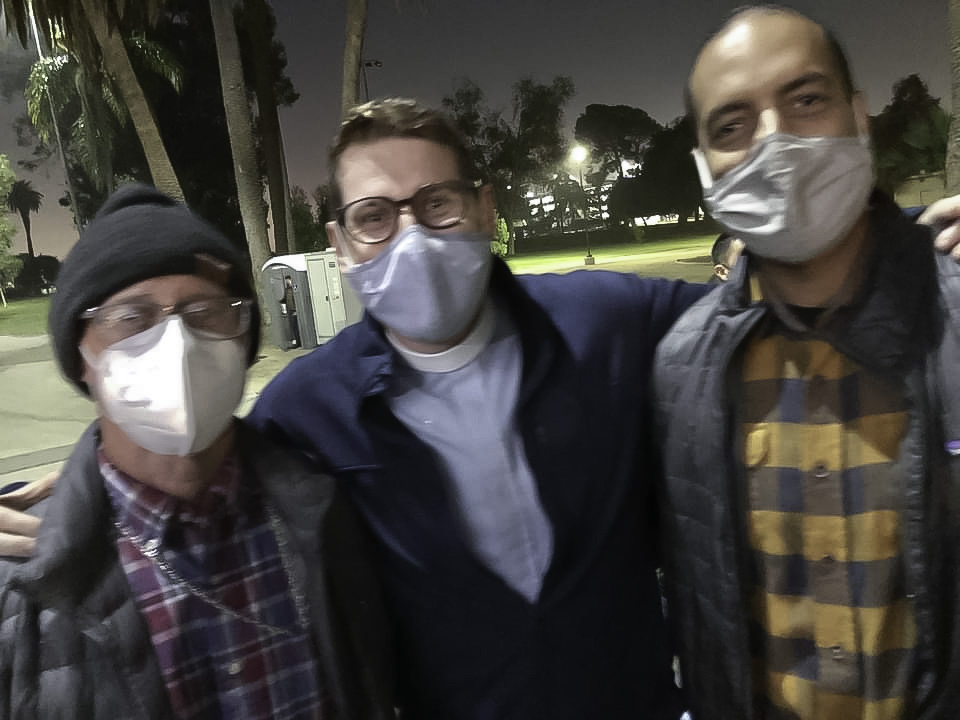 Kimmler – whom the late Rt. Rev. Oliver B. Garver Jr. in 1986 named the first chairperson of the Bishop’s Commission on AIDS Ministries in the Diocese of Los Angeles – agrees about the intensity of prejudice at the time.

“It was bad enough being queer,” he recalled, “but then it was doubly intense for those carrying the disease and being blamed for its transmission. Right-wing Christians were so virulent in their opposition and fear that they wanted those living with HIV/AIDS to be isolated in internment camps such as those of World War II. I was a horrible time, with injustices made plain by ACT UP and other advocacy groups.”

Consciousness-raising was a priority for the Bishop’s Commission, Kimmler said, pointing to the invaluable role of the annual diocesan AIDS Masses hosted by different congregations across the Southland. St. Augustine’s by-the-Sea in Santa Monica offered the first AIDS Mass, held in 1985 with guiding participation by the late Rev. Canon Malcolm Boyd, who at the time was the parish’s writer/poet-in-residence in tandem with his well known advocacy for the wider LGBTQ community.

Other congregations played key roles, including St. Athanasius in Echo Park, where the late J. Jon Bruno was rector before being elected bishop diocesan. Bruno’s wife, Mary, a human resources specialist, joined in providing data-entry job opportunities among pastoral care and other services provided by the parish. Nearby, Trinity Church Melrose was the site of Trinity Learning Center, which provided job training in computer skills as a program of Project New Hope. Trinity’s rector at the time, the Rev. Mac Thigpen, was then named by the late Rt. Rev. Frederick Borsch to serve as first chairperson of the Bishop’s Commission on Gay and Lesbian Ministries, now known as GLEAM. Another Los Angeles parish, All Saints in Highland Park, also provided strong support of persons living with HIV/AIDS and their caregivers in ministries led by then-rector Bill Leeson.

In Pasadena, the All Saints AIDS Service Center was launched as a major ministry of All Saints Church. Led by board members including Canon Jim White and with the Rev. Albert Ogle as executive director, the center grew to provide a wide range of health care and counseling services. Its annual Pasadena Posada candlelight walk was a significant fundraiser and source of hope and comfort for participants. The center’s publication, Asklepios (named for the Greek god of medicine), was an important journal of record and encouragement within the ministries.

On the Westside, All Saints Parish in Beverly Hills also provided substantial support to parish and diocesan HIV/AIDS ministries, which were outlined in a presentation to Archbishop of Canterbury George Carey during his 1996 visit to the church. Among ministries shared by numerous congregations was the weekly lunch program through which volunteers prepared and served sandwiches to patients receiving treatments at L.A. County-USC Medical Center, and to their accompanying caregivers.

Kimmler also underscores the role the Diocese of Los Angeles played in partnership with the wider Episcopal Church during the height of the AIDS crisis. One such achievement was the diocese’s partnering with the Presiding Bishop’s Fund for World Relief (now Episcopal Relief and Development) to provide the then-fledgling AIDS Project Los Angeles (APLA) with one of the first program grants that enabled the agency to advance significantly in subsequent fundraising. “That was a big deal, and I was so proud of our church,” Kimmler recalled. 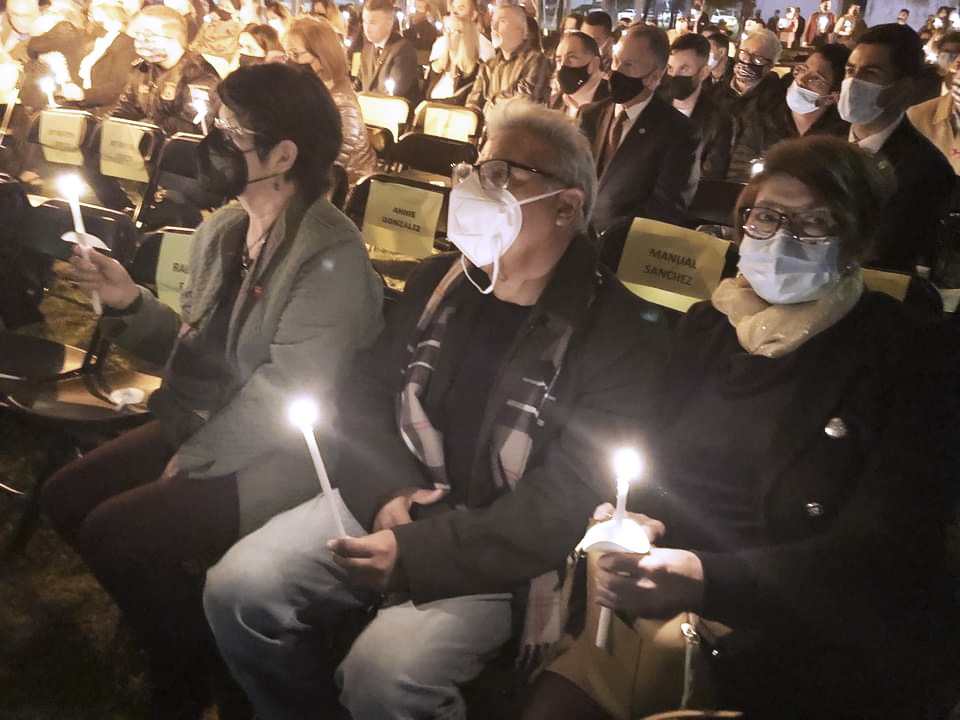 Attendees at the Dec. 1 rededication of The Wall Las Memorias hold lighted candles in remembrance of those who died with HIV/AIDS. Photo: Bob Williams

Kimmler was also an early member of the National Episcopal AIDS Coalition (NEAC). “Los Angeles joined New York, San Francisco and Washington D.C. in providing leadership models not only for other metropolitan dioceses, but also for local congregations, including those which were experiencing opposition to these ministries,” Kimmler said.

Encouraged by then-Presiding Bishop Edmond Browning and his famous theme, “There shall be no outcasts in this church,” NEAC members partnered with the denomination-wide Executive Council to make “listening visits” across the church, “both learning what people were doing and also encouraging what was possible to add,” Kimmler said. “This was especially important for priests asking what to do in situations where bishops and other leaders were against or fearful of AIDS/HIV ministries. From Puerto Rico to Seattle and on Native American grounds in the Tetons, we listened and we learned. It was a profound experience to find out what the church was doing and what the congregations needed.”

Kimmler noted that among the two-year NEAC and Executive Council listening project participants was the Rev. Jerry Anderson, who retired in 2016 after 13 years as director of pastoral care at L.A.’s Good Samaritan Hospital, now PIH Good Samaritan. Anderson is the author of the 2019 book Ordained by Angels: A Memoir of an AIDS Chaplain, which captures the intensity and depth of experiences during the pandemic.

In the Southland, “one of the priorities of the Bishop’s Commission was creating systems in congregations so that they could take care of people in their areas,” Kimmler said. Local resources were also made available through annual LGBTQ pride events among other venues.

Reflecting again on The Wall Las Memorias commemoration, Kimmler said he appreciates the interest that younger generations have taken in learning about and empathizing with the crisis that was “before their time, rather like learning about World War II without living through it. In retrospect, during the height of the AIDS crisis, we did not have time to fully engage the emotions we felt. That came later. At the time, we were busy trying to make a difference for those so desperately in need of support, trying to be as strong as we possibly could.”

— Bob Williams serves the Diocese of Los Angeles as canon for common life. He was director of ENS from 2004 to 2008.