[Religion News Service – Woodstock, Illinois] On a cold, cloudy afternoon in late November, two dozen volunteers were busy unloading a truckload of food in the parking lot just south of St. Anne’s Episcopal Church, setting out a table filled with produce, staples and other groceries for that day’s drive-thru mobile food pantry.

Despite the temperature hovering near freezing, Mike Phillips, a member of nearby Grace Lutheran Church, seemed thrilled to be there. The pantry was just opening, and already, close to a dozen cars were lining up.

“If it stays like this all winter,” he told another volunteer with a smile, “it will be great.”Across the parking lot, Scott Jewett, area manager for the Northern Illinois Food Bank, was directing traffic. As cars drove up, volunteers brought groceries to them, part of COVID-19 safety precautions. On this Monday, 169 families — 363 adults and 257 kids — will pick up groceries.

The mobile food pantry, which has been running twice a month at St. Anne’s since the beginning of the year, got its start after a nearby nonprofit lost its building and shut down its food program. Staff at the food bank reached out to the Rev. Cathy Daharsh, pastor of Bethany Lutheran Church in nearby Crystal Lake and chair of a network of local pastors.

Those pastors and their churches agreed to team up, with St. Anne’s hosting the mobile market, while Bethany and other congregations, like Church of the Holy Apostles in nearby McHenry, supplying volunteers and funding.

“During the pandemic, we wanted to roll up our sleeves and say, ‘how can we help?’” Daharsh said. “It really pushed us to collaborate.”

“The last 18 months have been unprecedented in terms of need,” she said. “COVID and all the related disruptions have really devastated the finances for so many of our families.”

Northern Illinois Food Bank, founded in the early 1980s by a Roman Catholic nun named Sister Rosemarie Burian, works closely with faith-based groups such as St. Anne’s, the Islamic Circle of North America, as well as a suburban Jewish community center. Several megachurches pitch in to help, as do smaller congregations.

Sister Rosemarie had “a beautiful soul” said Yurko, but was also a “spitfire,” working tirelessly to get the food bank off the ground with the help of a single mom named Mary Hayes. (Hayes’ son, Sean, became an actor, best known for playing the role of Jack McFarland in the television show “Will and Grace.”)

“Last year, we distributed 100 million meals,” said Yurko. “If there is not a lot of love and providence in that, I don’t know where it is.”

Ramping up food distributions in the middle of a pandemic required creativity and flexibility. Northern Illinois Food Bank set up an online program called My Pantry Express, which allows people to order groceries like fresh produce, dairy, meat and staples online, then pick them up at distribution sites set up at local schools, churches, resale shops and even at a local Walmart in the Chicago suburbs.

Food programs in other parts of the country have also innovated or expanded programs during the pandemic. In Washington, D.C., a food pantry run by the Father McKenna Center recently began partnering with a nearby predominantly Black Baptist church to deliver food to a group of seniors in the church, while in rural Stearns, Kentucky, the Lord’s Cafe, a free restaurant run by the small congregation at Crossroads Community Baptist Church, overcame supply-chain headaches and rising inflation to serve more than 1,500 meals to its community for Thanksgiving. The cafe, which has served free sit-down lunches three days a week for years, also moved to a drive-thru model during COVID, Grant Hasty, pastor of Crossroads Church, told Religion News Service. 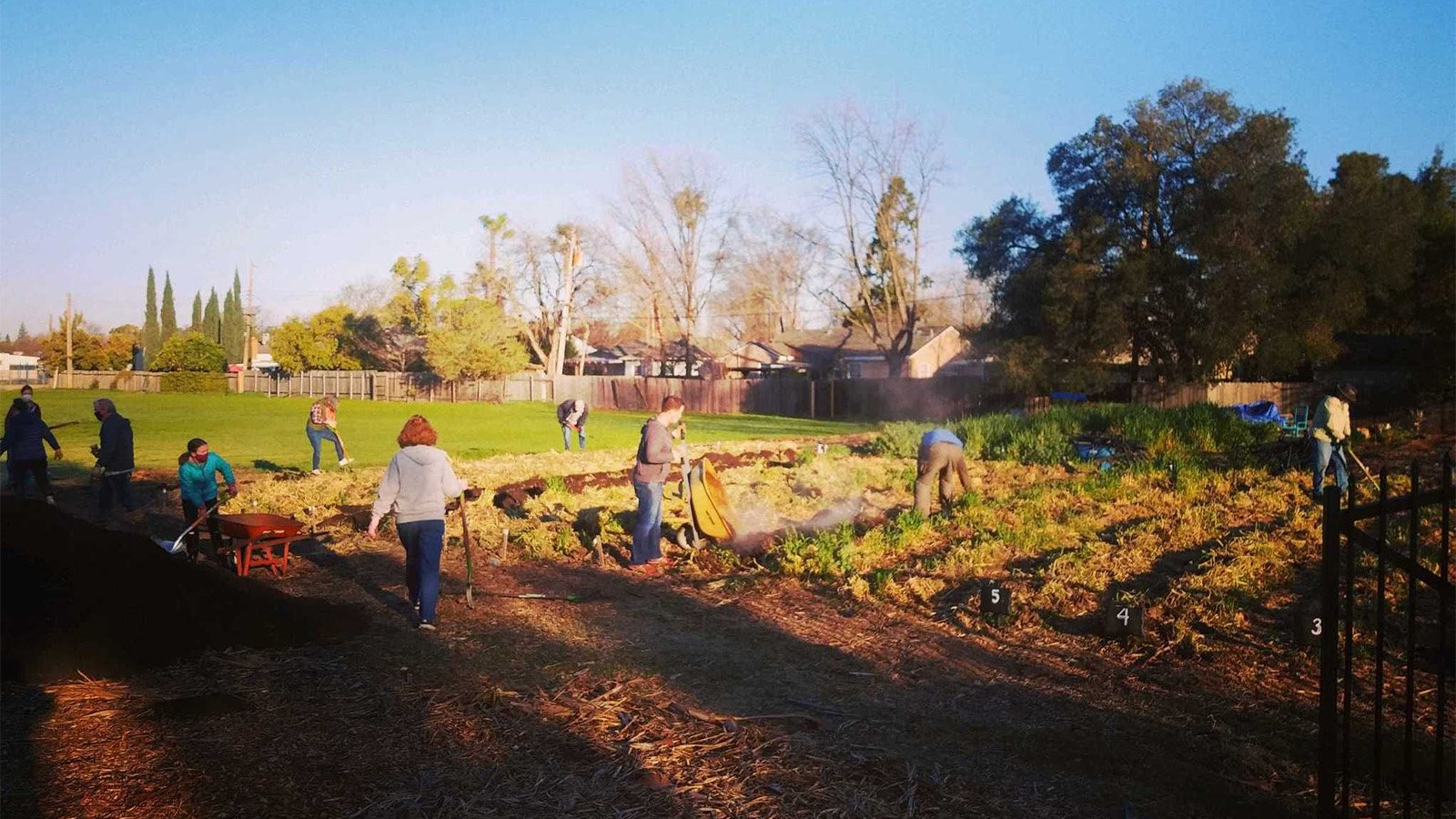 In Sacramento, California, volunteers at a faith-based community garden donated 2,000 pounds of produce this past summer to a local interfaith food bank. The garden is part of a project run by Table Farm & Table Bread, which has ties to a nearby United Methodist congregation.

The group sees growing food as part of spiritual practice, said Chloe McElyea, one of the group’s co-leaders.

Volunteers start their time with a moment of reflection and tend about 50 growing beds on a plot of land rented for a dollar a year from a local Catholic school. The Table Farm grows vegetables and flowers, some of which go to a subscription service for neighbors and some of which goes to charity.

The garden is part of a larger vision for creating community, said McElyea, who is also on staff at The Table United Methodist Church. The group inherited leadership of the local community garden after the person who used to run it moved. McElyea said the church is also in the process of renovating its kitchen in order to start a micro-bakery in the community.

Delivering freshly grown produce like squash, beans, tomatoes and kale, which has just been picked, to a local food pantry has been a real joy, she said. She recalls that her co-leader showed up with crates filled with what she called “beautiful, magenta eggplants,” and was surrounded by people even before getting to the door. One woman, she said, was particularly thrilled by the chance to get some of the produce.

“The eggplant was this beautiful, precious thing that she could use in her cooking in a way that was exciting,” she said. “It just really tapped into the beauty of food and how food reaches us on so many different levels and across cultures.”

St. Anne’s has tried to provide a mix of food, including staples, vegetables, frozen meat, along with eggs and dairy. In summer and fall, they get additional fresh produce from local farms and community gardens through connections made over the past year by Dick Hattan, a retired health care executive and member of St. Anne’s, who organizes the biweekly pantry. Some days, produce that was just picked that morning has ended up at the pantry.

While a recent study showed that churches have lost about half of their volunteers during COVID, interest in working at the pantry at St. Anne’s remains high, with 50 or so volunteers involved on a rotating basis, said Hattan. Sometimes, he has more volunteers than he can use.

“With the food distribution, people feel they’re doing something,” he said. “There’s a need that’s being filled. They’re seeing people, looking in their eyes, helping them out. That’s good stuff,” Hattan said.

Jewett’s involvement at the Northern Illinois Food Bank is professional, personal and spiritual. He began working at the food bank about a decade after a career in the restaurant business. He’s been both a staff person and someone who received food from the food bank — after a restaurant business he ran closed during the great recession, his family relied on groceries from a food pantry for a while.

His faith also plays a role. Jewett said that helping others is wired in the DNA of Christianity and other faiths — in his role, he works with Christian, Muslim and Jewish groups. When religious groups decide to collaborate, he said, they can do a world of good.

“It seems most of us agree that the need to help people is a common theme that everyone could work together on,” he said. “That’s been pretty awesome.”