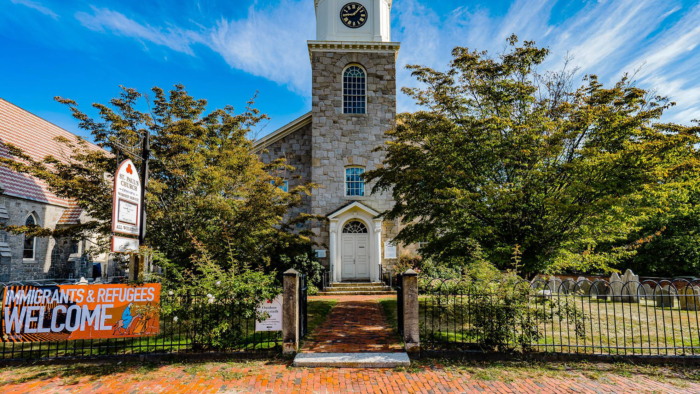 St. Paul’s Episcopal Church in Newburyport, Massachusetts, converted classroom and meeting space into temporary living quarters for Afghan evacuees who are being welcomed to the community. Photo: St. Paul’s, via Facebook

[Episcopal News Service] Starting next week, a church in Massachusetts will begin opening its doors to Afghan evacuees, as a family of 13 is scheduled to arrive Dec. 6 and take up temporary residence at St. Paul’s Episcopal Church in Newburyport, north of Boston.

A second Afghan family, with 11 members, soon will be hosted by St. Paul’s as well, part of the congregation’s response to a churchwide call to “welcome the stranger” as the United States accommodates 50,000 Afghans who fled their home country after the Taliban took control in August.

“It is a privilege to offer support for these families in such a crucial way,” the Rev. Jarred Mercer, rector at St. Paul’s, told the Salem News. “The call to do all we can to love and support these friends, whose lives have been put in grave danger in their home country because of their relationship to ours, is a moral imperative of our time.”

Mercer’s congregation converted classroom and meeting space at St. Paul’s into temporary living quarters while an immigrant support organization, the International Institute of New England, works to find permanent housing for the families. Mercer told the Salem News that the church is still lining up donations of beds, a crib, linens, towels and toiletries to help the new arrivals feel at home.

Episcopal churches across the United States are stepping up in a variety of ways to help the evacuees, who were allowed into the country under a humanitarian parole program. In Oklahoma, Episcopal volunteers are welcoming Afghan families at the airport in Oklahoma City. An Episcopal congregation in Watertown, Wisconsin, recently helped fill two moving trucks and five cars with supplies for refugees staying at Wisconsin’s Fort McCoy. A New Mexico congregation launched a donation drive for supplies, while a Wyoming congregation has taken steps to sponsor an Afghan family in Casper.

Some Episcopalians and congregations are providing direct support to the 11 local affiliates of Episcopal Migration Ministries, or EMM, which is coordinating The Episcopal Church’s efforts to serve these new neighbors. Episcopalians in cities without an EMM affiliate still can lend a hand by connecting with affiliates of one of the other eight resettlement agencies.

The humanitarian parole program is separate from the refugee resettlement program that EMM and the other agencies facilitate on behalf of the State Department, though the agencies plan to provide services to Afghan evacuees similar to what has been provided since 1980 through the refugee resettlement program. Those services include English language and cultural orientation classes, employment services, school enrollment, and initial assistance with housing and transportation.

EMM also has invited Episcopalians and their congregations and dioceses to support that work by making donations online to the Neighbors Welcome: Afghan Allies Fund and by volunteering in other ways, which they can do through an online form.

In Newburyport, a coastal city of 18,000 about 45 minutes from downtown Boston, St. Paul’s has been working with International Institute of New England since August, when the United States expedited the end of its 20-year war in Afghanistan and withdrew troops from the country.

Some Afghans fled to the United States through the special immigrant visa program, which is open to people who fear persecution for their work in support of the U.S. government. The humanitarian parole program is intended to accommodate others arriving amid the recent crisis in Afghanistan who do not yet have legal residency status. Once in the U.S., some may be able to apply for special immigrant visas, while others will apply for asylum.

“This is a time for our whole community to come together, and in this season of giving and generosity, to do all we can to support these arrivals who are in such great need,” Mercer told the Salem News.