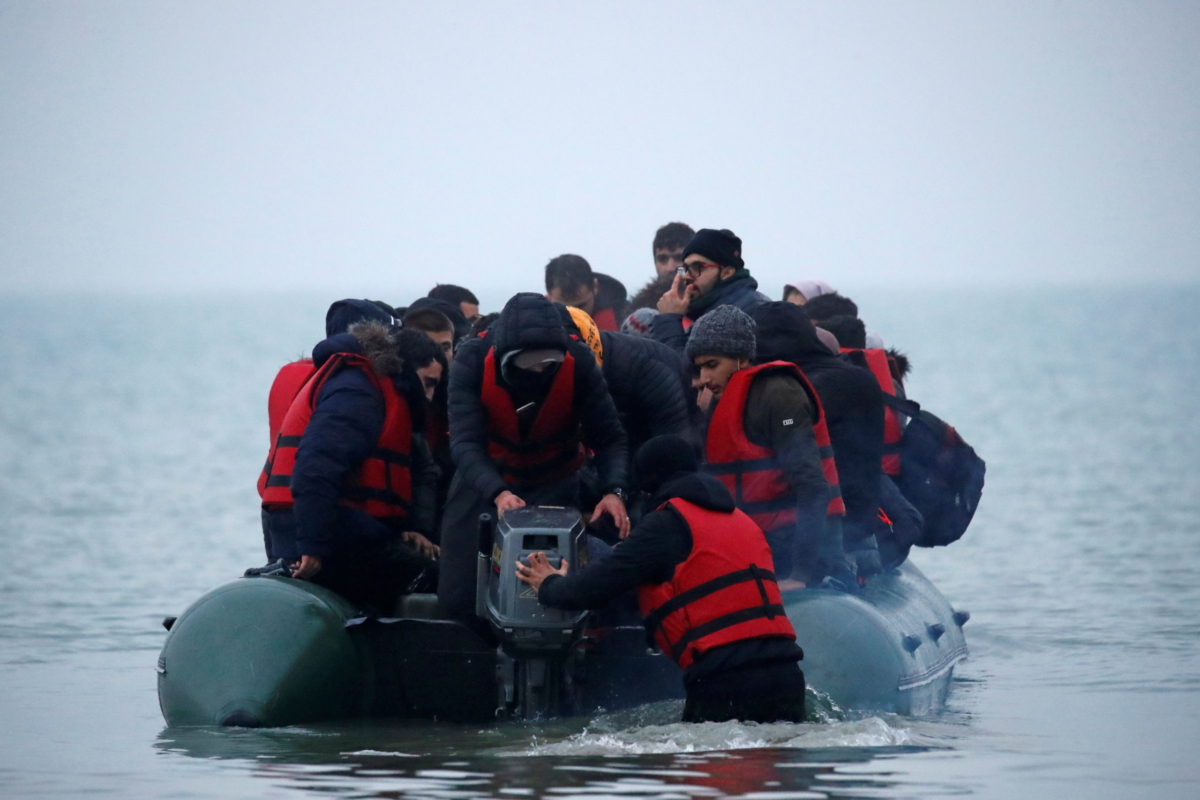 A group of more than 40 migrants get on an inflatable dinghy as they leave the coast of northern France to cross the English Channel near Wimereux on Nov. 24, 2021. Photo: Gonzalo Fuentes/Reuters

[Episcopal News Service] The Rt. Rev. Mark Edington, bishop of the Convocation of Episcopal Churches in Europe, is urging French authorities to immediately change some of their policies on the treatment of refugees and migrants in the country after 27 migrants died trying to cross the English Channel on Nov. 24. The deaths shone a spotlight on inhumane conditions for migrants in France, Edington said, arguing that if the French government will not provide basic humanitarian assistance to migrants, churches and other charitable groups must be allowed to do so.

In an open letter issued Nov. 27, Edington said the deaths of the migrants, who drowned when their small boat capsized during a journey from Calais in northern France to England, were “an eminently avoidable tragedy.” One of the reasons migrants are trying to cross the channel, he said, is the hostility of French authorities to their presence in the country, which is compounded by restrictions on the care that churches and charities may provide to migrants. Edington called for an immediate end to those policies while national leaders and the European Union sort out larger issues of migration.

“Our communities stand ready to act in any way consistent with our beliefs and commitments if called upon for assistance by the civil authorities. But while the arguments and posturing continue, we insist that basic humanitarian assistance be made available immediately,” Edington wrote.

The English Channel disaster is the latest episode in a migration crisis that has unfolded over the past decade. From 2011 through mid-2021, 9.2 million people have applied for asylum in Europe (not including Turkey), according to the United Nations. Most come from the Middle East – especially Syria, Afghanistan and Iraq – and African countries beleaguered by war, persecution, famine, economic instability and other humanitarian crises. Many have endured perilous journeys by sea to reach Europe, and many of those die trying – including at least 1,146 in the first half of 2021.

The Paris-based convocation, which includes congregations in seven countries, has made assisting refugees and migrants a central mission in Western Europe. It runs the Joel Nafuma Refugee Center, a day shelter for refugees in Rome, Italy, and parishes have undertaken individual and collective efforts to feed, shelter, resettle and integrate refugees. In recent years, parishes in France and Belgium had focused some of their efforts on the Calais area, where thousands of migrants have ended up in the hopes of reaching the United Kingdom. Episcopalians had been delivering food, medical supplies and other essential goods to the “Jungle,” a massive makeshift refugee camp in Calais that housed about 6,000 people before French authorities dismantled it in 2016. 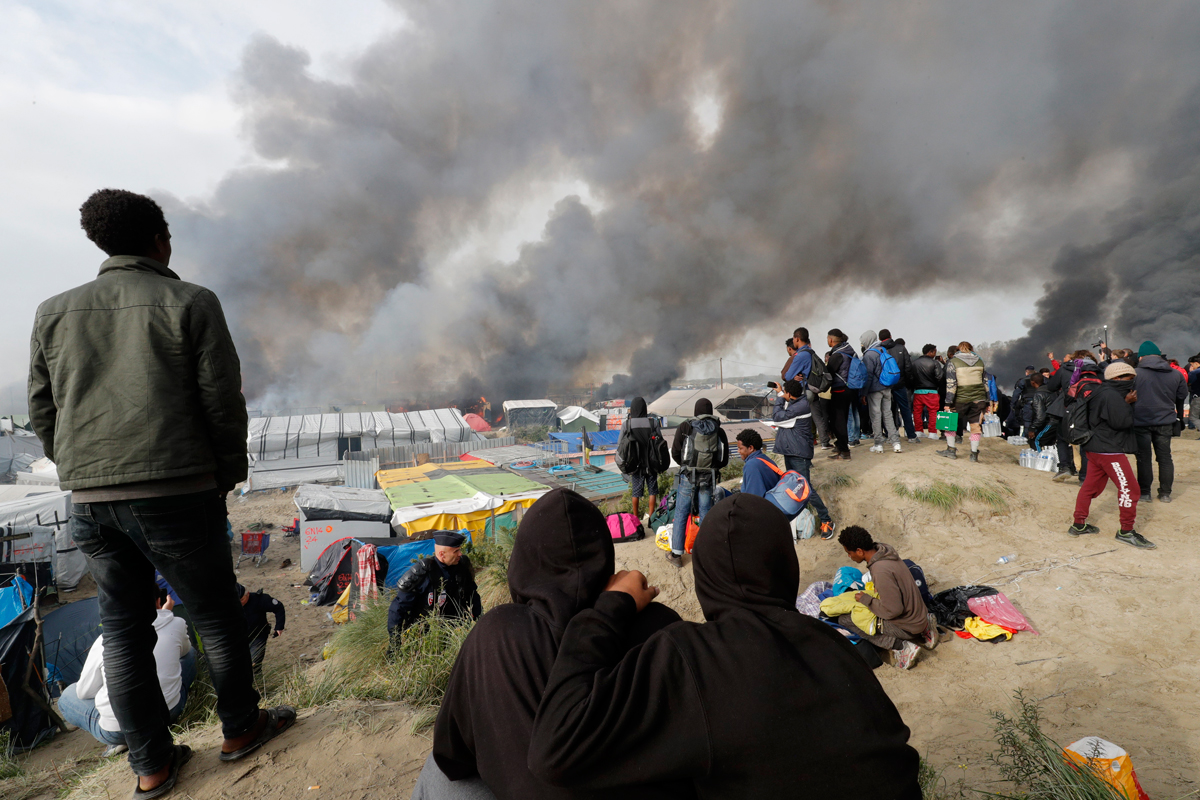 Migrants look at burning makeshift shelters and tents in the “Jungle” on the third day of their evacuation and transfer to reception centers in France, as part of the dismantlement of the camp in Calais, France, on Oct. 26, 2016. Photo: Philippe Wojazer/Reuters

Since then, Edington said, French authorities’ policies of deterrence have made migrants’ living conditions even worse – and made it much harder to help them. As of October, between 2,000 and 3,000 were living in forests, abandoned buildings and other dangerous conditions in Calais, Dunkirk and the surrounding area, according to Human Rights Watch. Police regularly evict migrants from the land they are staying on, forcing them to move along and often destroying their tents and other supplies. Most Calais encampments experienced this every 48 hours in 2020 and 2021, HRW reported.

Local authorities have severely restricted the ability of churches and charities to assist migrants by enacting laws that ban the distribution of food and water, erecting fences around encampments, and aggressively policing and intimidating aid groups, according to HRW. As of December 2019, authorities have arrested or charged 33 people in France because of their efforts to provide humanitarian aid to migrants, according to the migration research group ReSOMA. ReSOMA identified 171 such people across the European Union, including priests. 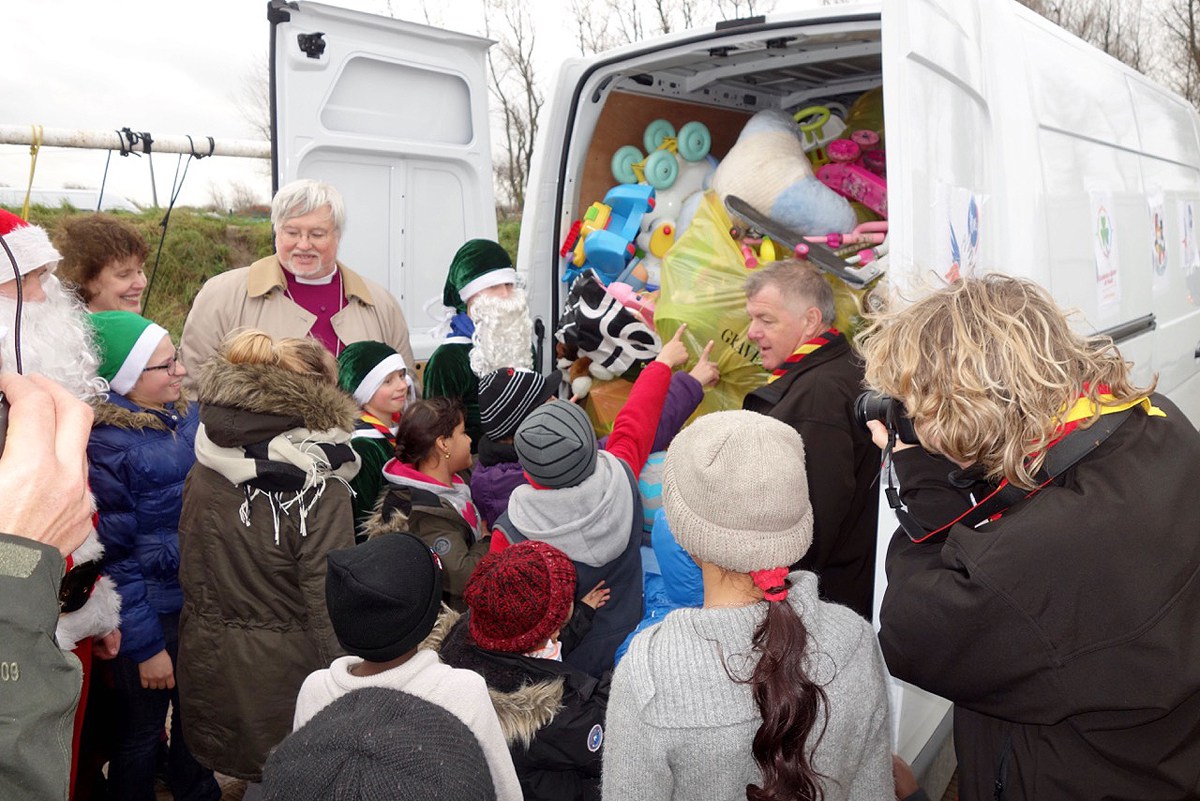 Thomas Huddleston, one of the convocation’s two “welcoming officers” for migrants, told Episcopal News Service he was not aware of any Episcopalians who had been charged or threatened, but he said the legal situation has limited their ability to provide aid in the area. Though the American Cathedral in Paris and the convocation parishes in Belgium continue to provide direct assistance to migrants in their cities, they no longer distribute supplies in the Calais area.

In his open letter, Edington said the French policies are cruel and unacceptable.

“It is difficult to comprehend governments standing in the way of charitable agencies seeking only to provide for the basic humanitarian needs of those who are suffering, exposed, and starving,” Edington wrote.

“As both citizens and Christians, we are bound to call on all governments to take immediate steps toward permitting both faith-based and secular charitable agencies seeking to provide humanitarian assistance to have access to the places vulnerable populations gather, and to offer what support they can without qualification or need for accreditation. A way must be found to place the basic human needs of the suffering first in the calculus of interests—at least among governments that claim to be based on an irreducible respect for the basic rights of each human being.”

The inhospitable conditions and policies for migrants in France are the primary reasons they end up in Calais in the first place, Edington and Huddleston said; they gather there in the hope of reaching the United Kingdom, believing they might receive better treatment there. The deaths of the 27 migrants in the English Channel might have been prevented if their living conditions were better in France, Edington told ENS.

At the very least, the French government needs to “not act in such ways as to make their suffering all the worse and bring them to decide that the desperate gamble of a 34-kilometer journey in a tiny raft across water that would cause death by hypothermia within five minutes is better than staying in France,” he said. 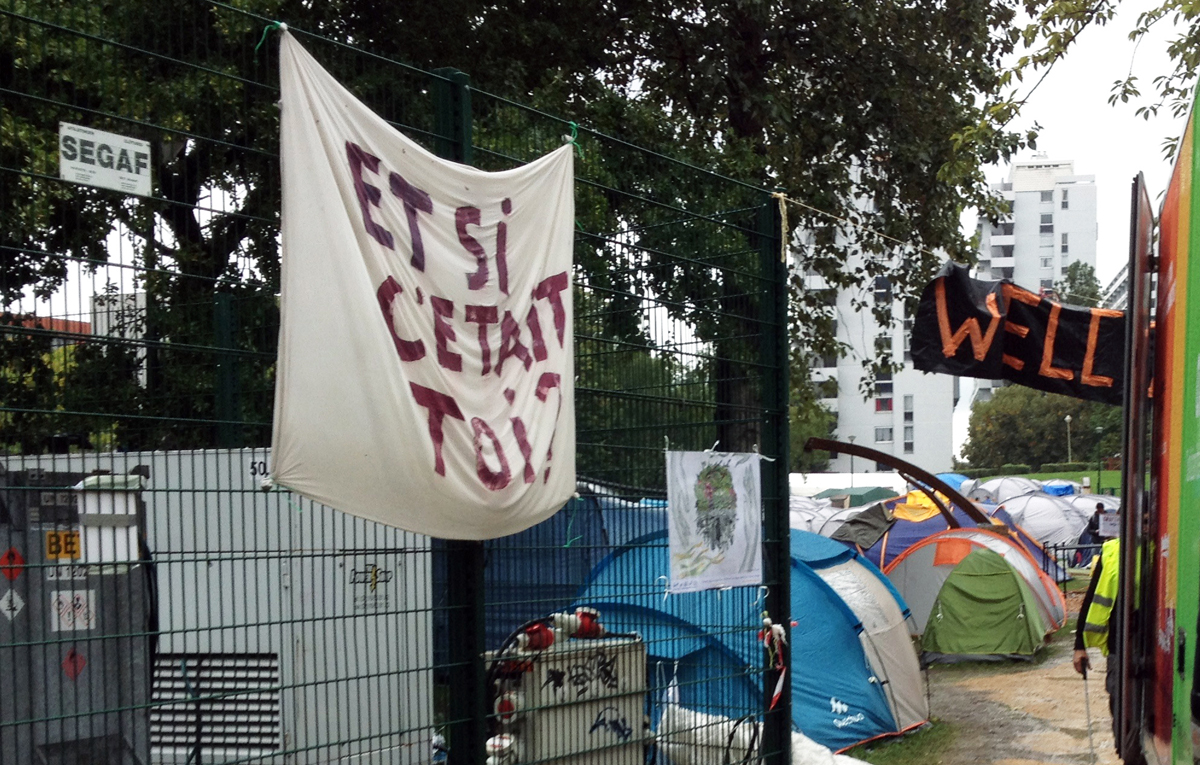 A sign hanging on the fence outside a refugee camp in Brussels, Belgium, in 2015 asks the question “What if it were you?” Photo: Sunny Hallanan

“The majority of refugees felt that England would be a better place to settle,” said the Rev. Sunny Hallanan, rector of All Saints’ Episcopal Church in Waterloo, Belgium. She is also the vicar of the St. Esprit mission in Mons, Belgium, near the French-Belgian border, which serves primarily Burundian refugees and asylum-seekers. She and her parishioners have been helping refugees and asylum-seekers in Belgium, where there are fewer restrictions on humanitarian aid, hoping that they might stay there rather than trying to get to Calais and England.

“We tried to convince refugees to stay here when possible,” she told ENS. “Unfortunately – perhaps because they speak English, not French or Dutch – there are still so many who continue to risk their lives to try to go to England.” 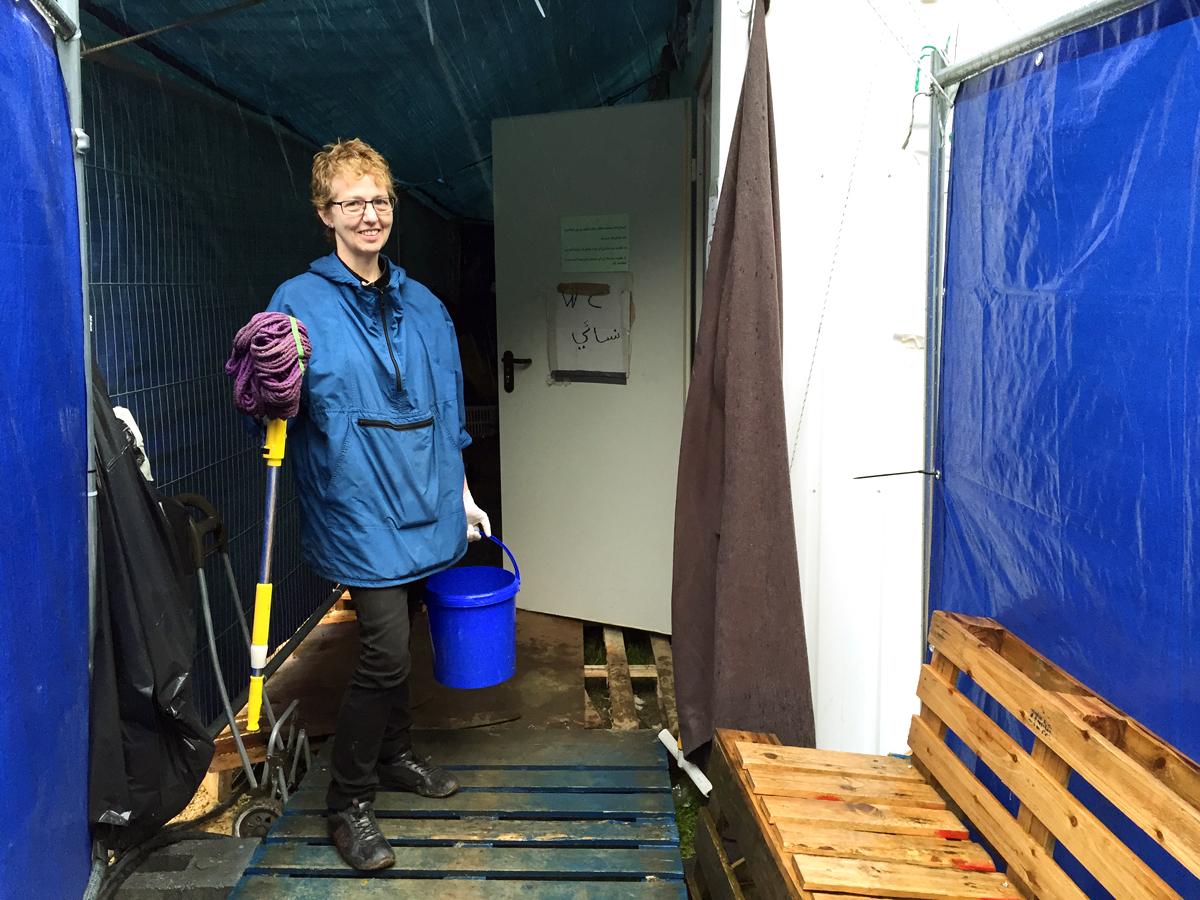 Conflicts among European nations and the U.K. over how to handle the migration crisis in Europe have worsened the situation, Edington and Huddleston said. While governments blame each other and refuse to take responsibility for people within their borders, suffering and death continue.

“The British and French governments are just pointing at each other, arguing that each is the one responsible for rescuing people at sea, for trying to offer some type of safe house and legal pathways,” Huddleston told ENS. “That has just been exacerbated by Brexit and COVID. So what you see generally in Europe is governments on both sides of borders reneging on their international responsibilities.”

“France argues that it is only a waypoint for those seeking asylum in the United Kingdom. The United Kingdom argues that France ought to be doing more to intercept these refugees before their desperation leads them to take to sea. While these interminable arguments provide grist for the media, human lives are lost as though they meant nothing,” Edington wrote in his open letter. “We do not presume to advise the governments of our nations on how to share responsibility for the plight of those fleeing war, violence, despair, and corruption. We are clear, however, that they hold this responsibility—for the same reason that we all hold a responsibility to the least, the last, and the lost among us.”