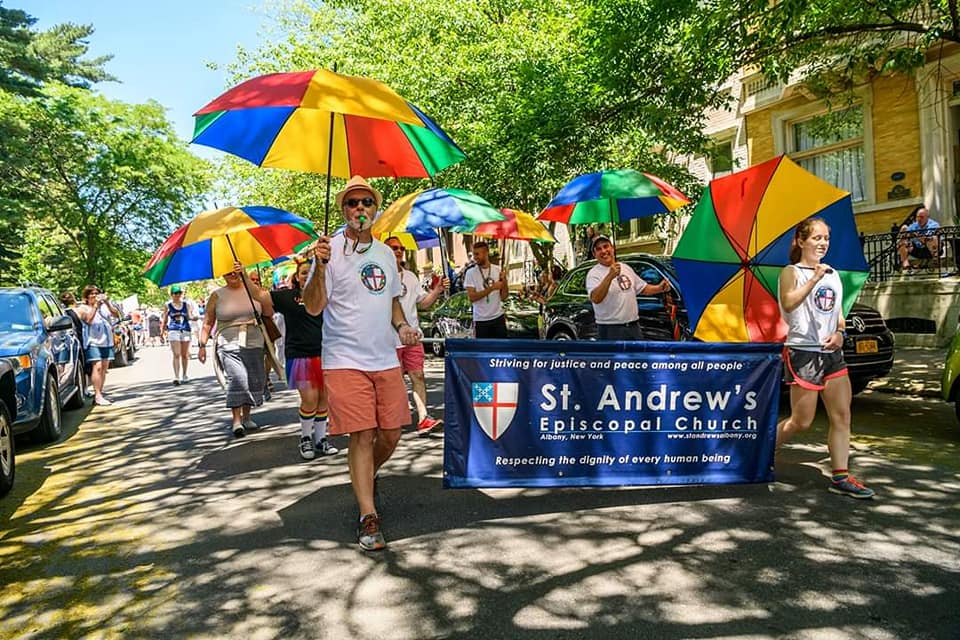 [Episcopal News Service] Although there is now a path to marriage for same-sex couples in the Diocese of Albany, some members of the diocese say theological differences, distrust and a sense of disconnect from the larger Episcopal Church linger, and that the diocese still has a long way to go before LGBTQ+ people are fully included.

The diocese’s standing committee announced on Nov. 1 that it would comply with churchwide marriage canons, ending its distinction as the only remaining U.S. diocese to ban same-sex marriage outright. In the short term, the standing committee brought the diocese into compliance with Resolution B012, the 2018 General Convention compromise measure that allows same-sex couples to marry where it is legal, regardless of the diocese’s or the bishop’s official position. B012 contains a provision for another bishop to provide oversight for same-sex marriages if the diocesan bishop opposes them.

Still, the diocese’s canon forbidding same-sex marriage and a canon requiring priests to be either in a heterosexual marriage or celibate remain on the books for now.

“The standing committee has not opened the door” to marriage equality, said Louis Bannister, a member of the Cathedral of All Saints in Albany who serves as a lay leader on the cathedral’s chapter (similar to a vestry). “They’ve unlocked the door, but they’ve left it closed.”

The diocese had been scheduled to vote on whether to change the marriage and ordination canons at its convention in October. However, delegates voted 126 to 116 for a procedural amendment that said no canonical changes could be made during an online meeting. Four new standing committee members were elected at the meeting.

In its Nov. 1 announcement, the standing committee – which has served as the diocese’s ecclesiastical authority since the resignation of former Bishop William Love – said that “as a body” it is theologically opposed to same-sex marriage, as Love was. Love was the only bishop who refused to implement B012, and a disciplinary panel determined in October 2020 that his refusal violated church canon law and his ordination vows. Love resigned in February of this year rather than face further disciplinary action, and he joined the Anglican Church in North America.

In order to comply with B012 until the election of the next diocesan bishop, the committee directed clergy who plan to celebrate same-sex marriages to consult with Assisting Bishop Michael Smith and work out an arrangement. In August, the committee had called Smith to serve the diocese until Love’s successor is elected.

Smith, previously bishop of the Diocese of North Dakota, was one of eight bishops who refused to allow same-sex couples to marry using trial rites approved in 2015 by the 78th General Convention. In 2018, he agreed to implement B012 in North Dakota by designating pastoral oversight to another bishop. Smith retired as diocesan bishop there in May 2019.

The Albany diocese started its profile and search process for the next diocesan bishop in June, and it is expected to take about 18 months.

It is unclear what prompted the standing committee to issue its Nov. 1 announcement. Smith, the standing committee, and diocesan officers have not answered questions from Episcopal News Service. Members of the diocese whom ENS spoke to said they aren’t clear on how the alternative pastoral oversight process would work – whether Smith would provide the oversight himself or arrange for a bishop outside the diocese to do so, or whether any oversight is necessary, since bishops typically do not intervene in marriages unless either spouse has previously been divorced. The Rev. Glen Michaels, priest-in-charge of five churches known as the Adirondack Mission, said he wrote to Smith asking what the process would be and had not received a response.

Some members of the diocese are frustrated that the standing committee didn’t go further toward full inclusion, while others hope the announcement is a first step toward reconciliation.

“The statement is less than we would have wanted, but nevertheless shows change, I think in the right direction,” said the Rev. Jane Brady-Close, interim rector of St. Andrew’s Episcopal Church in Albany, which is open about being an LGBTQ-welcoming congregation. She said she was “blindsided” by the announcement. “A lot of these issues that are so significant that they take generations of people working on them. … Moses never entered the promised land.”

“There’s some frustration and there are still some questions about the process,” said Barbara Wisnom, senior warden at St. Andrew’s, which has had pastoral oversight from bishops outside the diocese since 2012, with the understanding that it will still abide by diocesan canons. “Are they trying to make it harder? Do we have to have a bishop come in from outside? … We’re kind of in limbo.”

“There is great distrust for the standing committee. There’s just a lot of distrust, period,” Bannister said.

The next time the diocese will be able to consider the resolutions on marriage and ordination is at its next in-person diocesan convention, scheduled for June. Since the resolutions were tabled and the standing committee’s announcement did not pertain to the ban on ordaining non-celibate gay people, it is still in effect. Churchwide canons prohibit discrimination in access to the discernment process based on sex, marital or family status, sexual orientation and gender identity, among other categories.

“I’m disappointed that the diocese has not taken up the issue of ordination,” Brady-Close said. “How big is your vision of God? And is God not entitled to call whomever God chooses to call? And who are we to interfere with that?”

Wisnom says she and others who have been involved in the long struggle for marriage equality in the diocese will continue to push for equality in ordination. She is an organizer of the informal group Concerned Episcopalians, formerly Albany Via Media, which has advocated for compromise solutions to LGBTQ+ issues since 2003. She said the group has over 20 people representing at least six congregations, and they will advocate for the resolutions at the June convention.

“We’re not protesting. We’re not carrying flags. We’re trying to play by the rules,” Wisnom said.

She and other members of the diocese said they want to see the diocese reengage with The Episcopal Church.

“I don’t want anyone to think that this is all about gay marriage,” Wisnom said. “That’s the presenting issue. The Diocese of Albany has cut themselves off from the national church. We get no information about commissions on race relations, on climate change. Our larger hope is that our next bishop is someone that the conservatives could be OK with and would start to repair relationships or reinitiate relationships with the national church because we really are isolated.”

Keith St. John, a member of the Cathedral of All Saints and of Concerned Episcopalians, said he is uneasy by language in the standing committee’s letter supporting the adoption of the Anglican Communion Covenant, a framework for managing differences within the Anglican Communion. The Episcopal Church has not taken a position on the covenant, which has been accepted by some churches and rejected by others.

“That said, I’m heartened to see the standing committee finally comport with the actions of the 79th General Convention,” said St. John, who also serves on the profile and search committee for the next diocesan bishop.

No one ENS spoke to was aware of any same-sex couples who were planning to get married in the diocese. Some gay members had already gotten married in other dioceses or in a civil ceremony – or left the diocese altogether.

“My husband and I waited 10 years for things to change and gave up in frustration,” said Roland LaScala, former senior warden at St. Andrew’s, who married his husband in June in a civil ceremony at a farm.

“Many [couples] across the diocese have stopped holding their breath and simply chose to leave the church,” St. John said. “I hope and pray that they will see their way back to the church and find renewed comfort and purpose, even in the Diocese of Albany.”

One couple from the Cathedral of All Saints got married in the Diocese of Vermont, and brought the cathedral’s processional cross and thurible for the ceremony, which a number of parishioners attended, Bannister told ENS.

“We were able to do everything except host the wedding of two of our own people,” he said.

Though gay Episcopalians who have stayed in the diocese are no longer banned from getting married in their own churches, some said it doesn’t erase the pain of exclusion.

“I grew up active in the church. I grew up believing that I was a child of God because that is what the church taught me before I knew what my sexual orientation was going to be,” Bannister said. “My outrage is because, in this diocese, I’m not a child of God; I’m part of a problem.”

When LGBTQ+ parishioners are suffering, the whole parish suffers with them, Brady-Close said – but their endurance is also a source of inspiration.

“It’s been a hardship for St. Andrew’s – for our members as a whole, not merely for our gay and lesbian members, and that we have a significant number testifies to their faith and their spiritual maturity. It would be so easy to just say, ‘I’m out of here.’ … Their tenacity and their humility is just a great inspiration for others.”

Correction: In an earlier version of this story, Barbara Wisnom’s name was misspelled.