[Religion News Service] More than three years after Beth Allison Barr moved to the small Texas church where her husband is pastor, the Baylor University historian was alerted to a single word in the church’s belief statement, posted on its website: “Godself” — an attempt, apparently inserted with the blessing of one of Barr’s husband’s predecessors, to portray the Almighty as beyond gender, neither a “himself” nor a “herself.”

Barr, author of the recent bestseller “The Making of Biblical Womanhood,” was only made aware of the pronoun’s appearance after the Council on Biblical Manhood and Womanhood, a conservative group, sent a fundraising email teeing off on “Godself,” criticizing Barr for denying “God’s revelation.”

(A related article written by the group’s executive director linked to an earlier pair of columns by Religion News Service columnist Mark Silk asserting that God’s pronoun should be “they.”)

The council’s gambit backfired: The church received more than $26,000 in donations in support of Barr, if not the pronoun, which the church has since changed to “Himself.” And the email only fueled a somewhat dormant, if sometimes divisive, debate on the matter of God’s gender.

In some seminaries and university religion departments, “Godself,” though somewhat awkward, has become second nature; professors are even known to dock points from papers that use “he” for God. 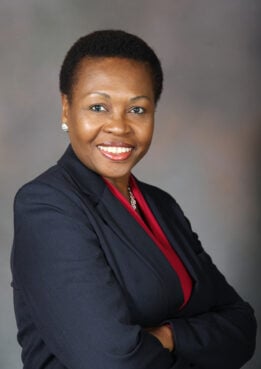 At Spelman College in Atlanta, the department of philosophy and religious studies has implemented an inclusive language policy since 2007 that, among other things, instructs students to avoid gendered language when referring to nongendered deities (think: Shiva). The Rev. Rosetta Ross, professor of religious studies at Spelman and original author of the policy, said inclusive language is part of her grading rubric for class assignments.

“My rationale is that using inclusive language expands the possibility of thinking about women’s roles and status beyond that of subordinate to men,” said Ross.

The 2021 language guide of the Presbyterian Church (U.S.A.) recommends titles such as “Mother,” “I Am,” “Hen” and “Woman.” In 2018, the Episcopal Church’s 79th General Convention, while stopping short of authorizing a full revision of its 1979 Book of Common Prayer, encouraged liturgical experimentation, including with “inclusive and expansive language and imagery.” And more casually across mainline Protestantism, it’s not uncommon to hear God, and especially the Holy Spirit, referred to as “she.”

In Catholic and conservative evangelical churches, such workarounds from traditional language are rare, however, demonstrating how unsettled, and often unsettling, ideas about God’s gender can be in practice.

Mark Miller, a composer, professor of church music at Drew Theological School in Madison, New Jersey, and lecturer at Yale’s Institute of Sacred Music, heard only masculine pronouns for God growing up in the United Methodist Church. But he said that many in the denomination have grown more comfortable with calling God something other than “he.” 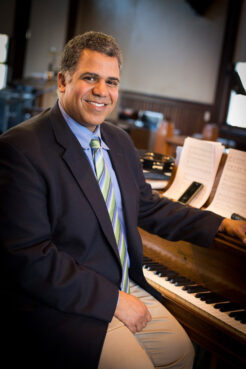 Miller is part of this shift. His 2005 rendition of “The Lord’s Prayer,” which begins with “Our God in heaven” instead of “Our Father in heaven” and trades “Kingdom” language for “Kin-dom” to describe God’s community, is one of numerous songs he’s composed, and that have been sung across the country, that show God in relational rather than patriarchal terms. Even so, Miller said he’s been called out for using the word “Lord,” a word some see as gendered, in reference to “The Lord’s Prayer.”

The language we use when singing about God matters, Miller said, because “it forms us at the earliest ages, in terms of how we understand the higher power to inhabit creation.” How we learn about God, Miller said, also shapes how we treat one another.

Such language, he said, isn’t always appropriate. “I played for a funeral of a woman 108 years old on Saturday,” said Miller. “She and the family had chosen hymns without necessarily inclusive language, and I wasn’t going to change their songs, which might have been very close to their heart.”

The Rev. Wil Gafney, a Hebrew scholar and Episcopal priest at Brite Divinity School in Fort Worth, Texas, has published a book of readings for holidays and Sunday services dedicated to inclusive thinking. “A Women’s Lectionary for the Whole Church” avoids the word “LORD,” often inscribed in uppercase letters to signify God’s name YHWH, because Gafney sees ”Lord” as a “common male human slaveholding title.”

Her lectionaries also use mainly female and, infrequently, nonbinary pronouns to refer to God in the Psalms, and consistently uses female pronouns for the Holy Spirit. 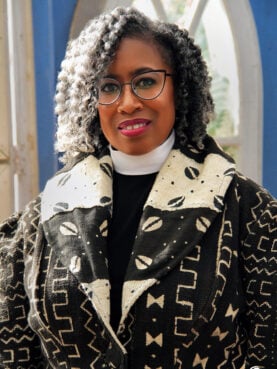 ”The only reproductive organs ascribed to God are feminine,” said Gafney, pointing to descriptions of God having a womb or giving birth. “God is larger than the grammatical categories, even in the Biblical text. So what I’m doing is leaning deeply in the variety and language in the Scripture, centering the feminine language intentionally, and potentially and secondary, the nonbinary language.”

Gafney says the lectionary, which includes entirely new, female-centered readings, is already being used across the major mainline denominations and by Catholic groups in study and devotion. It’s dedicated to “those who have searched for themselves in the Scriptures and did not find themselves in the masculine pronouns.”

Even those who insist on Scripture’s presentation of God as “he,” “Lord” or “Father” see room for other views.

In his classroom at Grove City College, a conservative Christian school in Grove City, Pennsylvania, biblical and religious studies professor Carl Trueman doesn’t have guidelines about how his students should speak or write about God, though personally, he has strong convictions on the matter.

“I typically declare my classes to be free speech zones,” said Trueman. “I could envisage a situation where a student submitted an essay to me using pronouns for God which I do not approve of myself, but as long as they gave me a good argument, I would be willing to give them a hearing.”

Trueman, who belongs to the Orthodox Presbyterian Church, is open to reflecting on any imagery for God in the Bible, including feminine language. The problem, he believes, comes when Christians impose human conceptions of gender, motherhood or fatherhood onto God. Instead, he believes God’s fatherhood is archetype, of which human fatherhood is an imperfect reflection. “If you see God as the archetype, then the language used in the Bible about fatherhood and the language of ‘he’ carries huge authority,” he said.

Seeing God as a set of human male or female qualities and allowing them to determine our language risks making God a function of contemporary gender struggles, Trueman said.

Tim O’Malley, academic director of the University of Notre Dame’s Center for Liturgy, noted that Catholic liturgies don’t often rely on pronouns for God — though they are masculine, when present — and they frequently implement the trinitarian language of Father, Son and Holy Spirit.

In 2008, the Catholic Church decreed that baptisms that named the Trinity in nongendered terms such as the Creator, Redeemer and Sanctifier were invalid. O’Malley agrees that attempts at ungendering the triune God confuse the roles of each person. “The Father and the Son and the Holy Spirit are each involved in creation, redemption and sanctification,” he said.

Catholics, he added, have devotional relationships with Mary, Jesus’ mother, and other female saints, and noted the church’s rich tradition of mysticism is filled with female God imagery. This heritage, he said, can be a great resource for private prayer, when Catholics can speak to God however they prefer.

“I do think it’s important that we retrieve the mystical tradition, and that Trinitarian language doesn’t become so calcified that it doesn’t allow for a variety of ways of communing with God, as the beloved, as a mother hen,” he said.

Gafney also distinguishes between speaking about God in public worship and addressing God in personal prayer.

“When I lead a service, I am the pastor of the community. Not everyone is a womanist or feminist, and they may not be where I am about language,” said Gafney. “As pastor, I’m hosting, in some way, the community in the presence of God. So it has to be accessible for as many as possible.”

In practice, this means that Gafney often uses a blend of gendered and nongendered language in a church setting. And because inclusive God language is still widely not accepted in the Episcopal Church, she said, she asks to be called “Father Gafney.”

“We have this tradition that we use the title ‘Father’ for God and male clergy, and then call women something else,” said Gafney. “And so I told them, when you figure out how to articulate God with a variety of gender expressions, then you can talk about calling me something else.”