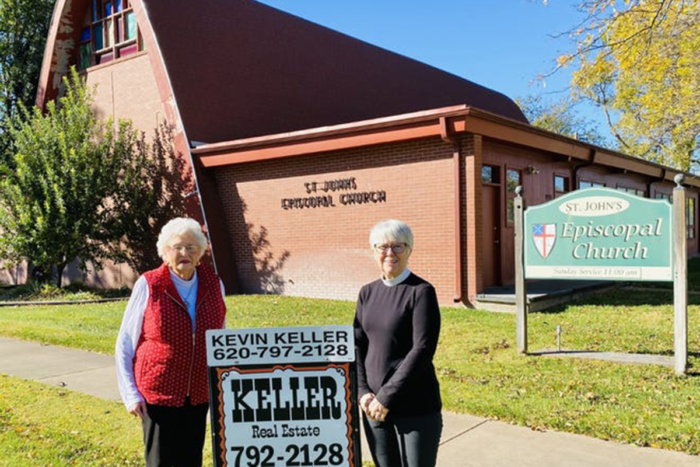 [Episcopal News Service] St. John’s Episcopal Church in Great Bend, Kansas, about two hours northwest of Wichita, has welcomed Sunday worshippers into its current building for 70 years, but it has been a long time since they came close to filling the pews. The Rev. Teresa Lahar, St. John’s vicar, estimated turnout was as high as 35 two decades ago. It has since dwindled to about a dozen on a good Sunday.

“We’re kind of an aging congregation,” Lahar told Episcopal News Service. In the past couple years, three members have died and another moved into a nursing home. Plate and pledge revenue from the remaining active members, she said, isn’t keeping pace with expenses – about $1,000 a month – including building maintenance, utility bills and Lahar’s part-time pay. The congregation’s reserves would only last so long making up the difference.

In July, the congregation agreed to sell its church building. Once it’s sold, Sunday services will move to the First Congregational United Church of Christ, where St. John’s will rent the chapel and meeting space. By saving on building costs, the Episcopal congregation is hoping to secure its future while continuing to support ministries that serve its community, Lahar said.

“Financially, we have some money, but not enough to keep going,” she said. “It’s been a very hard decision, but the reality is, we can’t afford to stay there.”

The congregation listed the red brick church built in 1950 in August at $170,000. After initially receiving minimal interest, the price was lowered to $150,000 in October, and the congregation now has at least three prospective buyers, though no confirmed sale yet. The building is nearly 5,000 square feet and includes office space, two bathrooms, a kitchen and a meeting room.

The building could be converted to a new use, such as offices or a home. If the buyer is another congregation, St. John’s would include its furniture and furnishings in the sale, Lahar said.

Lahar has attended St. John’s off and on since 1996 and regularly for the past 16 years. For most of that time, the congregation had been served by supply priests. A few years ago, a previous priest encouraged Lahar to consider ordination, to serve St. John’s as a bi-vocational priest.

“She kept telling me I needed to be doing this. She thought I was suited for it,” Lahar said. At first, she was skeptical, but then, “God just spoke to me.” In 2016, she enrolled in the Bishop Kemper School for Ministry in Topeka. She was ordained as a priest in December 2019 and began serving at St. John’s shortly after retiring from the hair salon she had owned.

She, like the members of her congregation, feel an attachment to the old building, but they are ready to start the next chapter in the life of their church.

“It’s hard on all of us. None of us want to see the church close,” she said. They spent two years discussing their options for the building, including renting space at St. John’s to community groups, before deciding to sell.

Lahar visited other churches in Great Bend, a city of about 15,000 people, in search of a suitable chapel for St. John’s to rent. First Congregational was welcoming and its rent reasonable, she said, and St. John’s would be able to use other rooms at the church for Bible studies and coffee hour.

For now, St. John’s will continue worshipping in its old building, until it is sold. The proceeds will be held by the Diocese of Western Kansas and available to St. John’s in the future if the congregation considers a return to a more permanent building.

The congregation may be small, but its active members are committed to volunteering in the community, Lahar said. They recently began helping a local organization, Central Kansas Dream Center, organize free meals for low-income families and homeless residents on Sundays, to supplement the usual weekday meals. St. John’s also supports an organization called the Global Orphan Project, and in recent years, church members have filled backpacks with food for children attending a local elementary school.

“The reality is, we need to help in the community,” Lahar said. “And we can’t do that if we’re just spending money on trying to keep the building for a few people on Sunday.”