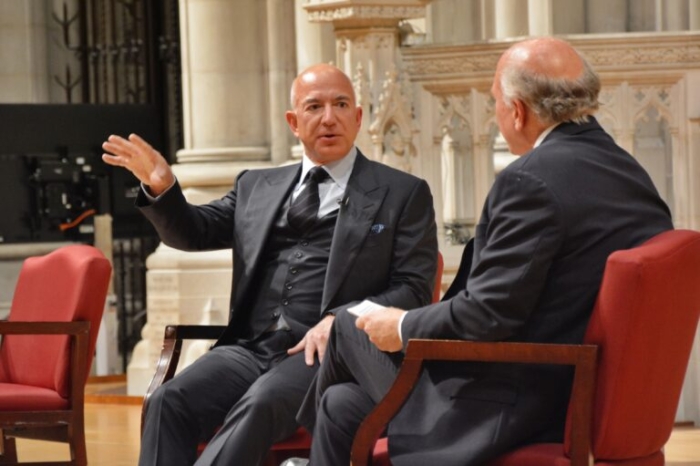 [Religion News Service — Washington, D.C.] Jeff Bezos was a surprise guest at a Washington National Cathedral forum on “Our Future in Space” Wednesday evening (Nov. 10), giving an interviewer the chance to grill the Amazon founder and space flight entrepreneur about extraterrestrial colonies, alien life and his own wealth.

Cathedral dean the Very Rev. Randolph Marshall Hollerith opened the event, which also featured the NASA administrator and the director of national intelligence, by noting that one of the building’s stained-glass windows contains a moon rock collected during the Apollo 11 mission.

“We must be careful not to have a view of God that is too small,” Hollerith said. “I believe the great mystery that lies at the heart of existence — the God who is, we say, the very ground of our being — that God beckons us into the great mysteries of the universe, where we can discover, I believe, divine footprints wherever we go.”

A half-hour later, Adi Ignatius, editor-in-chief of Harvard Business Review, questioned Bezos, who was introduced as an “astronaut,” before the sprawling crowd about his trip to space this summer aboard a rocket built by Blue Origin, the private spaceflight company Bezos founded in 2000.

Bezos, 57, spoke of the “overview effect,” a profound and sometimes spiritual feeling experienced by many astronauts as they gaze upon the Earth from above.

“The magnitude of that experience was so much bigger than I could have ever anticipated,” he said. “It really is such a change in perspective that shows you, in a very powerful and emotional way, just how fragile this Earth is.”

Bezos argued the effect has the potential to make Blue Origin customers who purchase (the likely very expensive) tickets on the four-seat rockets “ambassadors for Earth.”

The tech titan’s 11-minute trip above the clouds was one of three inaugural private spaceflights launched this year by a trio of wealthy business owners: Bezos, Virgin Galactic founder Richard Branson and Space X president Elon Musk. Musk and Bezos — the wealthiest and second wealthiest man on the planet, respectively — compete for government contracts to build vessels that can travel to the moon and beyond.

Ignatius pressed Bezos, who also owns The Washington Post, as to whether the money spent on a privately funded space race could be better utilized to address more earthbound concerns.

“I’m actually spending even more money on the Bezos Earth Fund than I’m spending on space,” Bezos said, referring to his $10 billion fund designed to fight climate change. Even so, Bezos insisted humanity should “look to the future,” saying, “if we want to keep growing as a civilization, using more energy as a civilization, most of that, in the future, needs to be done off planet.”

Bezos went on to detail an “off-planet” vision that involves moving “heavy industries” and solar energy farms into space. He also promoted the idea of building massive space colonies capable of housing roughly a million people each, with the residents living in artificial gravity.

However, he was dismissive of calls to make Mars habitable for humans — a “terraforming” dream long championed by his rival Musk — describing any such effort as “very, very challenging.”

Challenging or not, NASA Administrator Bill Nelson, a former U.S. senator and former space shuttle crew member, expressed his excitement about the prospect of visiting the red planet. Nelson participated in the event via a pre-taped video due to an unexpected scheduling conflict: a delayed launch of four astronauts from Cape Canaveral, Florida, to the International Space Station aboard a SpaceX rocket. (The launch, which took off right as the event concluded, was successful.)

“We’re going to the moon to learn what we need to do as humans to survive when we go millions and millions of miles out to the planet Mars,” Nelson said in reference to NASA’s new Artemis program, which aspires to put the first woman and first person of color on the moon.

Nelson, who flew on the space shuttle Columbia in 1986, also spoke of the impact of the overview effect during his time in orbit.

Director of National Intelligence Avril Haines, whose office issued a preliminary assessment in June on “Unidentified Aerial Phenomena” that did not rule out the existence of aliens, was asked to elaborate.

“The main issues that Congress and others have been concerned about are basically safety of flight concerns and counterintelligence issues,” she said. “But of course, there’s always the question of: Is there something else that we simply do not understand that might come (from) extraterrestrials?”

When it comes to national security concerns, however, both Haines and Nelson appeared more wary of other countries putting weapons in orbit — particularly those designed to disrupt or destroy satellites — than visitors from another planet.

“The threat is real,” Haines said. “Both China and Russia are increasingly building space into their military capabilities.”

Nelson said that Russia has continued to cooperate with the U.S. in space exploration but that China has taken a different posture.

“We’re not having that success with the Chinese government,” he said. “They’ve been secretive, nontransparent. They have not been willing to cooperate. And yes, we can have some trouble in space vis-a-vis the Chinese.”

The profound social and theological implications of finding alien life — be it on Earth or elsewhere — was the subject of the event’s final panel, in which Hollerith spoke with Harvard astronomer Avi Loeb and professor David Wilkinson of Durham University in England.

Wilkinson, who is also a Methodist minister, grappled with whether finding alien life more advanced than humans would challenge the notion common in many religious traditions that humanity has a privileged position with God.

Wilkinson argued, “You are special not because you’re the center of everything, but because you are loved — the belief that God loves us.”

“The God that I see in Jesus Christ, I think, is a God of love and grace, and that God would be loving not just to human beings, but loving to the whole of creation — the planet itself,” he said. “If there is (alien) life, intelligent or not, that would be the basis of a relationship of love.”

Hollerith said the impact of meeting aliens — like the overview effect — would “humble us as to our place within the cosmos.”

That humbling experience, Loeb argued, could change humanity for the better.

“Suppose we find the smarter kid on our block: Then the small differences between us are meaningless,” he said. “Showing off in space is an oxymoron. My hope is that once we discover intelligence out there, we will treat each other with more respect as equal members of the human species.”