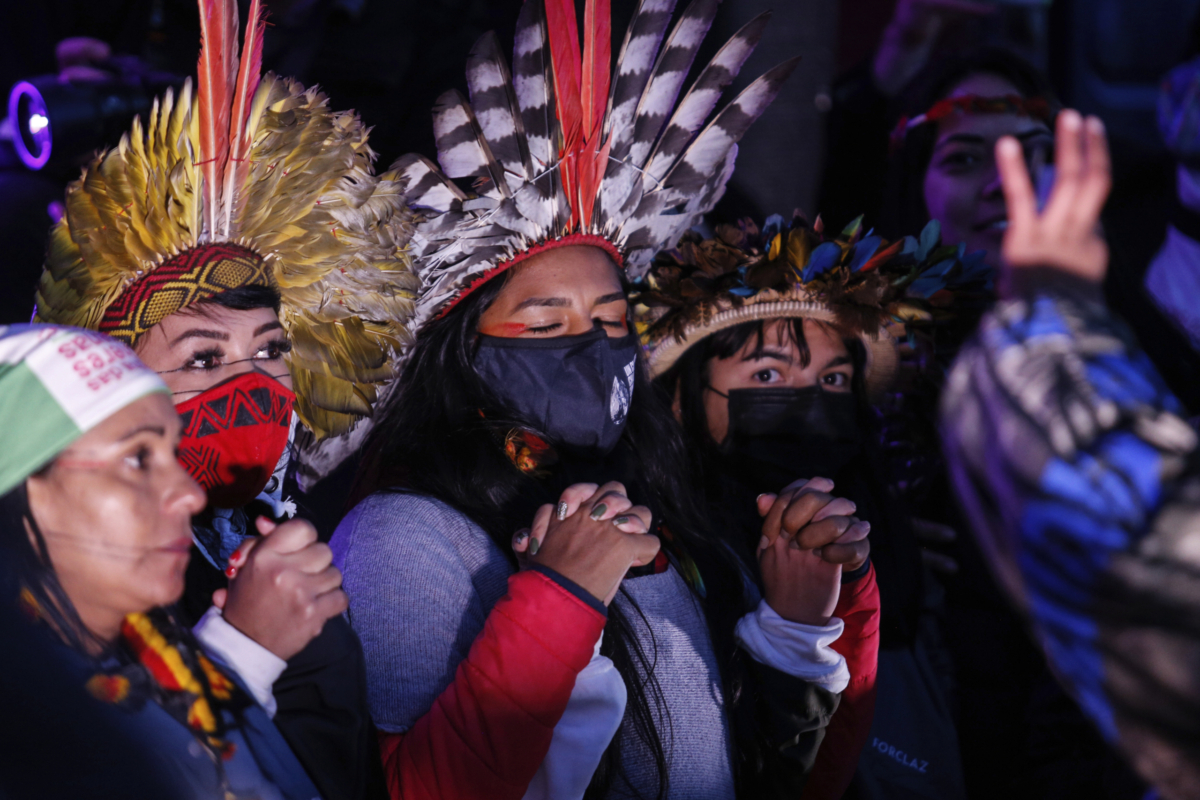 Indigenous environmental protesters from South America dance during a demonstration calling on politicians to take action during the seventh day of the COP26 U.N. Climate Change Conference in Glasgow, Scotland, on Nov. 6, 2021. Photo: Dominika Zarzycka/Sipa via AP Images

The liturgy, featuring leaders from across The Episcopal Church, highlighted the past, present and future role of Indigenous peoples in caring for the Earth, a theme that is increasingly echoed by Anglicans and other participants at the conference, which is being held in Glasgow, Scotland, and online through Nov. 12.

The virtual service invited participants “to walk a path from grieving and confession to repentance and awakening to proclamation and reconciliation, and then to praise and action,” said California Bishop Marc Andrus, who leads the Episcopal delegation alongside Lynnaia Main, The Episcopal Church’s representative to the U.N.

Andrus and other speakers paid tribute to the Indigenous tribes who have inhabited and tended the lands on which the speakers live, and lamented the colonization that destroyed or disrupted their ways of life. In his sermon, Curry drew a connection between the degradation of Indigenous peoples and the degradation of the environment.

“The rise of mercantile capitalism in the West, and the conquest of lands … is directly linked to the enslavement of African folk and the forced removal and genocide of Indigenous folk. It’s not an accident that exploitation of the creation leads to not only exploitation of the Earth, but the exploitation of people,” Curry said.

Curry also relayed concerns about “green colonialism” an idea expressed at COP26 by a Lutheran pastor who serves the Sámi Indigenous people in Finland. Green colonialism, Curry summarized, involves implementing climate solutions that affect Indigenous peoples’ ways of life without consulting them, like installing wind farms and other low-emission infrastructure projects on ancestral lands. Instead of focusing too much on bringing people into the future, Episcopalians should look to the past and learn from ancient Indigenous wisdom, Curry said, pointing particularly to the Gwich’in Episcopalians in Alaska who have fought against oil and gas drilling on their sacred lands for decades.

“We must cultivate a new spirituality – no, an old and ancient spirituality. It is born of the wisdom of our Indigenous brothers and sisters,” Curry said.

Andrus, Main and other staff representing Curry and the church at COP26 are joined by 24 delegates, selected from 70 people who applied for this year’s delegation. The church offered a preview of the delegation’s upcoming work in a webinar hosted Oct. 28 on Zoom.

This year’s conference focuses on the aggressive steps member nations must take to fulfill the landmark 2015 Paris Agreement, in which close to 200 countries set voluntary goals aimed at limiting global warming to less than 2 degrees Celsius above preindustrial levels, settling on 1.5-degree target. At the time, the goal was meant to mitigate the catastrophic effects of warming temperatures on the Earth’s surface, which cause melting glaciers; rising sea levels; and more frequent and extreme hurricanes, droughts, snowstorms and wildfires. Since then, climate scientists have a warned that climate change’s threat to humanity is at a “code red,” as warming is close to the 1.5 degree threshold.

Creation care is one of The Episcopal Church’s three top priorities during Curry’s primacy, in addition to racial reconciliation and evangelism. General Convention has passed numerous resolutions on the issue, whether supporting federal climate action or pledging to mitigate the church’s own impact on the environment. Through its Office of Governmental Relations and the Episcopal Public Policy Network, the church has advocated for government policies in line with General Convention stances on climate change.

Since 2016, The Episcopal Church has held U.N. observer status, which allows members of the Episcopal delegation to brief U.N. representatives on General Convention’s climate resolutions and to attend meetings in the official zone, which this year extends to online.

All are invited to a closing event hosted by the Episcopal delegation at 2 p.m. Eastern on Nov. 12 to summarize the delegation’s work.