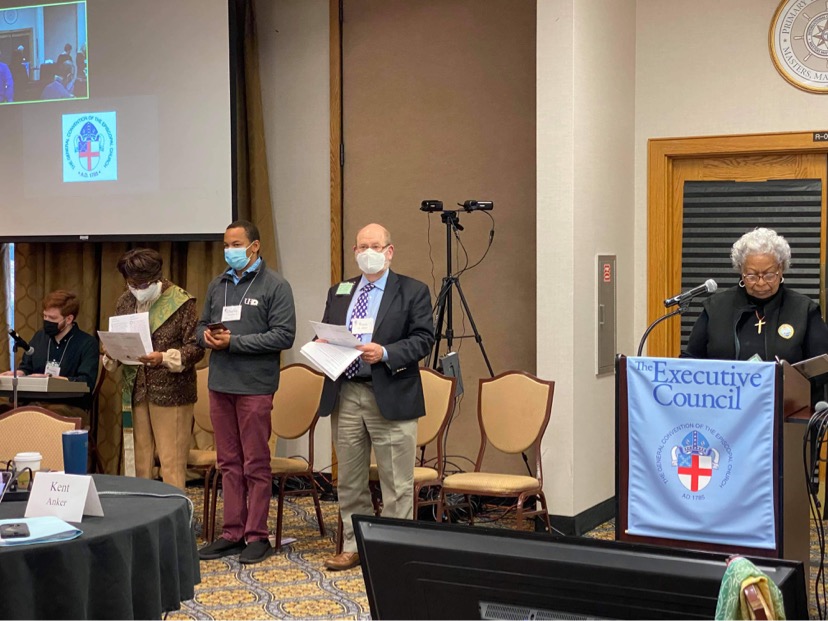 [Episcopal News Service] At its first meeting with in-person attendance since the start of the COVID-19 pandemic, The Episcopal Church Executive Council approved a 2022 churchwide budget relatively unaffected by the pandemic, staying the course while acknowledging that the coming years may bring significant changes to the church, culturally and financially.

Executive Council, which met Oct. 25-28 in Linthicum Heights, Maryland, with some members joining via Zoom, celebrated the perseverance of the church during the trials of the past year and a half, while acknowledging the disparities and disconnects exacerbated by the pandemic within the church. Dioceses in the United States have been affected differently from non-U.S. dioceses, and the finances of churchwide and parish budgets have gone in opposite directions in many cases, council members said.

For the 2019-2021 triennium, there is a projected surplus of $15.9 million. This reflects a number of factors unique to the COVID-19 pandemic, including less staff travel, the receipt of $3 million in federal Paycheck Protection Program funds, and postponement of General Convention. Deducting the expected $2.5 million cost of next year’s 80th General Convention from this surplus, the remaining $13.4 million will be put into investments and short-term reserves, Finance Committee Chair the Rev. Mally Lloyd said.

Presiding Bishop Michael Curry cautioned that calling it a “surplus” could be misleading, though it does create an “opportunity to do something both creative and helpful for the church.” If a “surplus” exists, it isn’t because the church is “flush” with cash but because it reduced expenses during the pandemic, he said.

“That may be the wrong word,” Curry said. “We tightened our belt. Actually, we lost weight, institutionally. We did everything we could to squeeze everything out of every dollar we had.”

Income from dioceses, trusts, investments and other sources has remained in line with expectations, but the full impact of the pandemic on the coming year remains uncertain. The Finance Committee recommended a 2022 budget with “no major changes” and “no surprises,” Lloyd said, which council approved. Staffing is expected to remain relatively constant with 150 members receiving 3% cost-of-living salary increases. (For comparison, the 2022 cost of living adjustment for Social Security payments is 5.9%.)

Looking to the future, the Finance Committee sought input on priorities for the 2023-2024 budget from council, asking members to discuss how it could be used to bridge the gap between churchwide programs and needs at the parish level. This discussion was brought on in part by an opinion essay in The Atlantic written by the Rev. Elizabeth Felicetti, rector of St. David’s Episcopal Church in Richmond, Virginia. Titled “My Church Doesn’t Know What to Do Anymore,” the essay conveys the exhaustion and isolation felt by many parish clergy as the pandemic drags on.

Several council members brought up the possibility of restructuring assessment payments to help parishes and dioceses.

To that end, North Carolina Bishop Suffragan Anne Hodges-Copple asked: “What does it matter if we have great endowments and a balanced budget and we’re still closing churches?”

The Finance Committee will take council’s input into consideration while drafting a 2023-2024 budget to present to the 80th General Convention in July. The committee also reviewed requests from the dioceses in Province IX and Cuba for financial relief and assessment waivers, having met with representatives from the dioceses over the past few months.

Province IX is comprised of seven dioceses in Latin America and the Caribbean: Colombia, the Dominican Republic, Central Ecuador, Littoral Ecuador, Honduras, Venezuela and Puerto Rico. Puerto Rico has voted to switch to Province II, pending General Convention approval. In committee meetings, members went over the unique circumstances and hardships that each of the six remaining Province IX dioceses have endured over the past two years, from political crises to financial instability to natural disasters, on top of the pandemic.

Based on the dioceses’ requests for assistance and their specific circumstances, the Finance Committee increased the preexisting block grants to Province IX dioceses by varying amounts in the 2022 budget that council approved, but the topic introduced a larger discussion about the future of Province IX.

“The Province IX self-sustainability program is temporarily on hold until we can get better insights as to how to move forward,” the Rev. David Copley, The Episcopal Church’s director for global partnerships and mission personnel, told Episcopal News Service. “With COVID-19 affecting Province IX dioceses in different ways, we need to reassess before we decide on next steps.”

Honduras Bishop Lloyd Allen, a council member, thanked the governing body “on behalf of the six dioceses with which the Finance Committee met,” adding they felt heard.

“I want to express our gratitude for this situation, for the support,” Allen said. “It’s a sad feeling to know that we have to go back on what we had planned for the future and how we were doing things. … But we’re just asking for some time to get ourselves back together and to continue making a difference and sharing the word of God.”

Discussions about financial assistance for the Diocese of Haiti, also in Province II, are in their early stages, Lloyd said. The country has been beset by cascading political, health and social crises over the past year, including another devastating earthquake. Council adopted a resolution expressing support for the people of Haiti and the newly created Commission for Haitian Solution to the Crisis, which includes the Rev. Frantz Joseph Casseus, a priest in the Diocese of Haiti, the largest diocese by membership in The Episcopal Church.

In other business, council also approved a resolution condemning the House of Bishops of the Anglican Church in Ghana’s endorsement of a proposed “draconian” anti-LGBTQ+ law. The proposal would impose a penalty of up to five years in prison for identifying as LGBTQ+ and up to 10 years for advocating for the rights of LGBTQ+ people, according to Reuters.

The resolution “reaffirms The Episcopal Church’s commitment to people of all genders and sexual orientations and invites the House of Bishops in Ghana to reconsider their endorsement of this anti-LGBTQ legislation,” the Rev. Lillian Davis-Wilson said.

Council also adopted a resolution expressing a message of support for the people of Sudan, where military leaders overthrew the government in a coup on Oct. 25.

Earlier in the meeting, continuing the church’s efforts to educate Episcopalians further about the Doctrine of Discovery and the harms perpetrated on Indigenous peoples by the government and institutions, including The Episcopal Church, council heard from the Indigenous Boarding Schools Ad Hoc Committee. The committee is working to address The Episcopal Church’s involvement with residential schools that separated Native American children from their families and, in many cases, attempted to eradicate their culture and language. Indigenous leaders discussed the diversity of the residential school experience and a recent effort assisted by Episcopalians to repatriate the remains of residential school students from school grounds to their tribal homelands.