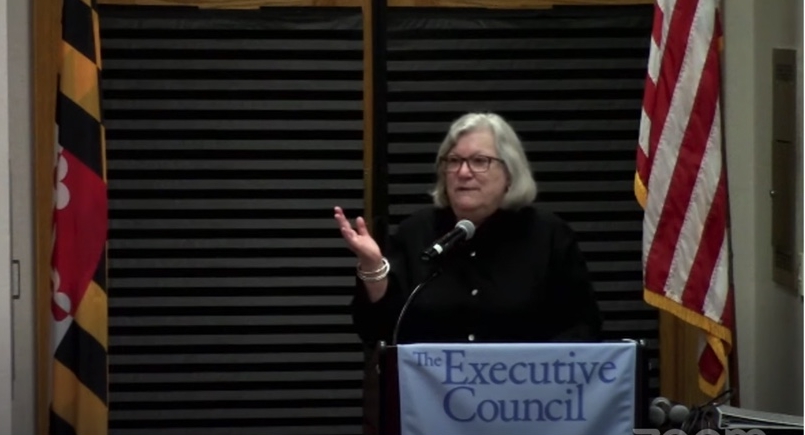 The Rev. Gay Clark Jennings, president of the House of Deputies, speaks to Executive Council in Linthicum Heights, Maryland, on Oct. 25, 2021.

[Episcopal News Service] The Episcopal Church Executive Council’s first meeting with in-person attendance since February 2020 opened on Oct. 25 with addresses from church leaders on the state of the church, as a tumultuous year and a half has given way to a new normalcy.

The four-day meeting’s hybrid format, with some council members gathered in Linthicum Heights, Maryland, and others joining by Zoom, represents the church’s capacity to persevere through adversity and adapt, noted both Presiding Bishop Michael Curry and the Rev. Gay Clark Jennings, president of the House of Deputies, in their opening remarks. Watch the full opening plenary session here.

Out of a litany of the social crises that have befallen the United States and the world in 2020 and 2021 – from the suffering wrought by the COVID-19 pandemic to the reckoning on racial justice – “something good is emerging,” Curry said, adding that the church did not falter but lived into its mission more deeply.

“The good news is only good news when you face the bad news,” he told council. “In the midst of this, I have seen this church do what I never thought it would do or could do. I’ve seen goodness rise up in spite of the fact that we were a little confused by what was going on around us. I’ve seen people try to figure out, how do we care for each other?” 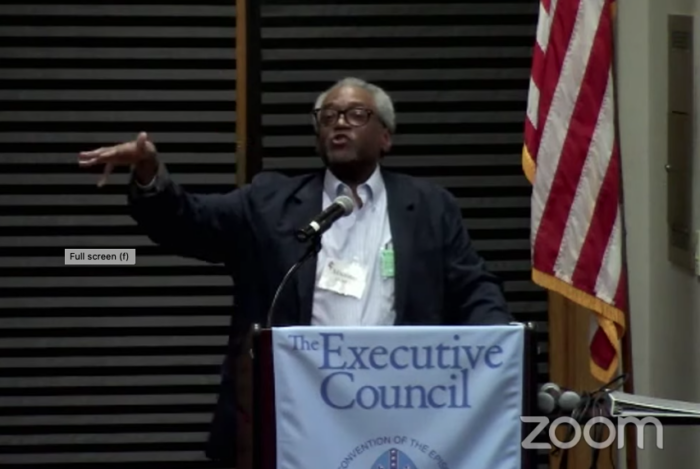 Presiding Bishop Michael Curry offered opening remarks on the first day of The Episcopal Church Executive Council’s Oct. 25-28 meeting being held online and with some members in person in Linthicum Heights, Maryland.

Curry praised the church’s rapid transformation to a primarily virtual institution during the first few weeks of the pandemic, saying it proved that radical change is possible despite the church’s failure to embrace change in the past. He compared that transformation to the outcome of the Taskforce for Reimagining The Episcopal Church, or TREC, created by Resolution C095 of the 77th General Convention in July 2012. Its dual mandate was to reimagine The Episcopal Church and present a plan for reforming the church to facilitate its “faithful engagement of Christ’s mission … in a way that maximizes the resources available for that mission at all levels of the church.” The resolution passed both houses unanimously. The task force’s report, released in December 2014, acknowledged that the church’s structure and governance had not changed in response to the “profound changes occurring across the country and the world.”

“If we had a commission,” Curry said in his opening remarks, “another kind of TREC that would have said … ‘Episcopal Church, you must move your worship from the buildings that you love and put it online,’ I guarantee you the same thing that happened to the TREC report would happen to that report.

“But necessity is the mother of invention,” he added. “The Episcopal Church got online. … We figured out and we’re doing it.”

In her opening remarks, Jennings outlined two ways for the church to engage in the work of social justice: first, by addressing gun control in the U.S. and, second, by advocating for the rights of LGBTQ+ people in West Africa.

On Sep. 21, Jennings and Curry joined other interfaith leaders in signing a friend of the court brief supporting reasonable gun legislation in the U.S. Supreme Court case New York State Rifle & Pistol Association v. Bruen. The case challenges the constitutionality of a New York law that requires applicants seeking a permit to carry a concealed handgun in public to show “proper cause” for self-defense. The brief addresses the burdens on religious institutions and individuals imposed by the unrestricted ability to carry concealed weapons, as well as the potential costs and burdens of increased security and insurance liability measures. Arguments are scheduled in the Supreme Court for Nov. 3. (The Episcopal Church has long called for more sensible gun control legislation. For more information on how you can act, click here.)

Jennings also noted that the House of Bishops of the Anglican Church in Ghana – a member of the Anglican Communion – has endorsed a “draconian” anti-LGBTQ+ law now awaiting a vote in the Ghanaian parliament. The bill would impose a penalty of up to five years in prison for identifying as LGBTQ+, and up to 10 years for advocating for the rights of LGBTQ+ people, according to Reuters.

Jennings said the Ghanaian bishops’ action contradicted the 2005 commitment of the primates of the Anglican Communion to stand against the “victimization or diminishment” of LGBTQ+ people and reminded council of The Episcopal Church’s 2015 resolution committing the church to work with its Anglican partners in Africa to oppose anti-LGBTQ+ laws there. Jennings said she hoped council would explore possible responses during its meeting.

“I expect that it has not yet been possible to understand exactly what has transpired in the church in Ghana and what kind of risk our LGBTQI friends and allies there are now facing, but we must commit ourselves to standing with them in whatever ways we can,” she said.

Jennings also spoke about the disparate societal impacts that the pandemic has had based on socioeconomic status.

“I have been reflecting on the ways this pandemic will be with us for a long time to come, particularly through the troubling disparities that it has exacerbated in the United States and throughout the world. In the United States, the wealth gap before COVID was already enormous. Now it’s much worse,” she said.

“In short, if you started the pandemic with a lot of privilege, and I include myself, there’s a good chance that you have more of it now. And if you didn’t, things might well be worse for you and those you love than they were in March of 2020.”

Jennings also encouraged members of council to read the recently released 2020 Parochial Report, which for the first time included both quantitative and qualitative data in the form of narrative responses. In addition to the many successes the report shows, it also showed that “COVID hasn’t just widened disparities among individuals. It has also widened the gap that separates our congregations” in terms of financial resources and attendance, she said.

Treasurer Kurt Barnes gave an “optimistic” summary of church finances that echoed some of Jennings’ observations, noting that the church’s investment portfolio has delivered strong returns in spite of the pandemic because of record-high stock market performances. Barnes explained that although the pandemic has been financially devastating for many Americans – 45% of whom do not own stocks – the church’s investments are healthy, and income from dioceses and trust funds is coming in as expected.

Barnes did mention one unexpected legal expense. Earlier this year, the U.S. Supreme Court on Feb. 22 declined to hear the then Episcopal Diocese of Fort Worth’s appeal of a state court ruling, leaving more than $100 million of diocesan property in the hands the Anglican Church in North America, or ACNA. “To further resolve the matter, with no admission of liability,” in August, The Episcopal Church paid $4.5 million to ACNA “to protect and defend all loyal Episcopalians in North Texas and allow them the freedom to move forward in their congregations,” according to The Episcopal Church’s Office of Public Affairs.

Among the items to be discussed in committees during the council meeting, which continues through Oct. 28, are the finalization of The Episcopal Church’s 2022 budget and requests from the Province IX dioceses for financial relief and assessment waivers. The Rev. Mally Lloyd, chair of council’s Finance Committee, said her committee has reviewed those requests in consultation with representatives from Province IX and will present its recommendations. Council will also hear from the Indigenous Boarding Schools Ad Hoc Committee, which is working to address The Episcopal Church’s involvement with residential schools that separated Native American children from their families and, in many cases, attempted to eradicate their culture and language.