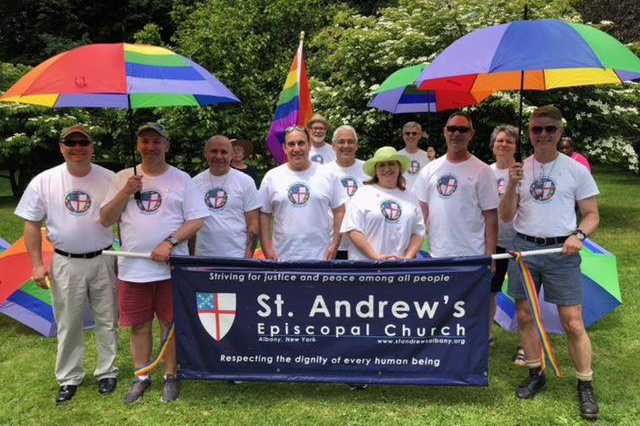 Members of St. Andrew’s Episcopal Church in Albany, New York, pose for a Facebook photo promoting it as a congregation that “welcomes ALL for worship, fellowship and service.”

Editor’s note: Rather than debate whether to change the Diocese of Albany’s canons, lay and clergy delegates voted 126 to 116 for a procedural amendment that said no canonical changes would be made during the Zoom meeting. (The discussion starts at the 33:00 mark on this video.) The next time the diocese will be able to consider the resolutions is at its next in-person diocesan convention, scheduled for June.

[Episcopal News Service] The Diocese of Albany, the last remaining U.S. diocese in The Episcopal Church to prohibit same-sex marriage, will vote later this week on whether to amend its canons to comply with the church’s mandate to give LGBTQ+ people full access to the rites of marriage and ordination.

The two resolutions that will be put to a vote at the Oct. 23 diocesan convention would repeal the diocese’s canons that prohibit clergy from officiating same-sex weddings (and the use of diocesan property for such weddings) and restrict ordination to people who are in heterosexual marriages or celibate.

Those canons have remained on the books despite the resignation of former Bishop William Love on Feb. 1. At the time, Love was the only U.S.diocesan bishop remaining in The Episcopal Church who refused to implement General Convention Resolution B012, the 2018 measure that allowed all Episcopalians access to marriage rites, including same-sex marriage where it is legal. A disciplinary panel determined in October 2020 that Love’s refusal violated church canon law and his ordination vows. Love resigned rather than face further disciplinary action and joined the Anglican Church in North America.

Michaels, who is priest-in-charge of five churches known as the Adirondack Mission and a former New York assistant attorney general, has spoken out in favor of allowing same-sex marriage in the diocese before, even offering to marry same-sex couples in defiance of the diocesan ban, though he has not been asked to and doesn’t know of any couples who have officially requested it.

Michaels said a group of lay Episcopalians from Albany asked him to sponsor the two resolutions. And, he argues, even those who don’t personally endorse same-sex marriage should support the resolutions. Under B012, as with any wedding, it is up to the priest’s discretion to marry a couple or not. (If a same-sex marriage is to take place in a diocese where the bishop is against it, B012 also allows for an outside bishop to provide pastoral oversight to the couple.)

“I’m fully supportive of clergy who, for theological or other reasons, do not feel comfortable presiding and blessing such marriage ceremonies,” Michaels told Episcopal News Service. “The repeal of these canons is not going to force anyone to take a different theological stance, personally, or to preside at a ceremony of the church that they do not feel comfortable with.”

Michaels said keeping the canons on the books would inevitably lead to a canonical conflict, “and I don’t think that would be good for the diocese.”

“The issue of same-sex marriage has really been settled in terms of permitting it to go forward by the last national convention of the church,” he told ENS. “Either these [canons] are unenforceable – in which case, why have them? – or if they are enforceable at the local level, they will certainly lead to challenge and litigation.”

Michaels said he doesn’t have a sense of the resolutions’ chances of passing, and it’s not clear whether there would be any immediate consequences if they don’t. However, he hopes it will at least begin a process of reconciliation and closure for a diocese that has been divided over the issue for years.

“Now that Bishop Love is gone, we hope to make the whole atmosphere more friendly for gay and lesbian Christians,” Michaels said.