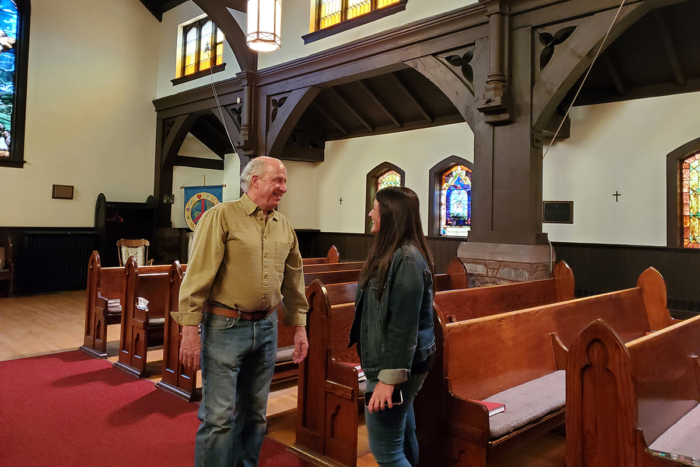 [Episcopal News Service] Grace Episcopal Church in Ishpeming, Michigan, has faced a double-edged dilemma in recent years – rising building maintenance costs and steadily fewer Sunday worshippers covering those costs. Across the street, the Cognition Brewing Company was dealing with its own difficulties. Its owner’s ambition to create a welcoming space for community gatherings had run up against a bitter landlord dispute.

This year, the Episcopal congregation and the brewery in this small Upper Peninsula city came together on a shared solution. Cognition Brewing is taking over ownership and maintenance of the 1902 church and eventually will move part of its brewing operations and a tap room there while opening the space to broader community use, in addition to the worship services that Grace Episcopal will continue to celebrate there.

The needs and missions of the church and brewery happened to align with each other, said the Rev. Lydia Kelsey Bucklin, the Diocese of Northern Michigan’s canon to the ordinary for discipleship and vitality. “It just ended up being a really good time and good movement of the Spirit that we started talking to each other,” Bucklin told Episcopal News Service.

The population of Ishpeming, about 15 miles west of Marquette, has declined by more than 300 over the past decade to 6,140 residents in the 2020 census. Grace Episcopal Church’s membership also declined during that period, down by half to about 45 in the latest parochial report data compiled by The Episcopal Church. Average Sunday attendance had dwindled to about a dozen worshippers before the COVID-19 pandemic.

“Church is community, and the community has a great love for this beautiful building,” the Rev. Ginny Graybill, a priest who serves at Grace Episcopal, said in a diocesan news release. “Like so many parishes nationwide, Grace has experienced a decline in active members over the years and with that maintaining our building became a great financial problem.”

In September 2019, Bucklin began working with the congregation’s leaders to envision a new path for its future. That discernment gained new urgency when the church’s furnace failed last year, Bucklin said, adding another emergency expense, $35,000, to the congregation’s financial burden.

During one of Bucklin’s conversations with the congregation, someone joked that a good model of community vitality could be found nearby, at Cognition. Under founder and owner Jay Clancey, a lifelong Ishpeming resident, the brewery had become a hub of activity, drawing beer lovers and also local cyclists, and it was known in the area for hosting food drives and raising money for an animal shelter.

“What was so unique about Cognition was the sense of family that had been built by Jay and his team,” Bucklin said. “Most everyone who came in for a beer was known by name, and I was blown away by the philanthropic activities and outreach they were involved in.” Church leaders reached out to Clancey about a possible partnership. 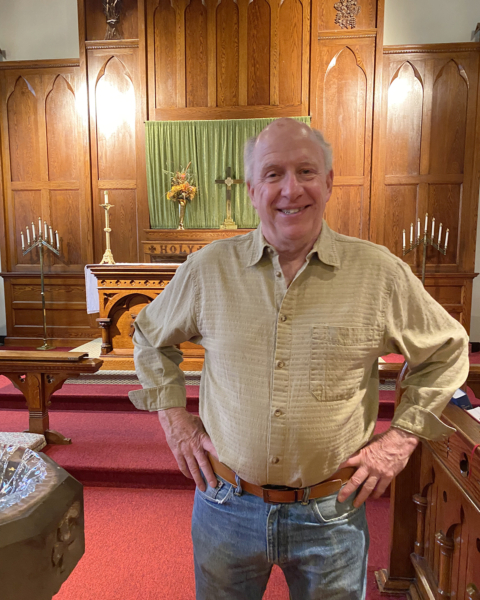 Jay Clancey, an 68-year-old lifelong Ishpeming resident, is an electrician by trade and opened Cognition Brewing Company in 2015 in a rented building across the street from Grace Episcopal Church. Photo: Diocese of Northern Michigan

Clancey, an electrician by trade, opened the brewery in 2015 and has been locked in a legal battle with his landlord for several years over who was responsible for unpaid utility bills. In May, the landlord allegedly cut backup power to the brewery and assaulted one of Clancey’s employees, according to coverage of the incident by WLUC-TV. In June, Clancey said he would move the brewery out of the landlord’s building as he pursued the partnership with Grace Episcopal Church.

Episcopal leaders embraced Clancey’s vision for opening the church space to the public in new ways. He was inspired by the British “Pub Is the Hub” movement, in which taverns go beyond serving beverages and provide gathering places that bring communities together. Although some members of the church were hesitant to let go of the traditional use of the building, Bucklin said, the congregation agreed to move forward and the vestry voted on June 13 to give the building to the diocese with the intention of selling it to Clancey. That plan was endorsed by diocesan leaders on July 30, and they have been working with Clancey over the past few months to finalize details of the physical transfer, with a token purchase price of $100. The two sides also agreed on a covenant for the congregation to continue using the space for worship and ministries.

Clancey plans to maintain the church’s woodwork, stained-glass windows and other historic features, keeping the space true to its roots as a place of worship. The altar will be shifted to the other side of the sanctuary with movable seats, so weekly worship services can continue. The brewery will reconfigure the rest of the space in the style of a German beer hall, with pews repurposed for use by tap room patrons around long tables. Community groups already have expressed interest in collaborating on events there when the space is ready.

Clancey, 68, is reimagining his business as Kognisjon Bryggeri – Norwegian for Cognition Brewery – to signify a fresh start. His immediate focus is the development of a second brewery in Marquette. Redeveloping the Ishpeming church space will remain a work in progress for at least the coming months, though he told ENS he sees plenty of potential there.

In the Pub Is the Hub movement, Clancy said, “you’re sort of encouraged to have community events there, meetings, fundraising activities, to turn it into a place where people can enjoy a beer … but the other focus is building community relationships, just becoming a center of activity.”

He hopes to bring the same spirit to Grace Episcopal Church.