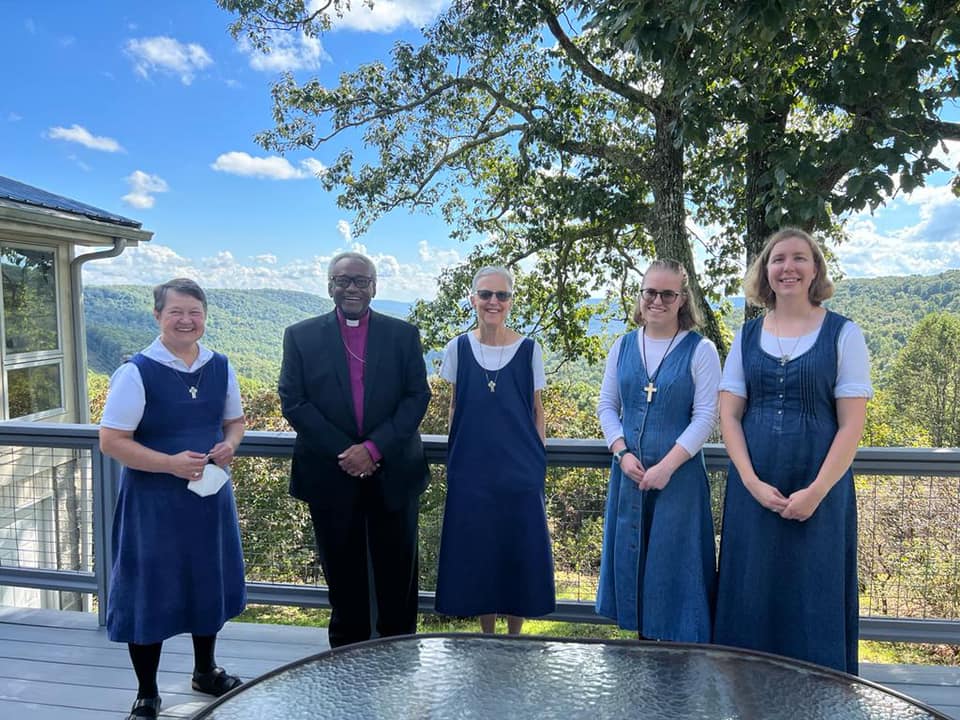 [Episcopal News Service] When Presiding Bishop Michael Curry talks about the sisters of the Southern Province of the Community of St. Mary, the oldest American Anglican religious order, his voice brightens with enthusiasm.

“These women are small in number, but boy, they are awesome,” Curry told Episcopal News Service after a recent visit.

And since the order’s Eastern Province, based in upstate New York, left The Episcopal Church in April, there’s something Curry wants Episcopalians to know about the women of the Sewanee, Tennessee-based Southern Province.

“I really want the church to know that the Southern Province of the Community of St. Mary is a part of The Episcopal Church, committed to it and loyal to it,” he said.

The Community of St. Mary is one of 32 religious orders and communities recognized by The Episcopal Church. Founded in 1865 in New York, the community sent sisters to establish a school and work with poor people in Memphis, Tennessee, five years before the 1878 yellow fever epidemic that decimated the city. Four of the five sisters died treating the sick; today the “Martyrs of Memphis” are honored in the church’s liturgical calendar on Sept. 9.

The sole surviving sister established the Southern Province in Sewanee, where the order ran a school until the 1960s. Today, there are four sisters at the Sewanee convent, where they live in the Benedictine monastic tradition, which emphasizes work, prayer and community. The sisters’ ministries include preaching, providing spiritual direction, leading retreats and growing produce in their garden. The community also includes one sister in the Philippines and a network of oblates and associates – laypeople who live elsewhere but follow the order’s rules to varying degrees and receive spiritual guidance from the sisters.

Until April, the community also included the larger Eastern Province, which has convents and farms in New York and Malawi. That province voted to leave The Episcopal Church and join the Anglican Church in North America, following the departure of the Rt. Rev. William Love, the former bishop of Albany who oversaw the province. In response, members of the Southern Province released a statement emphatically declaring their loyalty to The Episcopal Church, saying they were “going through some initial stages of grief” over the Eastern Province’s departure, but were “not totally surprised by their decision.”

“This house has always been more liberal than the Eastern Province,” Sister Madeleine Mary, prioress of the Southern Province, told ENS. “We knew that they were unhappy in The Episcopal Church, and so I was not surprised that they decided to leave. The surprise was how they told us. … All we got was a simple email.”

Still, the Southern Province received some negative feedback from people in the church who mistakenly thought they also had left. Curry visited the Sewanee convent on Oct. 7 “to affirm them by showing up,” he said.

Curry was impressed by the combination of their ancient Benedictine spirituality and their progressive views on topics such as LGBTQ+ acceptance, as well as the fact that two of the sisters are millennials. Curry even confirmed one of them when he was bishop of North Carolina.

He was especially interested in their Organic Prayer Program, in which young adults stay at the convent for up to 10 months, working in the garden and living in the rhythms of daily prayer. So far, 25 people have participated in the program, Sister Madeleine Mary said.

“We help them learn that care for creation is a religious and spiritual matter,” she told ENS, “and we also help them learn how to apply the Benedictine rule to their lives. They often use it for discernment for the next step in their life.”

As world leaders (as well as Episcopalian and Anglican representatives) prepare to attend the United Nations COP26 conference to discuss the climate crisis in the coming weeks, Curry said the sisters’ example is more relevant than ever.

“They really go deep in the soil,” Curry said. “They represent an important way of understanding and engaging with creation. … These people are praying about it and actually tilling the soil.”