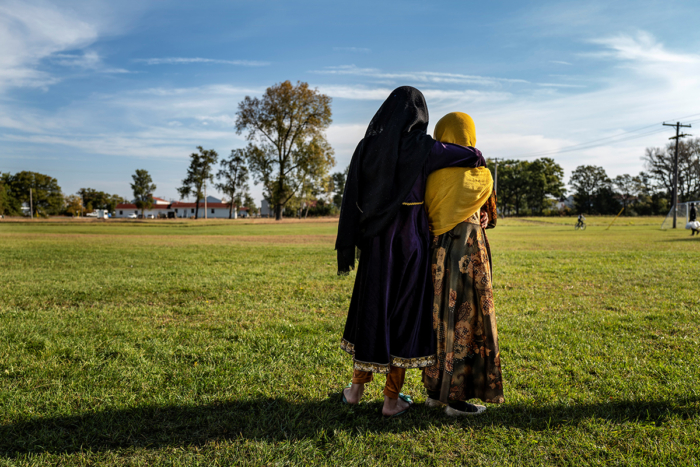 Afghan refugee girls watch a soccer match near where they are staying in the Village at the U.S. Army base in Fort McCoy, Wisconsin, on Sept. 30, 2021. Photo: Barbara Davidson/REUTERS

[Episcopal News Service] As churches across the United States consider ways to welcome Afghan families who fled the Taliban in their home country, Episcopalians in Wyoming are making headlines for countering the state’s reputation as the only one in the nation never to have a formal refugee resettlement program.

The vestry at St. Mark’s Episcopal Church in Casper voted unanimously on Sept. 20 to begin researching the process for sponsoring an Afghan family. The church formed a committee to work with Episcopal Migration Ministries on a plan to provide for such needs as housing and job placements, as well as to offer fellowship and other support to these potential new neighbors.

“Most Afghan families want to go where there’s an Afghan community. There’s no community here,” said the Rev. Jim Shumard, rector at St. Mark’s, but he told Episcopal News Service that he and his congregation hope to change that. “We pray other local churches will sponsor other families so that we can build community together.”

Last week, St. Mark’s efforts were profiled in a Washington Post article that highlighted residents’ past reluctance to welcome refugees to this strongly conservative and mostly white state. In 2020, 70% of Wyoming voted in favor of President Donald Trump, who made opposition to legal and illegal immigration a cornerstone of his campaigns and who, as president, reduced the number of refugees allowed into the United States to a historic low of 15,000.

All of these refugees will need to find places to live, and as they settle in new communities, many will receive help from one of the nine agencies that are part of the federal refugee resettlement program, including Episcopal Migration Ministries, or EMM.

“EMM continues to work through our network of 11 affiliates to provide services to arriving Afghans,” Kendall Martin, EMM’s senior communications manager, told ENS by email. “The greatest need continues to be housing.” Donations can be made online to EMM’s Neighbors Welcome: Afghan Allies Fund, and congregations and individuals interested in offering housing or volunteering can complete EMM’s online form.

“We are aware that there are Episcopal congregations and leaders in Wyoming who care about this issue and wish for Wyoming to be a welcoming state,” Martin added.

Wyoming Bishop Paul-Gordon Chandler would also like to see his state open its door to refugees.

“As the Episcopal Church in Wyoming, we desire to be a faith community that welcomes the stranger and embraces the ‘other,’ following the example of Abraham, who is not just our ancestor, but the ancestor of all Afghan refugees,” Chandler said in an email message to ENS. “As Wyoming doesn’t have a federally funded resettlement program, it will require extra creativity and commitment to make this happen. We are currently exploring together all that this will entail and look forward to what God may have in store as we journey down this road toward sacred hospitality.”

After the 20-year U.S. war in Afghanistan ended in August with the final withdrawal of American troops, an AP-NORC poll showed most Americans support welcoming Afghans who worked for the U.S. government and are open to welcoming others fleeing persecution from this country at the crossroads of Central and South Asia. About 50,000 Afghans were allowed into the U.S. under what is known as humanitarian parole. Some may be able to apply for special immigrant visas, while others will apply for asylum.

Wyoming State Rep. Landon Brown, a Republican, told NPR this week that he supports welcoming Afghans but expects some resistance. “It’s a very difficult conversation to have here in Wyoming, strictly because of our small population and the fear of what that influx of immigrants may look like to our small population,” Brown said.

Wyoming, with 580,000 residents, is the least populous state in the country. It is nearly 84% white, not including Hispanic residents, compared to 60% of the United States population, according to the U.S. census. Of all U.S. residents, 14% were born in another country; in Wyoming that number is 3.4%.

While several neighboring Western states have offered to receive Afghan families, a spokesman for Wyoming Gov. Mark Gordon said in August that he “has no interest” in doing the same. Gordon’s office told the Washington Post more recently that the governor was open to developing a process for faith groups to host evacuees.

Wyoming has no refugee resettlement program. But some hope to host Afghan evacuees anyway. https://t.co/73R5KlKhEE

Shumard said he has not received any negative response from parishioners or the local community to his congregation’s interest in sponsoring an Afghan family. The only “hate mail” he said he received was an email from an anti-Muslim critic from out of state who reacted to the Post article.

Shumard’s first experience with welcoming refugees dates back more than two decades to when he was serving at Grace Episcopal Church in Gainesville, Georgia. That congregation helped settle and support families from Bosnia. Shumard is confident that families from Afghanistan will feel just as welcomed by Wyoming residents. “I think there are enough voices that want it to happen, that it’s a great opportunity,” he said.

For Christians, that spirit of welcome is biblical, he said, citing Jesus’ command in Matthew 25 to feed the hungry, clothe the naked and welcome the stranger. “It’s not only what Jesus would do,” he added. “It’s also a way to honor the work that our soldiers did. … They said they couldn’t do their job without these [Afghan] interpreters and allies. So few of us fought in Afghanistan or worked in Afghanistan. I feel this is a way for us to do our part.”

The committee at St. Mark’s is working with members of a missionary community called The Table to recruit enough volunteers to establish a viable welcoming team. Some already have started looking into options for housing and jobs, if and when they are able to introduce an Afghan family to Casper, a city of about 58,000.

As the congregation takes the process one step at a time, “I’m just sort of trusting the Spirit is working in this,” Shumard said.