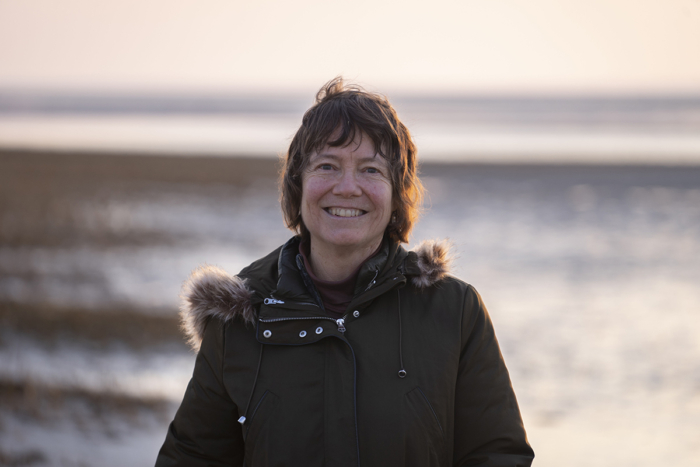 The Rev. Margaret Bullitt-Jonas is an author and priest who regularly preaches about climate change. She lives in Massachusetts and is pictured here on the beach in Cape Cod. Photo: Robert A. Jonas

[Episcopal News Service] The Rev. Margaret Bullitt-Jonas is looking ahead to COP26, the 2021 United Nations Climate Change Conference, which begins Oct. 31 in Glasgow, Scotland. “This is a moment when we have a chance to make our voices heard, to make it clear that Americans care deeply about the climate crisis and want solutions,” she recently told Episcopal News Service. “We have this very rare window of opportunity to push for real climate solutions that are just. There’s plenty to preach about, and I’m hoping that folks will feel encouraged.”

Bullitt-Jonas noted that many Americans are paying attention to climate change in a new way right now, amid a pandemic and after a summer of unprecedented weather, from a heatwave in the Pacific Northwest and Hurricane Henri’s record-breaking rainfall to deadly flooding in Europe, plus a startling United Nations Climate report. But she first took note, viscerally, in the late 1980s, when she was fresh out of seminary and first learned about the greenhouse effect. That, along with the Exxon Valdez oil spill in 1989, broadened her life’s work to include climate activism.

Twenty-four Episcopalians will represent The Episcopal Church online at the COP26.

Creation care resources are available from the church here.

After 25 years of parish ministry in Massachusetts, Bullitt-Jonas became the Diocese of Western Massachusetts’ missioner for creation care in 2014. She serves in the same role for the Southern New England Conference of the United Church of Christ and, since January, has been the Diocese of Massachusetts’ creation care advisor. Throughout her career in ministry, she has advocated for climate change mitigation within The Episcopal Church and beyond. In 2016, she received the Steward of God’s Creation Award from the National Religious Coalition on Creation Care. She taught at Episcopal Divinity School when it was based in Cambridge, Massachusetts, and she regularly leads retreats and preaches on climate change.

Bullitt-Jonas, who turns 70 this month, is a cradle Episcopalian who left the church when she went to college and returned while confronting the eating disorder she’d lived with since adolescence. That return led her to seminary. She has contributed to a variety of publications and anthologies, and has written three books, including “Holy Hunger: A Woman’s Journey from Food Addiction to Spiritual Fulfillment,” a memoir of recovery from food addiction, published in 1998. Most recently, she co-edited and contributed to “Rooted and Rising: Voices of Courage in a Time of Climate Crisis,” published in 2019.

Bullitt-Jonas recently spoke with Episcopal News Service about her life, her work and the moral imperative of fighting climate change. The rest of ENS’ interview with Bullitt-Jonas has been condensed and edited into the Q&A below.

ENS: In your book “Holy Hunger,” you write about reconnecting with God via a 12-step program to address your eating disorder. You’ve used the word “surrender” to describe it. What was that like?

Bullitt-Jonas: My eating disorder began in adolescence and continued through my 20s. I was eating out of control, and I felt hopeless and full of despair. I reached the point where it felt like a life-or-death choice: Did I want to be fully alive, or did I want to be on this deathly path where I never felt fully free? So I made the choice for life. That brought me into the 12-step program. It’s a surrender of the ego. To me, it’s responding to Jesus’ invitation to surrender to this power of love, which alone can transform us and guide us. I went back to church, and for a long time, I sat in the farthest pew in the back, and I just watched and listened, and during the week, I’d go to the basement of some other church and go to 12-step meetings and do the hard work of clearing up my life and getting honest with myself and other people.

ENS: You’ve been a parish priest whose climate justice activism was more on the side before you sought your current role. Can you talk about balancing parish ministry and climate activism?

Bullitt-Jonas: I feel blessed because I can give this ministry my full-time attention; parish priests are juggling multiple responsibilities and have multiple claims on their time. Our vocation is always the same. It’s to follow Jesus. But the only way that we can do that authentically in the midst of climate emergency is to weave care of creation into every aspect of our life as a congregation — preaching, prayers, outreach, children’s education, adult education — so that it equips us to face this emergency. Once people know how close we are to sliding into climate catastrophe, they tend to shut down. Faith communities can push back against helplessness. My heart goes out to parish clergy. I know how hard the work is, and I want to offer every support I can to help us re-form the church so we are meeting the crisis directly, wisely and effectively.

ENS: On the “Spirit Matters” podcast, you said you are interested in spiritual practices that keep us grounded amid a climate emergency. What are examples of this?

Bullitt-Jonas: I have an ongoing appreciation for sitting in silence and listening for the inner voice of love, so contemplative prayer continues to be important to me. What’s newer is spending time outdoors in a prayerful way as a practice of healing and restoration. One of my big learnings has been that it’s not just “I’m here to save the Earth,” but that the Earth also saves me, so practices that invite a sense of reciprocal dynamic relationship between us and the Earth. And there’s so much to grieve; the loss of the natural world around us and the loss of the future that we wanted for our children. So we grieve — this is what makes it a spiritual practice — in the presence of a loving God. And then even if our heart is still sad, we move into action.

ENS: What led you to co-edit and contribute an essay to the book “Rooted and Rising”?

Bullitt-Jonas: Leah Schade, who’s a Lutheran minister, she’s also an active climate justice advocate, and she had a competition for sermons on climate change. I sent her a sermon, and I won. Then she reached out to me and said, “Hey, what if the two of us co-edited a book and collected essays about spiritual resilience?” There have been so many books, probably hundreds, on “why my faith tells me to care about the Earth.” But we wanted a book that would help us. So we asked contributors questions like, “Given what you know about climate crisis, how do you not fall into despair? What gives you courage? And how do you define hope?” Leah and I felt that we wanted such a book, so we decided to create one.

ENS: You wrote in the Anglican Theological Review that preaching about the climate crisis scares many clergy members. Can you talk about that?

Bullitt-Jonas: It’s scary, in any case, walking up to the pulpit to preach. But when you’re going up to preach on a topic as controversial as climate change, it can be plenty scary, and it’s very tempting to kick the can down the road. I want to say to clergy that it’s good to know the basics, but you don’t have to be an expert on science. Clergy need to know which theological touchstones provide our moral framework for understanding the crisis. Is it “God so loved the world, so we need to love the world the way God loved the world”? If you define success as maintaining the web of life as it has evolved — well, we’ve already lost that battle. So it’s not about success. It’s about faithfulness, it’s a question of identity: Who are we? If our parishioners come to understand that the climate crisis is a justice issue, that’s where people become motivated to make changes. They [say], “It’s not fair that low-income people and people of color are hurt first and hardest by climate change. It’s not fair that children are being robbed of a stable future.”

ENS: Even people who aren’t activists have become aware of many societal problems during the pandemic, including climate change. Are people looking for religious leadership on this in a way that maybe they have not been?

Bullitt-Jonas: I do think people are hungry for religious leadership. When my job was first announced early in 2014, it got a surprising amount of media attention. I felt as if the public was really interested in knowing that the church actually cares and has a voice. And a changing climate affects everything we care about. So if I were leading a faith community, I might want to notice, What does this community already care about? Do they already care about refugees and the poor? Do they already care about hunger or the local food pantry? And then Google that. Look up “children’s health and climate” or “refugees and climate.” So if we look for comprehensive climate change solutions, we will also be tending the concerns already on our hearts.