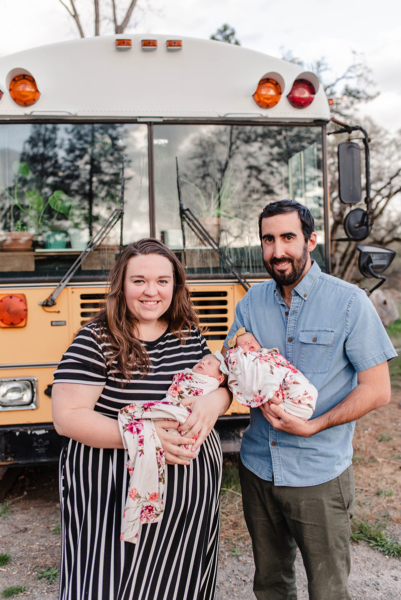 The Rev. Angela and Rico Lerena with twin daughters Ashton and Jayden stand in front of the 1997 school bus they converted into a home. Photo courtesy of the Lerenas

[Episcopal News Service] One California priest came up with a novel solution to the state’s pricey housing market: The Rev. Angela Lerena and her husband, Rico Lerena, became “skoolies” — purchasing a decommissioned school bus for $4,000 and converting it into a home.

For Lerena, 30, spending an additional $10,000 to render the 40-foot, 1997 Thomas Saf-T-Liner livable was as much a ministry direction as a practical necessity. She was serving as executive assistant and administrator of the Episcopal Diocese of San Joaquin and as curate at St. James Cathedral in Fresno, where housing prices had jumped 39% over the past four years, including a 12% hike during the pandemic.

Student debt from ministry studies — she had earned a bachelor’s degree in intercultural ministry and a master’s in missional leadership from the Northwest Nazarene University in Nampa, Idaho — plus owning pit bulls, locked her and her husband out of the rental market, she said. Experiencing the lack of available affordable housing prompted Lerena “to think about housing differently and how can we think about giving dignity to people so that they can own their own space at a reasonable cost.”

Lerena has since become the associate rector of St. Michael’s Episcopal Church in Colorado Springs, in the Diocese of Colorado. Her new role includes housing in a rectory, but she still plans road trips in her former home. She said issues of sustainability linger, such as, “What does it mean to simplify our spirituality in a way that isn’t about owning things for the sake of owning them?” 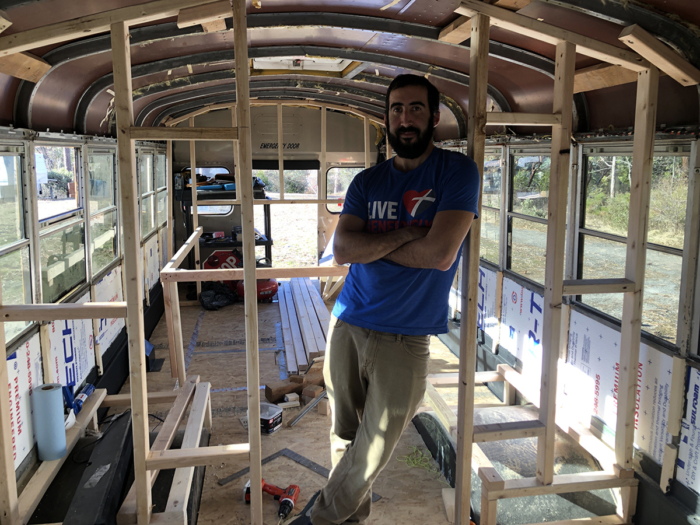 Rico Lerena during the construction. Photo courtesy of the Lerenas

While in San Joaquin, she and Rico, a carpenter who is originally from Uruguay, had encountered the millennial-driven skoolie movement, which involves “the quest to simplify life, not having to buy into the American ideal of a huge house that you spend all your time cleaning and paying for,” she told Episcopal News Service.

“Skoolies use every nook and cranny of space,” she added. “There’s no unused space, which allows us to be more intentional about spending time with our family” including three pit bulls, a tailless tabby and 6-month-old twin daughters, Jayden and Ashton. 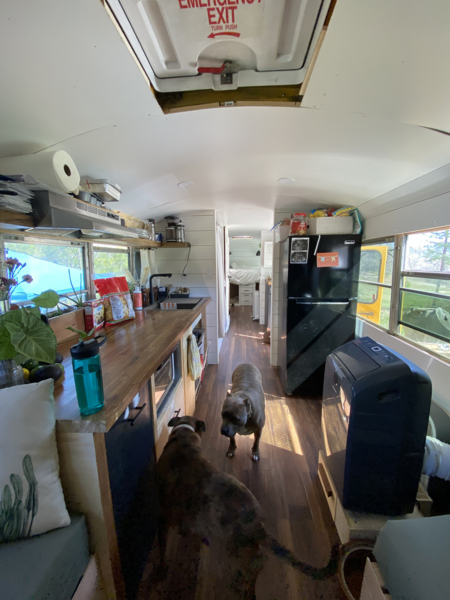 The Lerenas lived in the school bus along with their pit bulls and a cat. Photo courtesy of the Lerenas

After purchasing the bus, the Lerenas spent the next 18 months gutting the interior, learning to install plumbing, electricity, flooring, drywall, an indoor-outdoor cat litter box, under-the-bed dog kennels, two couches that converted to a queen-sized bed, an 8-foot kitchen counter, a full-size refrigerator, a 90-gallon combination bathtub and shower, a vanity and sink, shelving, a washer-dryer area and even garage-like space accessible from the vehicle’s rear.

“Angela is extremely resourceful, in repurposing and recycling, being able to take something and make it work and reuse it and do something different with it,” Rice told ENS. “There is stewardship in that perspective on life that bodes far more sustainable for the future than using things up.”

Lerena grew up in the Church of the Nazarene and joined The Episcopal Church after a 2014 internship at Grace Church in Nampa, Idaho, a small congregation about 20 miles west of Boise. Fed by the Eucharist and the liturgy and inspired by the church’s outreach – a community garden, an after-school program and a Spanish-language ministry – Lerena earned an Anglican Studies Certificate from the Church Divinity School of the Pacific in Northern California. 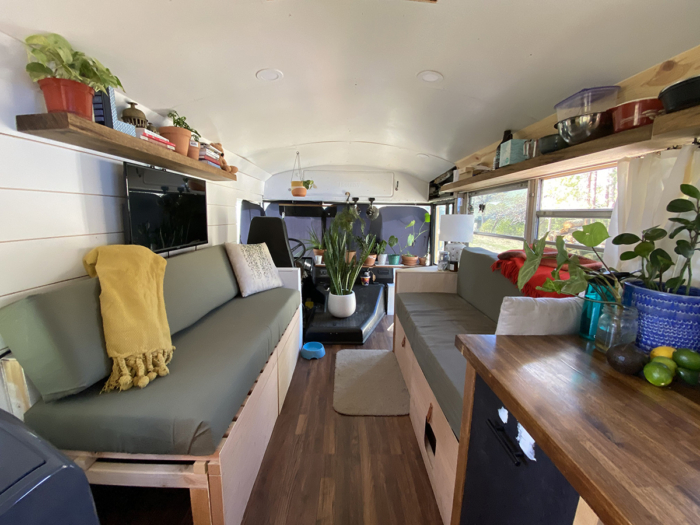 Two couches convert into a queen-size bed, with storage space and dog kennels below. Photo courtesy of the Lerenas

Her bus life has emulated her ministry, said the Rev. Ryan Newman, who was dean of St. James Cathedral as Angela juggled a variety of roles.

“She is extremely creative and resourceful. If she can do the same thing with a congregation, her ministry will grow leaps and bounds,” said Newman.

The Lerenas parked the bus at the Episcopal Church and Conference Center in Oakhurst, an hour from Fresno, and its location led to an evangelism opportunity when they encountered a 20-something skoolie couple parked nearby as they waited for entry passes to Yosemite National Park.

“We shared meals together. It turned out, she was Catholic but really eager to meet a female priest and to hear more progressive concepts of being church,” she recalled. “We would never have stopped and met them had we not also lived in a school bus. Because of the bus, we’ve met incredible people. I can’t help but wonder, who are we not meeting, that we’re called to, as church? How do we engage different people?”

– The Rev. Pat McCaughan is a priest in the Diocese of Los Angeles and an occasional contributor to ENS.