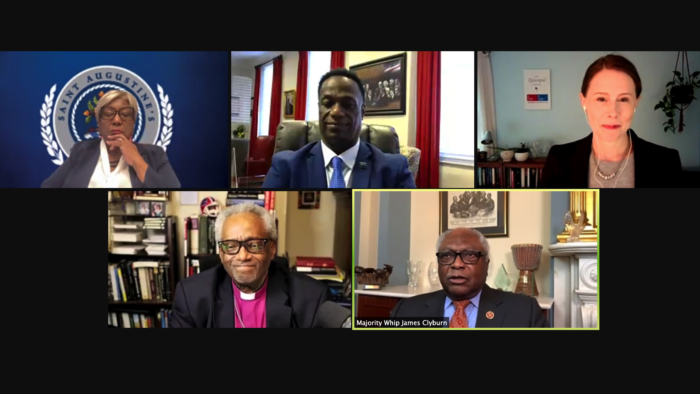 [Episcopal News Service] House Majority Whip James Clyburn of South Carolina joined Presiding Bishop Michael Curry and the presidents of Saint Augustine’s University and Voorhees College in a Sept. 29 webinar promoting the role that historically Black colleges and universities have played in educating students to participate in and contribute to American society.

Saint Augustine’s in Raleigh, North Carolina, and Voorhees in Denmark, South Carolina, are the two historically Black institutions, commonly referred to as HBCUs, that have deep ties to The Episcopal Church. Clyburn, the third-ranking Democrat in the House, has been a congressman since 1993, representing South Carolina’s 6th District, which includes Voorhees.

“I’m a big champion of HBCUs,” Clyburn said, noting that he is a graduate of an HBCU, South Carolina State University in Orangeburg, and has received honorary degrees from Saint Augustine’s and Voorhees. “HBCUs are very important. They are historical treasures, and I commit myself to trying to restore every historic building on those campuses and help restore a sense of pride.”

The webinar, which drew nearly 400 viewers, was promoted by the church’s government relations and development offices, the latter of which oversees the Absalom Jones Fund and an annual donation campaign timed with the Feb. 13 feast day celebrating the first Black Episcopal priest. Director of Government Relations Rebecca Blachly moderated the discussion.

Visit The Episcopal Church’s Absalom Jones Fund page if you would like to make a donation.

“This is a moment where we’ve seen HBCUs in the spotlight more,” Blachly said, “and I think people are realizing the critical role these institutions play in our nation.

The schools have been in the news lately because of the debate over money for them included in the Biden administration’s proposed federal spending plan and because Vice President Kamala Harris graduated from an HBCU, Howard University in Washington, D.C.

Curry’s parents and extended family attended HBCUs, and as a parish priest in Baltimore, Maryland, he said many of the young people he ministered to would have been left behind academically if not for the boost they received while attending a historically Black college.

“These universities are taking young people and molding them and forming them, not just academically, but forming them spiritually and in terms of character and the moral fiber that they will need in order to make it in this world,” Curry said. “That’s an incredible gift.”

Historically Black colleges and universities were founded in the post-Civil War period to provide educational opportunities to Black men and women who were excluded from white institutions of higher learning because of segregation.

About 100 such schools are still open today across the United States, accepting students of all races. Enrollment at HBCUs has been in decline since hitting a peak in 2010, when 327,000 students attended one of the colleges. That trend mirrors an overall decline at all degree-granting institutions in the past decade, according to the federal government’s National Center for Education Statistics.

HBCUs still fill a “special niche” in the academic world, Clyburn said, but their importance often is overlooked by the wider society. “We’ve never just spent enough time getting people to understand what their role has been,” he said. (Clyburn also participated in a Sept. 30 church webinar promoting his legislation to make “Lift Every Voice and Sing” the country’s national hymn.)

The Episcopal Church’s recent work with historically Black colleges and universities coincides with a greater emphasis on racial reconciliation under the leadership of Curry, who was elected in 2015 as the first African American bishop to head the church. The church’s last two triennial budgets included more than $1.6 million for Saint Augustine’s and Voorhees, and the church is in its fourth year of raising additional money for the two schools through its Absalom Jones Fund, with proceeds topping $200,000 since 2018.

Saint Augustine’s “was founded to train freed slaves and bring folks into the ministry as ordained ministers in The Episcopal Church,” said Christine Johnson McPhail, the university’s president. The university is “still here and thriving today,” she said, though its mission has broadened as it prepares its students to enter the workforce and to contribute to society.

Voorhees encourages its students to volunteer in the local community, said Ronnie Hopkins, the college’s president. Students benefit from the welcoming environment on campus, but they don’t learn in isolation, he said. “We have a responsibility to reach out in the community.”

“HBCUs today, we are absolutely magnificent institutions. We are top institutions in the country,” he said. “We work with these students, and we take them to the next level of excellence.”