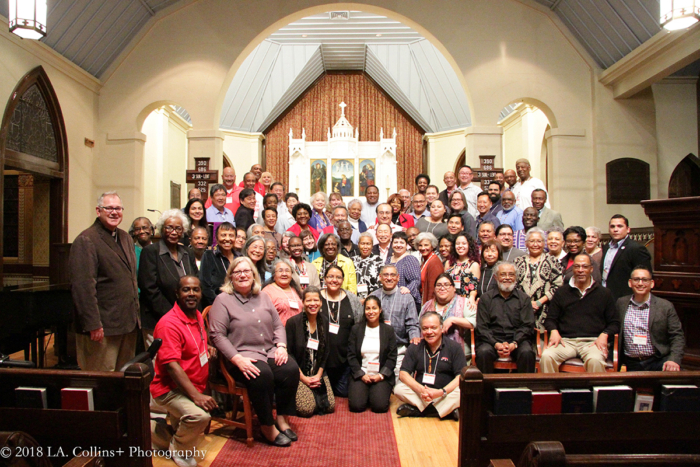 Members of the Deputies of Color pose for a photo with churchwide leaders during the 79th General Convention in Austin, Texas, in July 2018. Photo: Lynn Collins

[Episcopal News Service] A group of Episcopal clergy and lay leaders who self-organize as the Deputies of Color will kick off their preparations for the 80th General Convention on Sept. 25 with an online conference focused on “Truth Telling,” during which Episcopalians share their various experiences with racism in the church and in society.

The Deputies of Color is a standing umbrella group that combines the church’s four primary ethnic caucuses: Black, Indigenous, Asian and Latinx. Together, those caucuses total over 170 members – a large majority of the church’s estimated 230 total deputies of color – and many of them will be first-time deputies when they arrive in Baltimore, Maryland, in July 2022 for General Convention.

One of the primary goals of bringing the ethnic caucuses together as the Deputies of Color is “changing The Episcopal Church,” said Byron Rushing, vice president of the House of Deputies and a longtime lay leader from the Diocese of Massachusetts. Rushing will be one of the presenters during the Sept. 25 webinar, which will not be open to the general public.

“The Episcopal Church would never talk about racism if there were not people of color in their face,” Rushing said in an interview with Episcopal News Service. The Black caucus has organized for change in the church since the 1960s, he said, and coordinating with the other caucuses can amplify all voices. “We try to talk to each other so we can understand, so we can generally support each other in their specific resolutions.”

The Deputies of Color also helps prepare new deputies to understand how General Convention works and navigate the legislative process. They can learn the basics at a “General Convention 101” workshop to be held online Oct. 9, with participation from Rushing; the Rev. Gay Clark Jennings, House of Deputies president; and the Rev. Michael Barlowe, General Convention secretary. That workshop will be offered again in Spanish on Oct. 19.

Joe McDaniel, a deputy from the Diocese of the Central Gulf Coast and the convener of the Deputies of Color, said new deputies also can participate in a mentor program. They will be paired with experienced deputies who can answer questions and offer guidance before and during the 80th General Convention.

“That will only increase the effectiveness of the overall caucus,” McDaniel told ENS. He is a Pensacola, Florida, resident and past chair of the Black caucus. “We’ll be able to influence legislation – resolutions – and also the elections.”

That influence continues to grow. Jennings, while referencing a recent Racial Justice Audit of Episcopal Leadership, announced last month that 70% of the convention’s deputies of color will serve on legislative committees, making those committees the youngest and most racially diverse in recent history. Of the committees’ officers, 36% are deputies of color. Over 800 total deputies are certified so far to attend General Convention.

“Ensuring that House of Deputies legislative committees represent the full diversity of the church will not automatically correct the manifestations of structural racism that exist at General Convention,” Jennings said in a news release. “But I hope that more diverse legislative committee leadership and membership will help us make inroads in eradicating some of the injustice identified by the racial audit and help General Convention lead our church ever closer to Beloved Community.”

Becoming Beloved Community, the church’s cornerstone racial reconciliation initiative, inspired the theme and structure of the Deputies of Color’s Sept. 25 meeting, which will focus on “Telling the Truth,” one of four components of Becoming Beloved Community. Rushing and the other three main presenters will discuss the experiences of Black, Indigenous, Asian American and Latino/Hispanic Episcopalians.

“All of the various caucuses have a shared story of discrimination and racism in America, but we don’t fully understand the unique nature of the racism,” McDaniel said. “Our expectation is we will come out with a fuller understanding of the horrors of discrimination that each of the respective groups have encountered and still encounter, in America and also in The Episcopal Church.”

Heidi Kim, an Episcopalian from Minnesota, will share her thoughts on Asian American struggles against bigotry and violence. The March massacre in the Atlanta, Georgia, area of six women of Asian descent drew the nation’s attention to the growing “Stop Asian Hate” movement, and it also underscored that racism isn’t a simple Black-and-white binary, Kim told ENS.

“As we think about the way that we want to advocate for our own communities,” she said, “what is it we want to learn from our siblings in those other communities so [that] we are all about disrupting racism?”

Kim, though not a deputy, has experience working with the Deputies of Color in her previous position as The Episcopal Church’s staff officer for racial reconciliation. She now works as director of talent and organizational culture for the Minneapolis-based Propel Nonprofits.

“It’s just been such a crazy last two years,” Kim said – from the onset of the pandemic in March 2020 and the national dialogue on systemic racism after the police murder of George Floyd to the increasing attacks on Asian Americans and the underreported problem of missing and murdered Indigenous women.

“I’m hopeful our hearts have been broken open by these things,” she said. “It’s kind of a moment for people paying attention in a different way.”

Missing Indigenous women is one of the topics the Rev. Robert Two Bulls plans to discuss on Sept. 25 in his presentation during the online conference. Two Bulls serves as missioner for the Episcopal Church in Minnesota’s Department of Indian Work and Multicultural Ministries.

He also will talk about the “historical trauma” that Indigenous communities still experience today because of the system of boarding schools that once separated earlier generations of Native American children from their families and promoted their assimilation into white society at the expense of their own cultures and languages.

The Episcopal Church was connected to at least nine of the 367 boarding schools that have been identified by the National Native American Boarding School Healing Coalition.

“A lot of folks don’t really understand or see how it affects us today, those early assimilation practices,” Two Bulls told ENS. “One can argue that by opening the door to Western educational practices, that brought sort of the slow death of our oral traditions and how we look at the world.”

The legacy of those boarding schools faces increased scrutiny this year as the Department of Interior announced in June it was launching a comprehensive review of federal boarding school policies dating to 1819. The inquiry was prompted in part by the discovery of unmarked graves at a former Indigenous boarding school in Canada.

After online gatherings this fall, the Deputies of Color will hold an in-person workshop over a weekend in March 2022 in Baltimore, to foster personal connections among the deputies and finalize a list of legislative priorities for the group before they meet again at General Convention.

Wendy Cañas, co-chair of the Latinx caucus, is attending her second General Convention as a deputy from the Diocese of New York. Cañas is senior warden at St. Anne’s Episcopal Church in New York’s South Bronx. She said in an interview with Episcopal News Service that, as an immigrant from Honduras, she can relate to the experiences of other deputies in her caucus and in the broader Deputies of Color.

“We are able to come as one body of color and able to share everything, all the issues affecting us,” Cañas said. “We are fighting for equality among our church, and not only in our church, out in the world.”