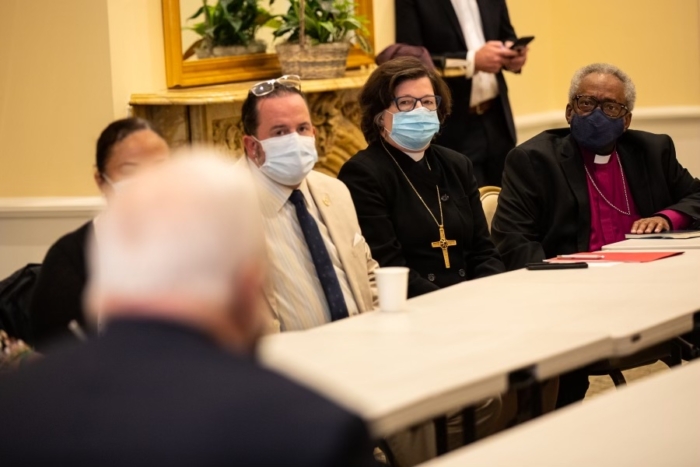 Circle of Protection includes leaders from a wide range of denominations, including Episcopal, Roman Catholic, Lutheran, African Methodist Episcopal, Baptist, Disciples of Christ and Quaker. Curry was one of 20 leaders who signed the group’s letter to President Joe Biden and members of Congress specifically urging passage of three bills focused on investing in infrastructure, supporting families and strengthening voting rights.

“If passed and signed into law they would strengthen the physical and social infrastructure of our society, cut family and child poverty more than any time in our lives, and ensure the precious right to vote for all people made in God’s image,” the Circle of Protection letter says.

The dozen faith leaders who visited the White House met with Melissa Rogers, Josh Dickson and Trey Baker, who run the administration’s Office of Faith-Based and Neighborhood Partnerships, and Cedric Richmond, director of the Office of Public Engagement.

“There’s a moral high ground that these bills have an opportunity to meet,” Curry said after the meeting in a news conference outside the White House. “That moral high ground is to make sure that the people most in need are cared for, and the symbol of our deepest need is our children. … That’s we stand for regardless of our religion, and that’s what this country stands for at our very best.”

The meeting follows Circle of Protection’s show of support for increases in the federal child tax credit and earned income tax credit. The group’s letter urges greater spending on housing vouchers “because a place to live for families draws us all together.”

“We believe that our nation is called to reduce poverty, expand opportunity, and address racial disparities – and that everyone, especially wealthy individuals and corporations, should pay their fair share,” Circle of Protection says in its letter. “The Bible is clear in its opposition to the concentration of wealth amid neglected human need. Those who have benefited the most should contribute to the common good of society and invest in the most vulnerable.”

The Senate passed a $550 billion infrastructure bill in August, but some Democrats in the House have pushed to link its passage to the passage of a broader $3.5 trillion budget plan that would address many of the Biden administration’s domestic priorities. The larger bill contains the support for families backed by the Circle of Protection leaders. Democratic leaders also are rallying party lawmakers behind the For the People Act and the John Lewis Voting Rights Advancement Act. The two voting rights bills, however, face uphill battles in winning over enough Senate Republicans to become law.

Today we met @WhiteHouse as a coalition of faith leaders w/@TheCofP to petition our govt. on behalf of the most vulnerable among us—our children, people with disabilities, the elderly, and their caregivers. pic.twitter.com/wz1miPgCZv

As the faith leaders advocate for the bills’ passage, their letter also calls on members of their denominations to join in the effort.

“At this moment of historic decision, we are urging the people in our churches and organizations to pay attention to what the President and Congress are doing and be active in advocacy that reflects biblical priorities,” the Circle of Protection letter says.

Curry has been vocal recently on the issue of children’s health and well-being. He argued in August in an opinion article for USA Today that all adults should get vaccinated against COVID-19 to help protect children under 12 who still are not eligible for the shots. He also issued a statement in June raising concerns about the U.S. Supreme Court ruling in Fulton v. Philadelphia, a decision that allowed foster care agencies to cite religious beliefs in refusing to place children with LGBTQ+ foster parents.

Curry’s Sept. 22 visit with White House staff members builds on the work of The Episcopal Church’s Washington-based Office of Government Relations, which regularly advocates in the capital for policies the church supports.

“We are grateful for the chance to meet with senior White House officials to ensure that protections for the most vulnerable are part of the legislative packages that are moving forward,” Office of Government Relations Director Rebecca Blachly told Episcopal News Service in an email. “We regularly work with the Circle of Protection – a broad coalition of Christian traditions – to push for domestic and international anti-poverty programs.”