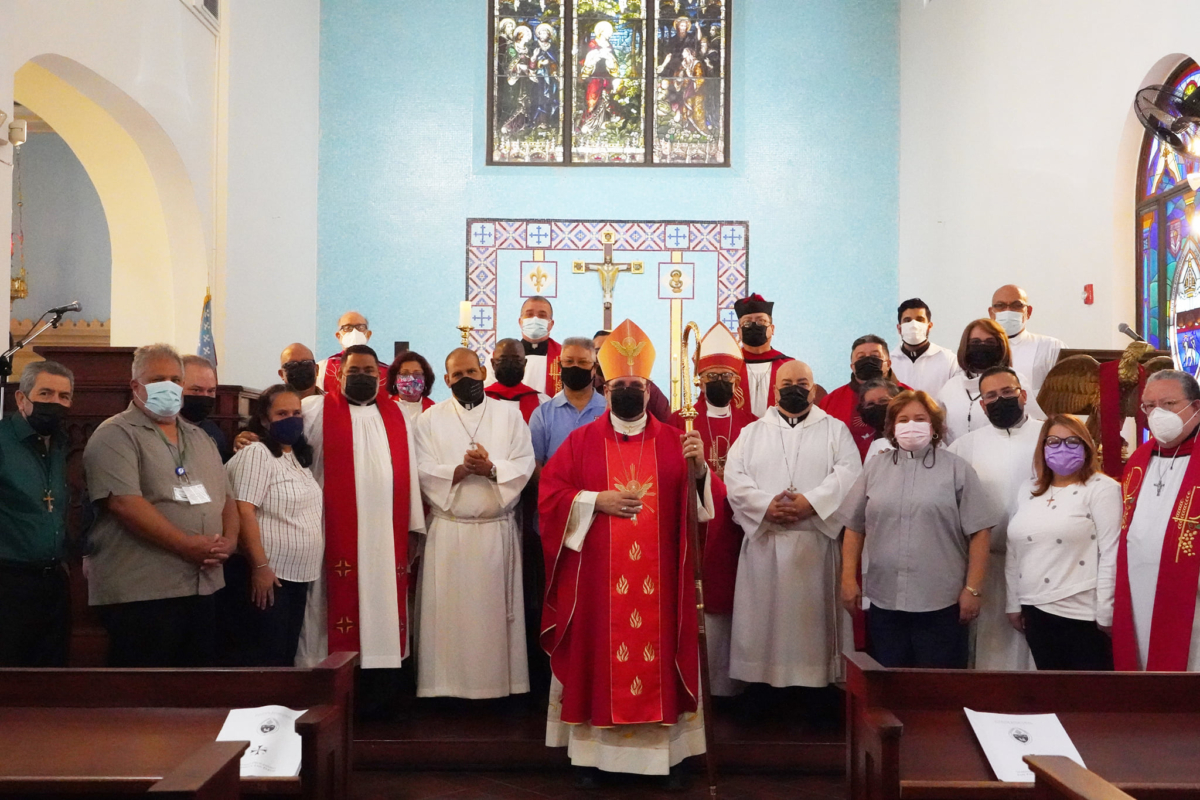 Puerto Rico Bishop Rafael Morales and seminarians at a Eucharist for the beginning of classes at the Episcopal Cathedral of St. John the Baptist in San Juan, Puerto Rico, in August 2021. Photo: Diocese of Puerto Rico

[Episcopal News Service] The Diocese of Puerto Rico is set to switch from Province IX to Province II after Province II’s synod unanimously voted to accept its request on Sept. 9. The change will go before the 80th General Convention in July 2022 for final approval.

The Diocese of Puerto Rico has been in Province IX – which currently consists of seven dioceses in Latin America and the Caribbean – since it was readmitted to The Episcopal Church in 2003. In April, the diocese presented a resolution to the Province IX synod stating its desire to change provinces, which the synod approved unanimously. The diocese then convened a special convention in July to determine which new province it would join, choosing among Provinces II, III and IV, according to Province II Council lay representative Yvonne O’Neal, who represented her province at the convention. Bishops William Klusmeyer of West Virginia and Gregory Brewer of Central Florida represented Provinces III and IV, respectively.

After presentations from the provinces, the diocesan convention voted to join Province II on the sixth ballot. Province II – “the international Atlantic province,” as it calls itself – consists of the dioceses in the states of New York and New Jersey, Haiti, Cuba, the Virgin Islands and the Convocation of Episcopal Churches in Europe.

Before the Province II synod’s September vote to accept the diocese, Acting President Bishop DeDe Duncan-Probe, bishop of Central New York, invited Puerto Rico Bishop Rafael Morales to address the synod. In his overview of the diocese’s work, Morales “highlighted the diocesan seminary, the funeral and grief counseling program, the new radio station with its many programs … and how this all feeds into social media,” O’Neal wrote. “One of the most notable achievements of the Diocese of Puerto Rico is the St. Luke’s Episcopal Health System, the biggest on the island, [which] has been in operation for more than 100 years.”

“The diocese has income-producing enterprises such as the St. Luke’s Health System,” O’Neal wrote. “Eight years ago, the Diocese of Puerto Rico had an endowment of $26 million amassed by the retiring bishop, an endowment that has grown substantially since then.”

The Diocese of Puerto Rico will present a resolution approving the switch at General Convention scheduled to be held in Baltimore, Maryland, next July. The diocese also plans to celebrate 150 years of Anglicanism on the island next year.