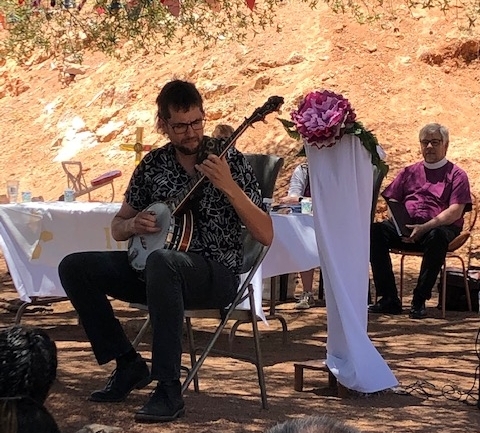 [Episcopal News Service] For folk musician Joe Troop, a 2019 visit to the U.S.-Mexico borderlands opened his eyes to the suffering experienced by migrants trying to enter the United States. Two years later, he returned to Nogales, a border city straddling Arizona and the Mexican state of Sonora, to volunteer at an Episcopal-supported migrant shelter, an experience that inspired him to write a song.

“Mercy for Migrants” – recently featured in Rolling Stone – bears witness to migrants’ suffering and implores listeners to empathize with them. Troop hopes the song, which features banjo virtuosos Béla Fleck and Abigail Washburn and an accompanying video filmed partly at the shelter, will inspire people to learn about the plight migrants face and support the shelter through donations.

La Casa de la Misericordia y de Todas las Naciones, on the Mexican side of Nogales, provides basic short-term housing, food and other services for migrants through an ecumenical partnership of the Episcopal Diocese of Arizona, the local Evangelical Lutheran Church in America diocese and the Southwest Conference of the United Church of Christ, along with the Anglican Church of Mexico’s Diocese of Western Mexico.

“This little migrant shelter is a peaceful link in a very violent chain,” Troop told Episcopal News Service, “and it offers people a moment of gathering their thoughts, processing what they’ve been through.”

Troop, founder of the Grammy-nominated Argentinian-American string band Che Apalache, was first invited to the borderlands by UCC pastor Randy Mayer, whom he met while teaching at an arts camp. Troop and his bandmates walked with Mayer into the Sonoran Desert, where they were deeply moved by the sight of small crosses marking places where migrants had died, he said. The story Troop was told about one cross in particular stuck with him.

“The remains of a 16-year-old kid were found in the desert, right over the hill from this ostentatious American McMansion kind of place, with a swimming pool with water pumped from the Colorado River, ‘Don’t Tread on Me’ iconography, just this horrible juxtaposition,” Troop said. That image was the initial inspiration for “Mercy for Migrants,” Troop explained. He vowed to return, and did earlier this year with a film crew, capturing footage that would be featured in the song’s music video.

Troop stayed at La Casa for a month, volunteering and getting to know the migrants. He was struck by the difficult conditions at the shelter: the intense heat, scorpions and unreliable access to clean water. But he was also impressed by the care that the shelter offered the migrants.

The shelter typically hosts migrants for periods of several months to a year as legal partners help them apply for asylum and find sponsors in the U.S. Many are fleeing widespread violence in other Latin American countries or seeking a livelihood for their families. In July, the U.S. Border Patrol reported almost 200,000 encounters with migrants along the U.S.-Mexico border, the highest monthly total in 21 years.

“It’s a very safe space,” said the Rev. David Chavez, the Diocese of Arizona’s missioner for border ministries. “There’s a lot of conviviality.” During the day, the children have school lessons and playtime, while adults perform tasks suited to their abilities and talents, like cooking or gardening. There are medical and psychological services available, and caseworkers from legal aid partners meet with migrants to help them enter the U.S. legally.

“There’s something important to a rhythm that restores, because of the chaotic stories that we’ve heard of the disconnection,” Chavez told ENS.

By the time migrants arrive at the borderlands, many have endured long and dangerous journeys already, with their lives threatened by the harsh conditions and violent gangs.

Troop saw how La Casa managed to provide comprehensive services with limited resources and wanted to help by lending his voice. The video for “Mercy for Migrants” (which is on his new album “Borrowed Time”) directs viewers to a page on his website that explains what La Casa does and encourages people to donate to the ecumenical ministry that supports it.

“It’s one thing to be moved; it’s another thing to open your wallet and give a little bit of money,” Troop said. “When you donate to a lot of organizations, it’s not vetted, so you don’t know whether they’re going to help, but in this case, I can guarantee it. I know everyone involved in this process. … I see the chain of money, and I know what it’s going to be used for, and I know how much it’s going to mean in people’s lives.”

Chavez said he expects migrants will be staying longer at La Casa because of the “Remain in Mexico” policy instituted by the Trump administration, which forces asylum-seekers to stay in Mexico while their cases progress through the system. The Biden administration has tried to end the policy, but in August the Supreme Court prevented it from doing so.

He’s grateful that Troop is drawing attention to the strife that migrants face and the humanitarian mission of protecting them. 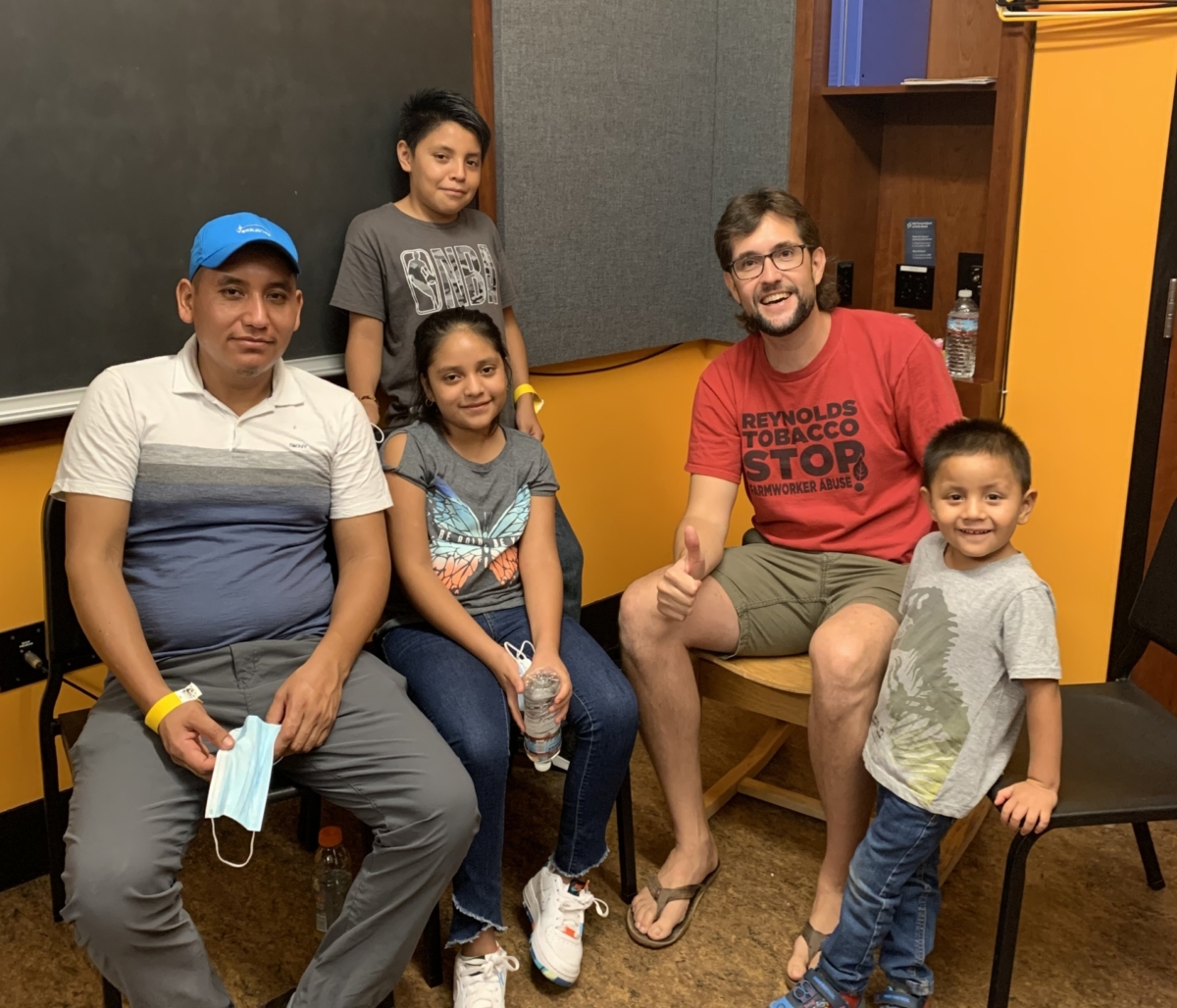 While touring in Chicago in September 2021, Joe Troop reconnected with a migrant family he had met at the shelter in Mexico. The family had obtained asylum in the U.S. and came to Troop’s show in Chicago. Photo courtesy of Joe Troop

“As Joe expressed, we’re hoping to find that space within the larger world so that this story can [help people] think through the plight but also the presence, the giftedness and embrace of our migrant neighbors,” Chavez said.