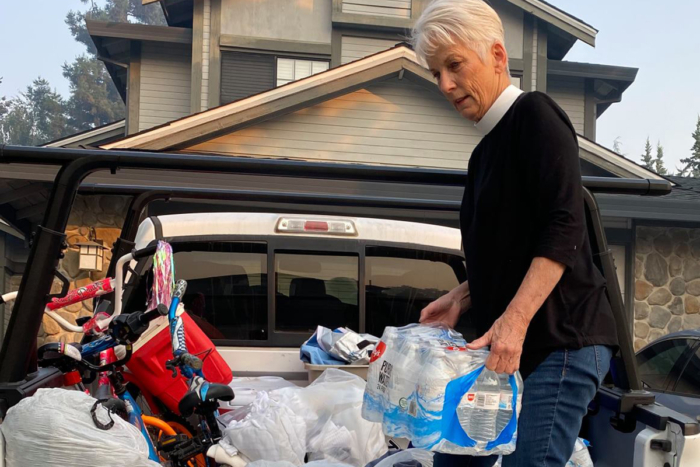 The Rev. Debra Sabino, rector of the Episcopal Church of Our Saviour in Placerville, California, helps unload some of the supplies donated to evacuees who fled the Caldor Fire in Northern California. Photo courtesy of Debra Sabino

[Episcopal News Service] A small team of Episcopal clergy in the Diocese of Northern California spent the past several weeks ministering to some of the people and animals who were forced to flee their homes because of the Caldor Fire near Lake Tahoe. The Episcopalians brought coffee and food, marshaled donations of bikes for children and prayed with evacuees upon request.

They also have helped distribute money and gift cards that were furnished by a disaster relief effort led by the diocese, which announced this week that it had raised more than $11,000 in donations.

The Caldor Fire so far has consumed more than 200,000 acres and destroyed hundreds of structures. This week, emergency officials announced that fire crews had the fire about 50% contained, somewhat easing its threat to communities and homes. The Episcopal outreach continues as some parishioners from the Episcopal Church of Our Saviour in Placerville, who call themselves Team Caldor, are working with diocesan officials on a long-term assistance plan for the most financially vulnerable victims of the fire’s devastation.

“It’s not over yet,” the Rev. Debra Sabino said Sept. 8 as she described to Episcopal News Service some of the ongoing efforts to respond to the wildfires that continue to wreak havoc in Northern California and other parts of the West.

State officials said this week that wildfires had consumed about 2 million acres in California so far this year, and the fire season is expected to drag on, fueled by scorching heat, persistent drought and strong winds. At least a dozen large fires continue to burn in the state. The largest, the Dixie Fire northeast of Chico, has burned more than 900,000 acres.

“In the midst of the anxiety and despair that natural disasters bring, the Diocese of Northern California works hard to provide pastoral support, community, and resources to those in distress,” the diocese says on a page of online resources for disaster preparedness. The page also highlights the support it receives from Episcopal Relief & Development.

“As Christians, we are called to serve the vulnerable in our communities. In a disaster, our vulnerabilities are laid bare before us and our call to serve becomes clearly present,” the diocese says.

“The Diocese of Northern California is experienced at responding to disasters, particularly wildfires,” Katie Mears, senior director of Episcopal Relief & Development’s U.S. Disaster Program, said in a news release. “The staff had prepared in advance so they were able to quickly mobilize to help people affected by this year’s fires.”

Sabino has served for six years as rector at Our Saviour, located a little more than 10 miles west of the edge of the area burned by the Caldor Fire, which ignited on Aug. 14. Placerville was never threatened, though about 10 families from the congregation live in the evacuation zone and had to flee last month. None of those parishioners have lost their homes.

Many evacuees found refuge at a Red Cross shelter in Cameron Park, west of Placerville, with some setting up tents or parking RVs outside the shelter, Sabino said. A Walmart parking lot in Placerville also served as a temporary camp for evacuees.

“It was just chaotic. There were people filing in from everywhere,” she said.

Sabino and the Rev. Tom Gartin, priest-in-charge at Faith Episcopal Church in Cameron Park, prayed outside the Red Cross shelter early in the crisis and then joined with other clergy in the area to assist evacuees. A local Starbucks donated coffee, pastries and sandwiches for the clergy members to take to the people camped out in parking lots. Sabino lent her camper trailer to a nurse who had fled the Caldor Fire with her two dogs.

Sabino also visited D’Agostini Ranch in El Dorado County, which offered accommodations to evacuees, especially those who had fled with horses, livestock and other farm animals. The ranch provided temporary showers and laundry facilities, and volunteers helped distribute donated food to the families.

Sabino put out a call on Facebook for donations of bicycles and received about 20, which she brought to some of the children who were camping at the ranch until they and their families could return home.

Some evacuees asked Sabino to pray with them. Despite being displaced by the fire, “they were just so overwhelmingly positive,” she told ENS.

With conditions improving around Lake Tahoe, some of the evacuation orders are being lifted, and residents are able to return to assess any damage to their homes. The clergy members from Placerville and Cameron Park ended their daily deliveries of coffee and food this week, though they continue to visit people who remain at the shelters.

And with the Caldor Fire still consuming hundreds of acres each day, the smoke remains a health hazard. “The air quality is so bad,” Sabino said. “It’s like driving through a thick fog.”