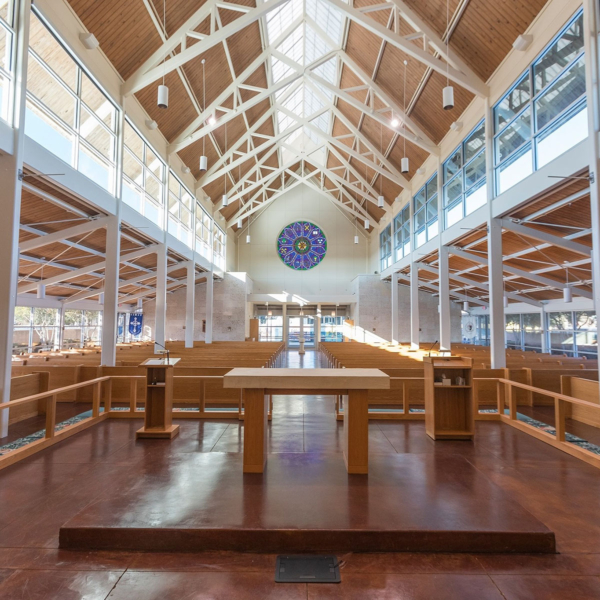 All Saints’ Episcopal Church in Fort Worth is now worshipping at its school. Photo: All Saints’ Facebook page

[Episcopal News Service] One Episcopal congregation started worshipping this summer in a former bank drive-thru in Hillsboro, Texas. In Wichita Falls, Texas, Episcopalians secured space in a Disciples of Christ church so they could continue holding services, now on Saturday evenings instead of Sunday mornings. Members of a congregation in Fort Worth chose to close their church and worship apart, but they continue to keep in touch, including through online prayer services.

It has been four months since six congregations in Texas were evicted from their worship spaces after the former Episcopal Diocese of Fort Worth lost its 12-year legal battle with a breakaway group affiliated with the Anglican Church in North America, or ACNA. The Episcopal diocese has since changed its name to the Episcopal Church of North Texas, and all but one of its evicted congregations have found temporary homes and resumed worship.

“People have been trying to take time to settle and get over the shock that is still reverberating and come to terms with this unimaginable new reality we have found ourselves in,” Katie Sherrod, the diocese’s communications director, told Episcopal News Service. “And at the same time, we know we have to go into some kind of discernment about what we do next.”

Sherrod and other church leaders provided ENS with the following updates on the status of each of the six displaced congregations:

As difficult as it was for St. Mary’s to leave, the congregation of about a dozen worshippers counts itself fortunate for finding a suitable new home, said David Skelton, St. Mary’s senior warden.

Initially, Skelton and other members worshipped in the back room of a real estate business for nearly four months. A friend of Skelton’s had purchased the vacant bank drive-thru with the intention of eventually moving his auto repair shop there. Skelton asked if the shop owner would let the congregation worship in the bank building in the interim if St. Mary’s committed to fixing up the property.

Church members swept and scrubbed the 1,600-square-foot space, replaced old ceiling tiles, resurfaced and sealed floors, repaired Sheetrock and upgraded the air conditioning. The neighboring Diocese of West Texas donated church furniture, as well as altar linens, prayer books and hymnals. The building’s two rooms now serve as a worship space and parish hall in a central location, Skelton told ENS, though the congregation is trying not to focus solely on the physical structure.

St. Mary’s and the other displaced congregations are grateful for the hospitality they have found, but eventually, they will need to find permanent homes, said Sherrod, who is a member of St. Luke’s in the Meadow. “All of our congregations feel the need for a more permanent place for their ongoing ministries, to say nothing about their worship,” she told ENS.

That is especially true as congregations respond to the diocese’s emphasis on “looking outside ourselves” and “focusing on the needs of the communities around us,” Sherrod said. “That has been what has anchored us and kept us all going in the midst of all this.”

Relocating to Texas Wesleyan University is a “stopgap measure” for St. Luke’s in the Meadow and the 4Saints Food Pantry, Sherrod said. The pantry “never missed a day of food distribution” but lost some of its regular clients after the move, partly because the new location isn’t as convenient for public transportation. The congregation’s discernment process will include seeking a new location that can adequately accommodate the church and its ministries.

The diocese lost more than $100 million in diocesan property to ACNA in the court battle, and its membership has dropped from more than 17,000 to fewer than 4,000 since 2008 when the diocese’s leaders persuaded a majority of Episcopalians to leave The Episcopal Church over the ordination of female and LGBTQ+ clergy.

The diocese still has 14 active congregations, but that list no longer includes St. Elisabeth’s and Christ the King Episcopal Church. As the latest ACNA evictions loomed in April, the congregation of about 35 to 40 worshippers decided against looking for a new location.

“We were just too small and not enough energy to start again somewhere else, so we just sort of closed,” said the Rev. Sandi Michels, who had served as priest-in-charge since 2011. She maintains contact with her former congregation by phone and email and invites them to join her for brief Compline services on Zoom three evenings a week. Usually, at least a half dozen former members of the congregation attend.

While the recently displaced congregations consider their long-term options, the diocese’s other nine active congregations have followed a range of paths since 2008.