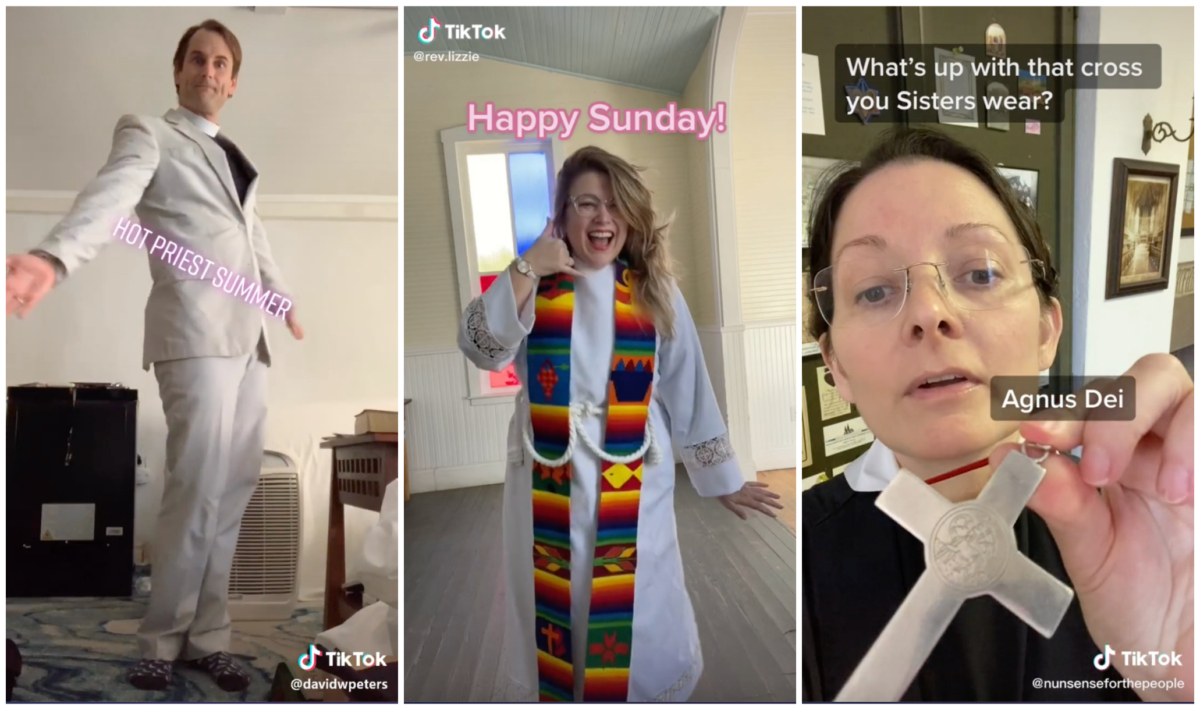 The Rev. David Peters, the Rev. Lizzie McManus-Dail and Sister Monica Clare are a few of the members of Episcopal clergy and religious orders who maintain a presence on TikTok.

[Episcopal News Service] TikTok, the video editing and streaming app on which mostly millennials and Generation Z share funny dance challenges, viral moments and memes, might be the last place you’d expect to find a 45-year-old priest evangelizing. But the Rev. David Peters isn’t your average priest, and his style of evangelism is less about preaching and more about laughter.

“It’s just another way of relating. It’s also the town square,” said Peters, a church planter in Pflugerville, Texas, near Austin. Peters became perhaps the first priest to go viral on the app when his videos – including “Outfits I’m Afraid to Wear” and “Anglican Priest Problems” – unexpectedly took off in the summer of 2019, garnering international media coverage. He and other Episcopal clergy have made a ministry out of providing an affirming alternative to harmful variants of Christianity and explaining what they love about their faith, often through the offbeat language of memes.

Reposting since the sound quit from a copyright. Enjoy my first real TikTok ever! #hotpriestsummer

Peters, who leads a congregation that meets at a wine bar as well as online, wanted to reach more people in his community, especially young people. And since the pandemic, they increasingly gather in virtual spaces like TikTok. A November 2020 survey found that 69% of American teenagers use TikTok at least once a month; a 2021 study found that 48% of 18- to 29-year-olds use it.

“One of the reasons I went on TikTok was I felt a real burden for the teenagers of Pflugerville,” Peters told Episcopal News Service. “Teenagers really do live in a separate universe, and there’s probably good reasons for that. But as a church planter, I’m thinking of every group in my community, how is this church connecting with them?”

Peters had been making videos on other platforms and downloaded TikTok mainly for its ability to easily edit short video clips, “and the minute I did that, I was like, this is brilliant. I discovered that it was a very young community, and really funny, really positive. Joyful things really do well on there.”

Peters is especially concerned with young people’s mental health, and he tackles serious subjects, including his own divorce and mental health struggles, alongside slapstick stunts and pop culture parodies – sometimes in the same video. He points out that he was not the first clergyperson to embrace TikTok as a way to meet young people where they are, but his success has inspired other clergy to take up TikTok ministry.

“I had seen some of his videos and thought, ‘Wow, that’s really charming and such a cool evangelism tool,’” said the Rev. Lizzie McManus-Dail. She is the curate at the Church of the Cross, a new church currently meeting online and at a ranch in Bee Cave, Texas, near Peters in the Austin suburbs. Since downloading the app “in the pandemic doldrums” of April 2020, she has developed a following of her own – nearly 36,000 strong – with her mix of affirmations, prayers, Q&As, social justice and cat antics.

“There was a very clear understanding in my mind that this was something I wanted to do as a deacon and then a priest, and as an extension of ministry,” McManus-Dail, who is in her late 20s, told ENS.

Others, like Sister Monica Clare of the Episcopal Community of St. John Baptist in Mendham, New Jersey, stumbled into TikTok ministry unintentionally. The 55-year-old had never heard of TikTok until a friend encouraged her to get on it. Her account, @nunsenseforthepeople, started with observations of an ornery turkey that stalked the convent grounds. Originally intended just for four close friends, her videos – through the mysterious workings of the TikTok algorithm, or perhaps the Holy Spirit – were suddenly reaching hundreds of thousands of people. Many seemed to be endlessly curious about her life, asking everything from her reasons for joining the convent to her skin care routine.

There are actually a LOT of nuns, monks, and friars on social media. Communities have realized it’s a great way to connect! #nuns #episcopal

She responds with the deadpan humor she has developed over the course of a particularly varied life. She studied acting at New York University and moved to Los Angeles, where she “failed spectacularly” at acting but enjoyed doing improv and stand-up comedy. After a 20-year career designing movie posters and promotional materials, she entered the convent at age 46, but she never lost that sense of humor. For her, life as a nun is full of joy and she wants to share it with the world.

“People really responded to the humor,” she told ENS. “Some of my videos are still, of course, serious. I answer serious questions about The Episcopal Church. But I think people are put at ease when somebody is funny because it makes them more human, and I think the church’s public image has been really devoid of humor.”

McManus-Dail was also drawn to TikTok’s upbeat atmosphere “because I think the church is often perceived as really serious and focused on suffering and feeling bad about ourselves, and that’s not how I encounter God. And 2020 was really hard, and I knew that I needed lighthearted things to get me through the day. And I thought that was something that we could offer.”

Many progressive Episcopalians with ministry on TikTok, including Peters, Sister Monica Clare and McManus-Dail, focus especially on reaching out to LGBTQ+ people and people who have had bad church experiences.

“I wanted to be very clear from the beginning that I’m a queer-affirming clergyperson and that The Episcopal Church welcomes all people,” McManus-Dail said. “To say, ‘Not only are you welcome here, we want you here and you belong here; we’re done with the debate.’ I’m so humbled to hear people’s stories of church harm and moved by their bravery to reach out and say, ‘I still care about Scripture. I still care about God. The church has hurt me, but I’m not done with it.’”

Answering viewers’ questions, especially about sexuality, is also a significant part of their ministry.

Answer to @lisamsaps Let’s look at Acts 8! I’m preaching on this text this week 💖🏳️‍🌈

“People started asking me, ‘Do you think the LGBTQ community is going to hell?’ and they were absolutely shocked when I said The Episcopal Church is fully inclusive of the LGBTQ community,” Sister Monica Clare said. “They just couldn’t believe it. That’s a message that really needs to get out there.”

Other questions range from some of the oldest theological quandaries to more prosaic ones, Sister Monica Clare said, like “How do you do your hair like that?” and “Can Episcopal nuns get married?”

“I have a list of like 30 questions right now,” she said. “Somebody just asked what our cross represents. I’m also trying to throw in a bit of history because a lot of people have no clue what The Episcopal Church is and what we believe.”

“I get a lot of questions about pain,” McManus-Dail said, “about ‘Why does God let me suffer? Why did God let people in the church hurt me?’”

“The one that I think is most common,” Peters said, “is like, ‘My grandfather died’ or ‘I’m going through a breakup’ – not necessarily questions but prayer requests, and to me, that is what the Christian church is really supposed to be doing: being there for people.”

The priest’s vow: “You are to love and serve the people among whom you work, caring alike for young and old, strong and weak, rich and poor.”

All three agree that TikTok ministry is a form of evangelism – though their goal isn’t necessarily to convert their viewers. It doesn’t have to be preachy, Peters said.

“Progressive Christians today, especially Episcopalians, are so terrified of evangelizing our friends and neighbors and family or whoever we encounter, that we keep it a secret,” he said. But viewers want to see simple, sincere depictions of people just doing what they love, or what they’re good at.

“How-to videos on YouTube are, like, the most watched thing,” he said. “People are repairing their sinks with them, and Christianity needs to do that: to show people how we’re doing our faith and not really talk about why they should.”

Lord Jesus Christ, you stretched out your arms on the hard wood of teh cross that EVERYONE might come within the reach of your saving embrace. BCP1979

However, TikTok ministries have brought people into Episcopal churches – at least virtually. Peters’ church now has an active member from Scotland who encountered his TikTok videos and has been attending virtual services since the pandemic started, as well as others who sometimes come to events. In McManus-Dail’s virtual Bible study, about 75% of the participants found her through TikTok or Instagram. Her church also has “a fairly consistent stream” of visitors to virtual and in-person services who found her that way, including about five regular in-person worshippers.

Peters stressed that his goal is not necessarily to get people to come to his services, and he reminds viewers that there is probably an affirming church near them. He recalled when a campus missioner at Texas A&M University told him about a woman who had come out to her evangelical church and had been rejected, but after learning that The Episcopal Church is LGBTQ+-affirming through Peters’ videos, she joined the Episcopal campus community.

Though Peters, McManus-Dail and Sister Monica Clare say TikTok ministry isn’t for everyone, they want others to know that it’s not as difficult as it might seem.

“Be approachable,” Sister Monica Clare advises. “TikTok viewers seem to love a person just talking sincerely into the camera. You don’t have to get too elaborate.”

“I think it’s real simple,” Peters added. “Social media is just stuff that you’re interested in. And if you’re not interested in church and you’re a clergyperson, maybe your church isn’t exciting enough to share! And I’m not saying your church should be exciting, but the Gospel should be.”