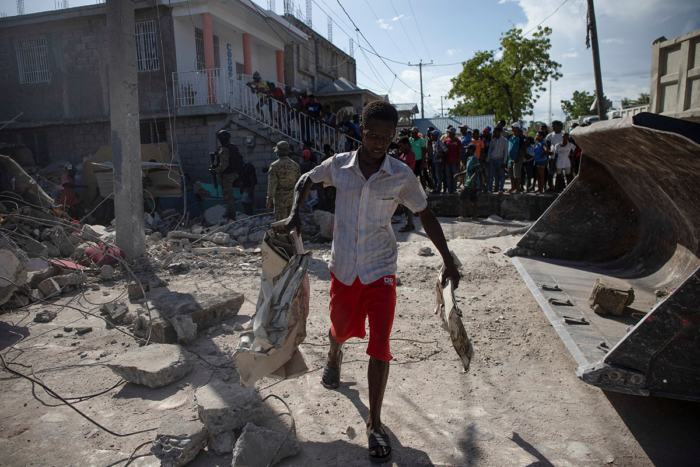 A man removes debris from a house the day after a 7.2 magnitude earthquake struck in Les Cayes, Haiti, Aug. 14, 2021. Photo: Estailove St-Val/Reuters

Editor’s note: This story was updated on Aug. 17.

[Episcopal News Service] Haitian Episcopalians have spent the hours since the Aug. 14 7.2 magnitude earthquake searching for family and friends while assessing the damage to their churches, schools and communities as their ministry partners across The Episcopal Church have anxiously awaited their news.

The death toll from the earthquake stood at close to 1,410 the morning of Aug. 17, Haiti’s Civil Protection Agency said via Twitter. The agency said 6,900 people had been injured. Amid the devastation, Tropical Storm Grace has moved off the coast of Haiti but is still drenching the quake-hit area, with up to 15 inches of rain expected in some places.

Amid the devastation, Tropical Storm Grace, now downgraded to a tropical depression, was expected to bring heavy rainfall over the island on Aug. 16, potentially causing flash flooding and mudslides into Aug.17.

After the quake “the streets are filled with screaming,” the Rev. Abiade Lozama, archdeacon at Saint Sauveur Episcopal Church in Les Cayes near the quake’s epicenter, told the New York Times Aug. 14. “People are searching, for loved ones or resources, medical help, water.”

He and others were welcoming teachers and parents on Saturday morning to discuss plans to return to school when the earthquake occurred. Everyone ran outside, looking for an open space free of trees or buildings that could collapse. Lozama said he walked from the school to the town center and saw only a handful of houses that did not have damage.

The quake struck at 8:29 a.m. Eastern time 5 miles from the town of Petit Trou de Nippes on the country’s southwest peninsula, and 78 miles west of the Haitian capital of Port-au-Prince. Shocks were felt as far away as 200 miles in Jamaica, according to the United States Geological Survey.

“People are sitting around waiting for word, and there is no word — no word from their family, no word on who will help them,” Lozama told the Times. “When such a catastrophe happens, people wait for word or some sort of confidence from the state. But there’s nothing. No help.”

“We know that lives have been lost and many buildings destroyed,” Elizabeth Lowell, a member of the board of St. Vincent’s Center for Children with Disabilities in Haiti, wrote to supporters on Aug. 14. “Episcopal clergy in the affected area are safe, but shaken.”

Among those shaken clergy members, Lowell told Episcopal News Service, is the Rev. Kesner Ajax, known to many Episcopal congregations and schools as the coordinator of partnership efforts between the Diocese of Haiti and Episcopalians elsewhere in the church. Ajax lives in Les Cayes. ENS received an email from him on Aug. 15 promising details of his experience as soon as possible.

The Episcopal Diocese of Haiti is numerically the church’s largest, with 92,651 members as of 2019, the latest year for which parochial report statistics are available. The diocese grew nearly 11% between 2009 and 2019.

Episcopalians are preparing to help in Haiti as best they can.

“We are deeply saddened by the reports coming from our friends and partners in Haiti,” Abagail Nelson, executive vice president of Episcopal Relief & Development, said in a statement posted on the organization’s website. “We pray for their safety as Tropical Storm Grace approaches the country. We are currently mobilizing to work with an array of development partners to meet the immediate and long-term needs of affected communities.”

“Our hearts break for our brothers and sisters in Haiti. So many of us have visited Haiti and been blessed by her faith and resilience,” Atlanta Bishop Robert C. Wright said in an Aug. 15 press release. He also acknowledged that many Georgia Episcopalians have long-standing personal and ministry relationships with the people of Haiti. “We pray God’s grace and mercy on her now as she faces the tremendous trials of another earthquake and continued political upheaval. May God have mercy on the nation and people of Haiti.”

News from other Episcopal organizations and partners in the quake-struck part of the country is trickling out to partners in the United States. The Global Birthing Home Foundation, based in Kansas, reported Aug. 14 that the perimeter wall at Maison de Naissance had collapsed, taking down the power lines from its generator building. However, its solar power system appeared to be intact. The foundation of the main building is badly damaged, and the interior cannot be assessed due to the danger of collapse. The diocese and St. Vincent’s Center are among Global Birthing Home Foundation’s partners.

Ajx told ENS via email that he is  staying in a tent until the aftershocks are over. “The most shocking thing is to see people under the sun during the day and in the evening under the rain,” he wrote, adding that it was worse the night of April 16 as Grace passed over Haiti.

In Maniche, about 14 miles north of Les Cayes, the 400-student school at St. Augustin Episcopal Church sustained significant damage, according to a Facebook post by the congregation’s ministry partner, St. Andrew’s Episcopal Church in Kansas City, Missouri. The two congregations, along with three other Episcopal parishes in the Kansas City area, have been partners for 25 years.

In Petit Trou de Nippes, near the quake’s epicenter, St. Peter’s School has suffered major damage, according to a report by Locally Haiti, formerly known at the Colorado Haiti Project. Many people are sleeping outside and the Episcopal Church-related group spent the days since the quake learning what their ministry partners need.

“As always we will rely on our long-term relationships and local leaders in Haiti, listening first, and then marshaling resources to help,” Locally Haiti said in an Aug.15 Facebook post.

Those needs are now more clear, the group said. “We are working to secure requested items (medical supplies and tents for the clinic, for the school, and for families),” the group said Aug. 17.  “The logistics are challenging and Tropical Storm Grace will not help. We are communicating with multiple organizations in Haiti to assure we are coordinating efficiently.” Locally Haiti said it also plans to send financial aid and a structural engineer to assess the state of the ministry’s buildings.

Dr. Paul Farmer, one of the founders of Partners In Health, said Aug. 14 that Zanmi Lasante, an organization based in Cange in the central plateau and Haiti’s largest health care provider outside the government, “will be able to muster both hospital beds and outreach teams, and already has a cracker-jack trauma team.”

Zanmi Lasante has Episcopal Church roots. The Rev. Fritz Lafontant, 94, a veritable icon of the diocese who succumbed to COVID-19 on June 28, was another founding member of Partners in Health and was Zanmi Lasante’s founding director.

Farmer noted that after the devastating 2010 earthquake struck near Port-au-Prince, Zanmi Lasante had teams in the quake zone within 24-48 hours. “They can do more, and faster, than back then, and will be counting on all of us for the pragmatic solidarity they deserve,” Farmer wrote. “That will be, as usual, in the form of staff, stuff, space, and support, since we now have Haiti’s biggest and strongest health system, much of it mobile when needed. Of course, they are already dealing with COVID and political disruption, but we have the US Coordination team on standby too.”

Haiti, plagued by decades of poverty and political violence, has not fully recovered from the 2010 magnitude 7 earthquake that struck 10 miles southwest of the capital, Port-au-Prince. Somewhere between 220,000 and 300,000 people were killed. About 3 million people lived in the capital at the time, and 1.6 million people in the city and elsewhere were left homeless on streets filled with the rubble of 80,000 destroyed buildings.

The latest earthquake hit a country suffering from an uptick in COVID-19 cases, ever-increasing gang violence and the July 7 assassination of President Jovenel Moïse. The Times reported that the gangs that control the highway linking the southern peninsula to the rest of Haiti declared a truce for humanitarian reasons the evening of Aug. 14, allowing aid to flow to devastated areas and alleviating concerns that trucks delivering the supplies would be held up and looted.

The country had seemingly avoided the worst of the pandemic until recently. Johns Hopkins University’s COVID-19 tracker shows 20,507 confirmed cases and 576 deaths as of Aug. 16. However, health experts say that those numbers are major undercounts. Haiti received its first vaccine shipment on July 14.

In addition to Lafontant, the Rev. Lucien Bernard and the Rev. Robert Joseph, the rector and vice-rector of the Episcopal University of Haiti, respectively, both died of COVID-19 days apart in early June.

The country’s violence and the pandemic have prevented the diocese from electing a new bishop to succeed the Rt. Rev. Jean Zaché Duracin, who retired March 1, 2019. The Very Rev. Joseph Kerwin Delicat, dean of Holy Trinity Cathedral, was elected bishop coadjutor in June 2018; however, the validity of the election was challenged. Delicat eventually failed to receive the necessary consents from The Episcopal Church’s dioceses and bishops.

Bishop Todd Ousley, who heads the church’s Office of Pastoral Development that assists dioceses with bishop searches, told ENS in July that Haiti has not been able to schedule a new election because of the pandemic, government instability and civil unrest, and the challenges of power outages and lack of reliable internet or other communication mechanisms.