[Episcopal News Service] The bishop’s message landed in Vermont Episcopalians’ email inboxes last month with a hopeful subject: “Building a Bridge to the Future.” But the bottom line was dire: The Diocese of Vermont is heading toward a “financial cliff,” an expert had concluded, and budget cuts alone won’t prevent the fall.

“Cost-cutting is only a short-term survival strategy that will help us build a bridge to our new future,” Bishop Shannon MacVean-Brown said in her July 21 message. She also announced a new task force that will consider long-term strategies for sustaining the diocese’s congregations and ministries, and she raised the prospect of greater collaboration and resource sharing with the dioceses of New Hampshire and Maine. “While I know this news may come as a surprise to some of you, the challenges to the financial sustainability of our ministry were decades in the making, and we will not solve them overnight,” she wrote. 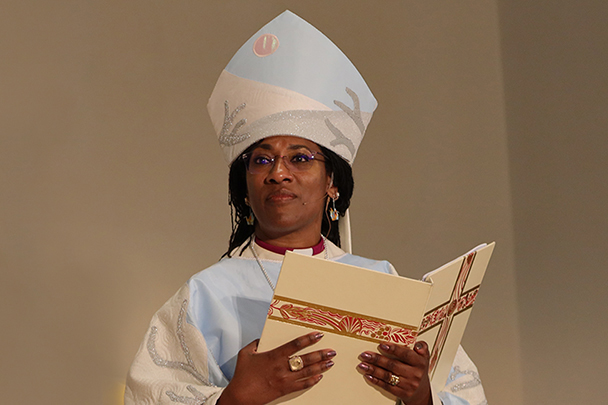 MacVean-Brown later said in a phone interview with Episcopal News Service that there had been no talk of merger with any other diocese, but she felt compelled by the assessment of her diocese’s finances to speak frankly about the urgent need for a different path forward. The challenges facing her diocese are similar across The Episcopal Church, she said, and she remains hopeful.

“This is about the mission of Jesus. What would Jesus have us do in this time, and how can we use all of our resources to be about that work?” MacVean-Brown told ENS. “I don’t know the outcome. … I just know that we are going to talk about the realities and do something new, and that we’re going to trust God to be with us in it.”

Vermont’s newly formed Taskforce for Hope, Revitalization, Innovation, Vitality and Efficiency, or THRIVE, will study the organizational models being tested by other Episcopal dioceses. In particular, MacVean-Brown pointed to the ongoing partnership between the dioceses of Northwestern Pennsylvania and Western New York. Bishop Sean Rowe, who oversees those two dioceses, spoke to the Diocese of Vermont’s new task force during its first meeting on July 26. MacVean-Brown has begun discussing options with the bishops in New Hampshire and Maine.

MacVean-Brown has led the Burlington-based diocese since September 2019. Her predecessor, the Rt. Rev. Thomas Ely, was bishop for 18 years, following what the diocese described as a “bishop in partnership” model that sought to empower local leaders.

“This is more than just a money thing,” MacVean-Brown said. “It’s much bigger than that. It goes back decades.”

The Vermont diocese is one of the smallest in The Episcopal Church, with about 5,700 baptized members in 2019, according to the most recently released church data. It has 10 full-time clergy members and 45 congregations. Diocesan records indicate most congregations operate without full-time clergy, and all but three report average Sunday attendance of less than 100 worshippers.

The state, mostly rural, has 624,000 residents, fewer than every other state except Wyoming, and 94% of Vermonters are white, according to the U.S. Census Bureau. Residents ages 65 and older make up 20% of Vermont’s population, and MacVean-Brown, the diocese’s first Black bishop, noted to ENS that many of the church’s members are older adults.

Vermont’s membership trend mirrors those regionally and in the wider Episcopal Church, which recorded an 8% membership decline from 2014 to 2019. Vermont is part of the church’s Province I, which encompasses the seven New England dioceses, and those dioceses averaged a 12% decline in members over the last five years. Connecticut, Maine, Vermont and Western Massachusetts saw plate and pledge income drop 3% to 7% in those five years, while Massachusetts, New Hampshire and Rhode Island logged five-year increases of 4% to 8%.

Financial struggles are still an uncomfortable subject in The Episcopal Church, MacVean-Brown said, and the church’s polity isn’t a reliable guide. “It doesn’t say anything about what happens when a diocese can’t support itself financially, so there’s this expectation that it’s not going to happen,” she said. “And I think that because we haven’t talked about that, it’s undiscussable.”

The Diocese of Vermont’s membership declined by about 13% in the five years ending 2019. While its budget has hovered around $1 million in recent years, its plate and pledge income has gradually declined by more than 3% since 2014, creating an unsustainable long-term budget deficit, according to the financial consultant the diocese hired this year to examine its financial outlook more closely. For now, the diocese says it is holding its finances steady with help from federal pandemic relief through the Paycheck Protection Program, but the financial consultant concluded that by the first quarter of 2023, “diocesan expenses will far exceed revenues.”

MacVean-Brown anticipated the verdict. When she applied for this role in 2018, the diocese said in its bishop search profile it planned to maintain its existing leadership model but also hinted at financial struggles and suggested that much would be expected of Vermont’s new bishop. “We are on the unavoidable cusp of some important and daunting leaps of faith that will call for careful tending, creative ideas and the willingness to hold onto each other in love,” the diocese said in the introduction to its search profile.

In the “Bishop We Seek” section of the profile, diocesan leaders said they had considered other leadership options, such as a part-time or provisional bishop or sharing a bishop with another diocese, but they ultimately chose to recruit another full-time bishop.

“We recognize that our next bishop needs to have an innovative spirit, out-of-the-box energy and, as one person so aptly termed it, a sense of holy scrappiness,” the diocese said. “We don’t know what the finances will continue to look like down the road and what other creative structure of episcopacy might reveal itself in the future.”

In her interview with ENS, MacVean-Brown said such cautionary language had caught her attention, and while she embraced the opportunity to lead the diocese, she thought it was important to face the tough financial realities with honesty and openness.

“I’m not some money whiz,” she said, but about a year ago she took a closer look at diocesan finances and saw a crisis point looming. Up to that point, she said, the dire financial outlook had been obscured by layers of diocesan bureaucracy, including numerous finance-related committees. To get an expert’s opinion, she signed a contract in early 2021 with Stephen Burnett, a former partner at the professional services company Deloitte who had chaired the Diocese of Atlanta’s finance committee for 27 years.

Burnett’s assessment confirmed “trouble ahead” for the diocese. Following his recommendations, the bishop and other diocesan leaders moved to restrict spending as a preliminary measure, including declining to fill a vacant staff position.

In the past, the diocese had made cuts to balance the budget, only to continue facing the need for more cuts, MacVean-Brown told ENS. She had to look for new ways of supporting clergy, developing lay leadership and growing Episcopal ministries, while rethinking the organizational and financial strategies of the past. Simply “managing decline” won’t work, she said. “It decreases our ability to be present in our communities in meaningful ways.”

The partnership between the dioceses of Northwestern Pennsylvania and Western New York is one model for innovation. Since 2018, they have shared a bishop, combined administrative functions and pursued joint ministries. The dioceses of Eastern and Western Michigan established a similar partnership in 2019, and in Wisconsin, the dioceses of Eau Claire and Fond du Lac are in the early stages of expanding their collaborative efforts while sharing a bishop. Another example is the Diocese of Western Kansas, where the Rt. Rev. Mark Cowell has served as bishop since December 2018 while also retaining some of his parish priest duties.

MacVean-Brown has begun talking regularly with New Hampshire Bishop Robert Hirschfeld and Maine Bishop Thomas Brown about ways their dioceses can work together more closely. Options she cited include sharing staff and collaborating on ministries across the region, while allowing each diocese to retain its own identity. Although New Hampshire and Maine resemble Vermont demographically, each state has twice as many residents as Vermont and twice as many Episcopalians – about 11,000 in each of the two dioceses.

At the same, the Diocese of Vermont is proud of its recent achievements, the bishop said. Early in the pandemic, a few dozen Episcopalians who had been meeting regularly to pray on Zoom established a new online congregation they call the Green Mountain Online Abbey. Separately, about 40 people signed up for a lay preaching course offered by the diocese this year. The diocese recently received a grant from The Episcopal Church to support a ministry in Killington that works with a local Indigenous community. And MacVean-Brown praised members of the diocese for confronting the uncomfortable subject of the pro-slavery views of diocese’s first bishop, the Rt. Rev. John Henry Hopkins.

She takes heart in the story in Matthew 14 of Jesus calling Peter from the boat to walk to him on the water, despite the likelihood that he would drown. “He had to make a conscious effort to get himself out of the boat in the storm,” MacVean-Brown said, suggesting that faith will carry the church forward as well.

“Instead of staying in that boat out of fear, he got out to go toward Jesus, so that’s what we’re going to do.”

– David Paulsen is an editor and reporter for Episcopal News Service. He can be reached at dpaulsen@episcopalchurch.org. Egan Millard contributed to this story.