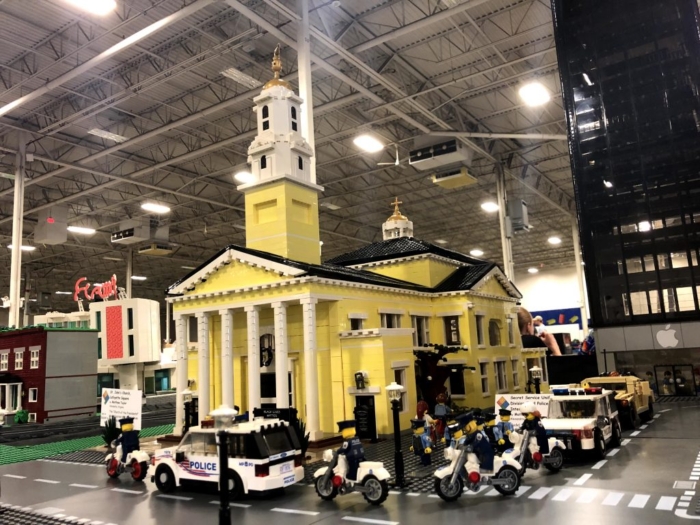 [Episcopal News Service] In Matthew Taylor’s imagination, the historic church in Washington, D.C., that sits across Lafayette Square from the White House is 144 “studs” long (about 45 inches). It is 15 inches wide, rises about 2 feet from its base and is made from as many as 5,000 bricks, many of them purchased online from after-market sellers around the country and the world.

The parishioners who worship in this version of St. John’s Episcopal Church are made of plastic and, whether sitting or standing, are only the size of a thumb. Even so, this yearlong project was an outsized achievement for Taylor.

“This is the biggest Lego model I’ve ever built,” Taylor, 31, said when Episcopal News Service reached him by phone to assemble the story behind his scale model of St. John’s. With the model mostly complete, Taylor showed it off last week at the annual BrickFair expo in Arlington, Virginia, alongside his Lego model of Christ Church in Alexandria, where he now lives. The Lego St. John’s caught the eye of CNN’s Jake Tapper, who posted a photo of it to Twitter during a family visit to BrickFair.

The first brick, or cornerstone, of the real-life, full-size version was set in 1815. St. John’s now is best known as “the church of the presidents” because of the occasional visits made by the sitting commander in chief. Last year, it was the backdrop to the large Black Lives Matter protests that occupied Lafayette Square. During those protests, the church sustained minor damage from vandalism, and the site became a focal point for outrage directed at then-President Donald Trump for posing for a photo outside St. John’s after police had forcibly cleared protesters from the square. 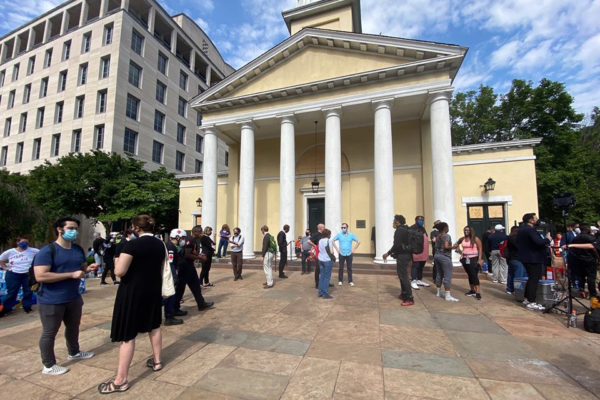 Episcopalians in the Diocese of Washington gather outside St. John’s Episcopal Church, Lafayette Square, on June 2, 2020, to support protesters calling for justice after the killing of George Floyd. Photo: St. John’s via Facebook

Taylor’s model of St. John’s includes Lego versions of the police officers and police vehicles that now regularly patrol outside the church, but he said he didn’t set out to make a political statement. A more central goal in his design was detailed authenticity, and in that, Taylor’s biggest hurdle was getting the color right.

“I think it’s probably one of the few churches or few buildings that are that sort of pale yellow. It’s super distinctive in D.C.,” Taylor said. The color is also rare in the Lego world. The Denmark-based toy company has produced 6,233 different brick shapes in its standard yellow, Taylor said, but only 363 in the “cool yellow” he needed for his St. John’s model.

That still may sound like a lot of shapes, but for a Lego builder, an accurate architectural rendering can depend on finding the perfect brick. Taylor, for example, was having trouble with some of the church’s arches and angles until Lego released a Fiat 500 car kit that included some of the yellow shapes he was looking for. Most other bricks were mined from Lego’s “Friends” series, with its heavy reliance on pastels. 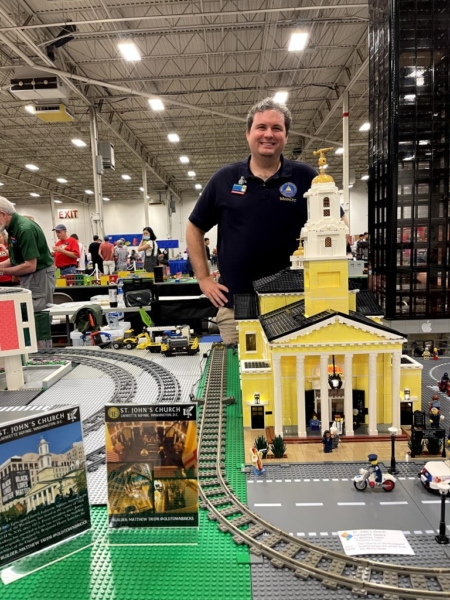 Matthew Taylor, a parishioner at St. John’s Episcopal Church, spent about a year designing and assembling his model of the church with up to 5,000 Lego bricks. Photo courtesy of Matthew Taylor

The model captures other key features of St. John’s, from its six street-facing white columns to subtle details of the interior, such as the pulpit, pipe organs and chandelier. Taylor started the build last August, while the pandemic still was preventing the congregation from gathering for worship inside the church, so he conducted much of his research on interior details using online resources, such as the Historic American Buildings Survey.

“Now that we’re back in the church, I’ve been able to take pictures of things,” Taylor said. He began noticing details that previously had escaped his attention, like a big brass cross positioned in the balcony. The model took about a year to build and revise, and he’s still adding some finishing touches. Only half of the pews are installed.

“Building sort of happens in fits and spurts because of shipping delays,” he said. “It’s been really rewarding to see it all come together.”

Taylor began attending worship services at St. John’s nearly a decade ago while earning his law degree from Georgetown University. The church “was a real place to find solace and peace,” away from the grind of law school, Taylor said, and he continues to be a member of the congregation.

He has only the haziest memory of assembling his first Lego set, but he was about 3, and he thinks it was a space police theme. As he grew older, he was drawn to Lego Star Wars kits and once won “best in show” at an arts and crafts expo for teenagers at the state fair in Tennessee, where he grew up.

He mostly left the hobby behind when he went to college. By then, he also had stopped attending the Church of Christ services of his childhood and instead was worshipping in a United Methodist church in Nashville. After moving to Washington in 2012 to begin his law studies, he began attending services at St. John’s and was confirmed as an Episcopalian in 2014.

He graduated from law school in 2015 and began working for the federal government, now specializing in veterans law. He also started getting back into Legos.

Two years ago, his faith and his hobby intersected at Washington National Cathedral. As part of the cathedral’s ongoing fundraiser, he volunteered to help paying visitors build segments of a growing Lego model of the Gothic structure, which he now calls the “big Lego cousin” to his St. John’s model. 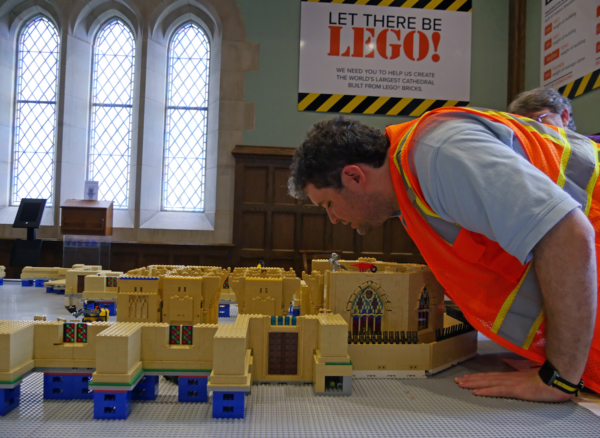 Volunteer Matthew Taylor, a lawyer who attends St. John’s Episcopal Church Lafayette Square across from the White House, checks out the inside of the Lego model of Washington National Cathedral’s Bethlehem Chapel in 2019. Photo: Mary Frances Schjonberg/Episcopal News Service

When finished, the National Cathedral model will incorporate an estimated 500,000 Lego bricks. Only about 100,000 have been assembled so far. The project “has been in a bit of suspended animation” during the pandemic, spokesman Kevin Eckstrom told ENS, but the cathedral hopes to reopen to visitors in the fall and let Lego builders resume their work.

Taylor’s Lego projects don’t come close to the scale of the cathedral’s build, and his first stab at a Lego St. John’s was even smaller. A few years ago, he created a tiny rendition of the church as a gift for a fellow student in his Education for Ministry class who was moving to Minnesota.

That got him thinking about expanding the design to what Lego fans call minifigure scale – the size proportionally fit for a Lego minifigure, or something in the range of 1:35 to 1:48. The scale isn’t exact because “a Lego minifig has much different proportions than a human does,” Taylor explained.

Although the Lego St. John’s took Taylor about a year to build, it wasn’t constant labor. With a design, bricks and instructions in hand, he figures he now would be able to rebuild the same model during a long weekend of clicking bricks together.

He has shared photos of the model in progress with the clergy at the church, as well as on Facebook, and he recently posted a gallery from the BrickFair to his personal blog. The model has not yet made an appearance inside the church it is modeled after, but Taylor hopes someday to display it at St. John’s for the whole congregation to see.

“I hope that they enjoy seeing it as much as I enjoyed building it,” he said.