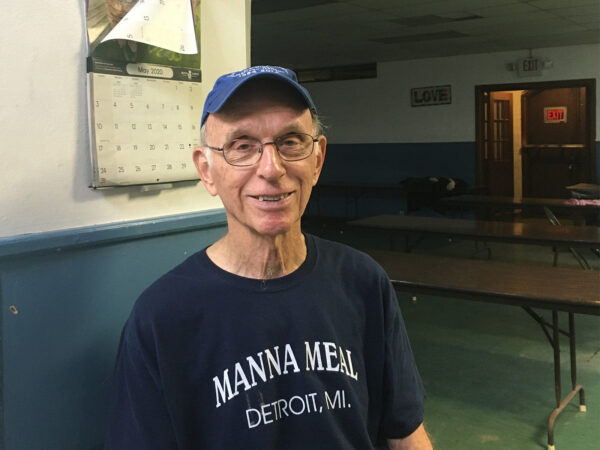 The Rev. Tom Lumpkin poses in the basement of St. Peter’s Episcopal Church in Detroit on July 30, 2021. Photo: Renée Roden/RNS

[Religion News Service] Early on a Friday morning, men and women walk, drive or ride electric scooters to the parking lot of St. Peter’s Episcopal Church in Detroit’s Corktown neighborhood. For the past 45 years, they could count on finding the Rev. Tom Lumpkin there, from 8 to 9 every morning except Thursday and Sunday, serving hot coffee and breakfast items, passing out lunches.

On a recent morning in July, the indoor dining room was closed, as it has been since the start of the pandemic. But volunteers passed out bags of sandwiches and coffee or tea in Styrofoam vessels somewhere between a cup and bowl. The line serves around 50 people each morning, providing them with lunch for the rest of their day.

In partnership with a local church, Lumpkin and three companions founded the Manna Meal soup kitchen in 1976, launching their Catholic Worker community.

The Catholic Worker Movement, founded in 1933 by Dorothy Day and Peter Maurin — two committed Catholics: one a journalist and one a scholar — was an attempt to answer the question as old as Christianity: How can the Christian believer live justly in society?

“My claim to fame is that I’m the only diocesan priest in the world who has as his diocesan assignment the Catholic Worker Movement,” said Lumpkin, who was assigned to a Catholic Worker house by his bishop.

Lumpkin first encountered the Catholic Worker Movement during his years in seminary, when he heard Day speak at a conference.

Lumpkin said his calling to work with the poor began soon after, when he was traveling through Europe as a young seminarian. He was sent to the University of Louvain in Belgium to continue his theological studies from 1960 to ’64. The seminarians were encouraged to travel during their breaks. Lumpkin said he saw the continent still struggling with the aftermath of World War II.

“It was my first exposure to poverty. I was in Naples and saw people living in refrigerator boxes. I saw homeless people,” he said.

Lumpkin was so impacted by the experience he said he spent his final year of seminary measuring his food intake.

When Lumpkin was ordained, he was assigned to suburban parishes for nine years. But he felt restless.

“I began to feel like I was in danger of becoming too settled in my life as a priest and becoming too comfortable in my lifestyle,” Lumpkin said. He felt called to be closer to the sort of poverty he witnessed in Europe. He asked to be transferred from the suburbs to an urban parish. But even there, he wasn’t at peace.

In the early ’70s, a friend told him, “You know, what you’re looking for is the Catholic Worker Movement.” Lumpkin said that in response, a light turned on inside him.

And so, after rounding up a critical mass of interested folks, he and three companions opened a house of hospitality in the Corktown neighborhood. A previous Catholic Worker community had operated in the neighborhood from the late 1930s to the mid-1960s. Lumpkin’s community opened their soup kitchen at Most Holy Trinity Church in 1976 and moved up the road to St. Peter’s soon after.

Lumpkin and his fellow original workers traveled out west to visit a dozen houses of hospitality from Chicago to Los Angeles to discern how they were going to create their own Catholic Worker community in Motor City. “A lot of the practical questions that we needed answers to, that you couldn’t find in a book on the Catholic Worker, we answered ourselves.”

The next year, they pooled together $600 apiece to buy a rambling 16-bedroom house on Trumbull Avenue for $2,400. Lumpkin received permission from Detroit’s archbishop, Cardinal John Dearden, to work at Day house as his full-time pastoral assignment for one year. But Lumpkin was told one more year was all he would get.

Feeling the anxiety of a nascent priest shortage, Dearden gave Lumpkin one year to choose a new parish. Lumpkin took a period of discernment and concluded it wasn’t the place that mattered but the proximity to the poor.

“If I could find a parish that would take in homeless people in the rectory, it would still work,’ he said. “That was part of the philosophy of the Catholic Worker, that parishes should have more involvement with the poor.”

But before Lumpkin’s year was up, Dearden retired and the search for his replacement dragged out. Thomas Gumbleton, an auxiliary bishop in Detroit who oversaw Lumpkin, told him to just stay at the Worker home for the time being.

“When the new archbishop finally came, Gumbleton never told him about this requirement that I had to go back to a parish,” Lumpkin said. “So, I just kept doing it for 40 years. It worked out great.” During that time he also served as a chaplain at Wayne County Jail.

For most of the 2010s, Lumpkin lived as the sole Worker in Day House with about a dozen guests. “There are just a very few people who make this their life vocation. Most people that come stay for a few years and then move on,” he said.

But, he said, he was never lonely. Sunday Masses were always well-attended, and volunteers would drop by often to help.

In 2019, Lumpkin handed over the house bank account and day-to-day operations to two young women who had been closely affiliated with the movement and wanted to move in.

“There are a hundred different ways you can run a Catholic Worker,” Lumpkin said. He decided to let the next generation chart their own way and to move out. Now in his 80s, Lumpkin said not answering the door to knocks at midnight is a relief.

He lives just a few miles away, renting an apartment from the co-manager of Manna Meal, Marianne Arbogast. He’s seen the neighborhood around the soup kitchen change a lot since the Workers chose to set up shop in Corktown. “Little did we think it would be the gentrified area of Detroit right now,” Lumpkin said with a laugh.

The two lots next to St. Peter’s have recently been bought by developers to put up condos. “It’s nonstop,” Lumpkin said. The church bears a sign proclaiming “Not for Sale,” in response to the rapid developments of the neighborhood.

“That’s their way of saying, we’re not just going to sell this to the developers. We’re going to stay here for the homeless people,” said Lumpkin.

When reflecting on what he’s learned from over four decades living in solidarity with Detroit’s homeless, Lumpkin said it has prompted him to confront his shortcomings.

“Living with people who have lots of problems helped me see my own dark side,” said Lumpkin. And, he observed, to identify the role privilege plays in morality.

“We may be tempted to do something illegal or immoral, but we don’t do it. Not necessarily because we’re just so virtuous, but because we were afraid it might screw up our life. We’ve got a future. Thinking we have a future keeps us out of a lot of trouble,” said Lumpkin. A person on the street who feels hopeless, or helpless, or doesn’t see themselves going anywhere, doesn’t suffer from lack of virtue, Lumpkin said, but the guardrails the sense of a future gives us.

“Living in a Catholic Worker house can make you feel really bad about yourself,” Lumpkin said, “because you will see a lot of your failings.”

For him, the chief lesson of a half a lifetime in the Catholic Worker Movement was learning to see love as something beyond agreeableness. You learn to find God, he said, in people who aren’t loving because they have grown up without love. And although he’s left Day House, those lessons are still present, he said.

“You never retire from your Christian vocation. You can always be a force for good.”