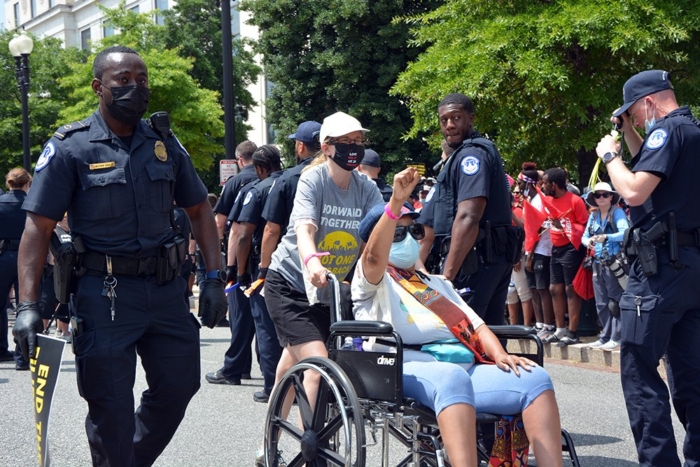 Two activists, one of them in a wheelchair, submit to arrest by U.S. Capitol Police on Aug. 2 in Washington, D.C., during a demonstration organized by the Poor People’s Campaign. Photo: Jack Jenkins/Religion News Service

[Episcopal News Service] Several Episcopal clergy and lay leaders were among more than 200 demonstrators who were arrested and detained Aug. 2 in Washington, D.C., while rallying with the Poor People’s Campaign in favor of legislation that would benefit disenfranchised voters and low-income Americans.

More than 1,000 people reportedly participated in a morning rally outside Union Station. In the afternoon, they marched to Capitol Hill, where they were met by U.S. Capitol Police officers. Some of the participants demonstrated in the street, wearing armbands that identified them as trained in nonviolent direct action and willing to be arrested. After police gave them three warnings to clear the street, the arrests began.

“This is the seat of power for the United States, so we need to raise these issues. We need to amplify the voices of people, 140 million people who are poor and low income,” the Rev. Carolyn Foster told Episcopal News Service by phone while she waited for officers to process her arrest and issue her a citation for blocking the street.

Foster, a deacon in the Diocese of Alabama, works for the social service agency Greater Birmingham Ministries and serves as one of the three Poor People’s Campaign chairs in the state. She and the hundreds of other demonstrators converged in the nation’s capital to raise four demands: end the Senate filibuster, pass new voting protections, fully restore protections included in the Voting Rights Act of 1965 and raise the federal minimum wage to $15 an hour. “When you lift from the bottom, everybody rises,” Foster said.

1 End the filibuster
2 Pass all provisions of the For the People Act
3 Fully restore the 1965 Voting Rights Act
4 Raise the federal minimum wage to $15/hr pic.twitter.com/h1hJtLLsIy

The church’s Office of Reconciliation, Justice and Creation convened an online meeting last week with Episcopalians interested in engaging more with these issues and the Poor People’s Campaign. “While no piece of legislation is perfect, we commit to speak out in support of ways federal and state advocacy can help us live into our biblical vision of Beloved Community,” said the Rev. Melanie Mullen, the office’s director.

Mullen, who was among those arrested, summarized her experiences in an email to ENS, saying she was moved by the stories shared by low-income workers from as far away as Arizona. The march “was just the latest in a long line of Episcopal advocacy to lift all in the face of economic vulnerability.”

Bishop William Barber II, co-chair of the Poor People’s Campaign and president of the nonprofit advocacy organization Repairers of the Breach, underscored the campaign’s demands in a speech to the crowd outside Union Station before the march. “Filibuster is a sin,” Barber said, according to a Religion News Service report, referring to a procedural hurdle that has stymied progressive efforts to pass legislation. “Making essential workers work during a pandemic — and risk their lives to save this country — and then not give them a living wage is sin.” The federal minimum wage has been $7.25 since 2009, though 30 states have set higher minimums for their workers.

Several of the demands coincide with the advocacy pursued on behalf of The Episcopal Church by its Washington-based Office of Government Relations. General Convention, for example, passed a resolution in 2018 opposing voter suppression, and the Office of Government Relations’ Episcopal Public Policy Network has encouraged Episcopalians to call on Congress to pass the voting protections contained in the proposed For the People Act.

Silent March. As far as we can see. Very powerful witness. #whichsideareyouon pic.twitter.com/TfNuA5teBq

Barber and his fellow co-chair, the Rev. Liz Theoharis, director of Union Theological Seminary’s Kairos Center, were among those who submitted to arrest Aug. 2 after the Poor People’s Campaign march reached Capitol Hill. Others arrested included civil rights icon the Rev. Jesse Jackson and a mix of workers, clergy and like-minded supporters, some making their way forward in wheelchairs and with walkers.

Rather than securing the demonstrators with handcuffs or plastic zip-tie restraints, officers put color-coded wristbands on those they were detaining. Each wristband displayed the name of an arresting officer and helped separate the arrestees into groups for smoother processing. Video of the demonstration and interviews with participants indicated the crowd was peaceful while chanting and singing, and the officers were orderly and respectful.

There are a LOT of people in line to be arrested. As the are taken away, people shout after them: “Thank you! We love you!” pic.twitter.com/zVPo75ulum

The Rev. Gini Gerbasi, rector of St. John’s Episcopal Church in the Georgetown neighborhood of Washington, approached the officers in her green stole and clergy collar. She was part of the final group that submitted to arrest. Last year, she attended Black Lives Matter demonstrations in the city, and was present on June 1, 2020, when protesters were forcibly removed from Lafayette Square by police using smoke canisters, pepper balls and other crowd control devices.

That scene was nothing like what demonstrators faced on Aug. 2, she told ENS in a phone interview. “It was really wonderful to be able to hear the police captain say, ‘This is your warning,’ and then to have this all be so orderly – what it’s supposed to be like, what a reaction to the exercise of First Amendment rights is supposed to be like.”

She and other Episcopalians were told to provide IDs so officers could record their info and issue them citations, after which they were released. The fines were said to be about $50.

“I feel like, as people of faith, we have to stand up and actually take some action,” said Jennifer Page, a 64-year-old vestry member from Gerbasi’s church. Page told ENS she hopes her arrest and the direct action of the demonstrators will help motivate others to support the platform of the Poor People’s Campaign.

As she, Gerbasi and the other Episcopalians in their group sat on a sidewalk awaiting their citations, they wore pink wristbands with “Byrd” scrawled on them, identifying their arresting officer. “The atmosphere has been one of solidarity. You can feel the presence of the Holy Spirit,” said Page, who lives in Arlington, Virginia.

Among the group was the Rev. Theresa Lewallen, a deacon from St. Alban’s Episcopal Church in Annandale, Virginia. Lewallen described to ENS how the Poor People’s Campaign had kicked off the day’s direct action with an orientation for those who would be risking arrest. She praised the organizers for executing a well-coordinated event. After talking with some workers in the march about their economic struggles, she plans to convey the campaign’s message back to her congregation.

“As a deacon, part of my work is to bring the hopes and needs of the world to the church, and what better way to do it than among the people who are expressing their hopes,” she said. The demonstration “builds the movement and it also gets the issues known.”

Foster, the Alabama deacon, said she was heartened to see other Episcopalians join in the rally and march. “It’s very heartwarming,” she said. “From the pulpit to the public square, that is so, so important.”