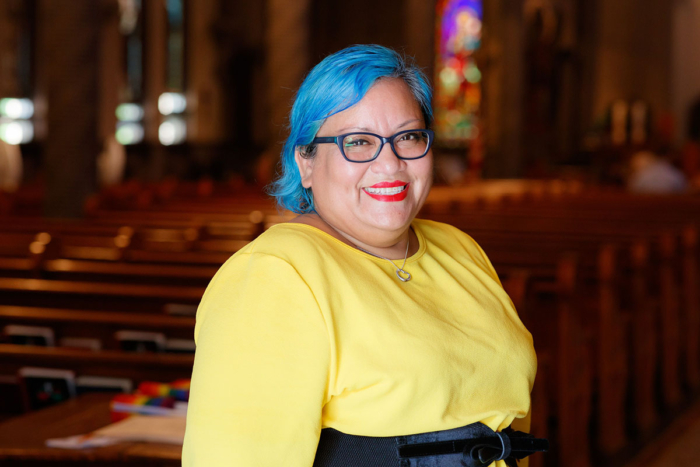 [Episcopal News Service] Earlier this year, Sandra Montes began a new role, dean of chapel at Union Theological Seminary. She first served there as an artist-in-residence for a week in 2019 and began in an interim director of worship that August through the pandemic, leading virtual services.  And last year, Church Publishing released her first book, Becoming REAL and Thriving in Ministry. Written in Spanish and English, the book posits that people can foster inclusivity and individual ministry through Relationships, Excellence, Authenticity and Love. “It’s perfect to read during this time, because the pandemic has made us stop, and so I’m hopeful that we’ll continue to just stop and think,” Montes recently told Episcopal News Service. The framework outlined in her book, she added, is a critical step on the path toward racial reconciliation. 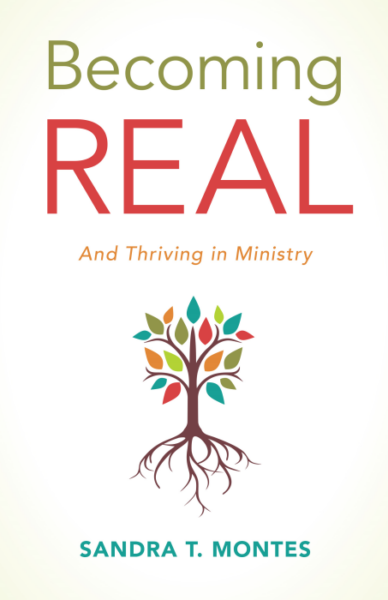 Montes will tell you that although her father and brother are ordained priests, she isn’t one. Born in Peru, Montes, her brother and parents first arrived in the United States in 1979. Sandra was 9 years old. At birth, a respiratory condition left her gasping for breath and wasn’t supposed to survive, but did: “They prayed over me, and I was miraculously healed,” Montes said. She spent her early childhood in Guatemala while her father attended seminary, the family moved to Texas for a job as an evangelical pastor, eventually turning to The Episcopal Church after settling in Houston.

Montes is a vocal presence in The Episcopal Church, advocating for bilingual resources and immigrants. Now 50, Montes has centered much of her volunteer ministry in music, initially at La Iglesia Episcopal San Mateo in Houston (where her father was rector), singing at General Convention, and advocating for more diversity in church music. She works as a Spanish-language resource consultant for the Episcopal Church Foundation. She is known to publicly critique the church’s lack of diversity on social media. She has also helped create unconventional pathways to ordination for other lay ministers. “Everything I do I want to be accessible to more people, especially people who may not speak English, and to people who look like me,” she said.

The rest of ENS’ interview with Montes has been condensed and edited into the Q&A below.

ENS: I read that your father felt that God called your whole family to ministry. Do you agree?

Montes: I really, really do. When we were young, my dad always would tell us that we were all called as a family into ministry, and I’ve seen that. My brother, me, and even our kids. I do believe that I have a call for ordained ministry, but it hasn’t happened, and I’m okay with that.

ENS: Why does it feel okay at this point in your life?

Montes: I love where my life has led. I love the singing that I have been able to do around the church and other places. When I minister, with my music, with my work—I am pastoring people, or shepherding people. I told this to the commission on ministry, back when I was in my twenties: “I will be a minister with or without the collar.” And I do feel that. That’s why I feel it’s okay.

ENS: A key focus of your work is empowering both laypersons and ordained ministers in their ministry. When did that begin?

Montes: I’ve been trying to do this for people since I was very young. I don’t know that I would have called it “empowering” when I was a teenager or younger, but it was so important to me to help people feel included. When you feel like you belong, then you feel more empowered to speak up or to show up. So I feel like it’s a calling in my life. The word may be empower, but it’s just me encouraging people to continue with whatever it is that they’ve been doing, or whatever it is they want to do.

ENS: I read that you created a pathway to ordination for a layperson in Philadelphia. Tell me more about that.

Montes: I’m an educator, so of course I love anything that has to do with education. I contacted several seminarians to see what they were studying, what the coursework was like, what the syllabi looked like in different Episcopal seminaries, and I went from there to see what would be best for her.

ENS: In 2018 you said you were on a mission to find out how welcoming Episcopal churches are by noticing their reaction to you. Why did you start doing that, and what have you learned?

Montes: I decided to go around the Houston area, my diocese, and see: “Are we really as welcoming as we say we are?” I travel a lot, so I have visited many, many churches, but here in Texas [in Sugarland; Montes also has an apartment near Union in New York City] I hadn’t. I think there was one church that was kind of welcoming, but most churches weren’t. I’m short, but I’m fat, so it’s not like you can miss me. I’m always wearing bright clothes—and hair. And I don’t look like most people in Episcopal churches because I’m brown, I’m dark brown. I always wondered, “Why aren’t these pastors coming up to me and just welcoming me?” I would return to those churches, because I’m a Christian and I’m an Episcopalian. But I kept thinking, “What if I was someone who was literally searching for God, and people are looking at me like, ‘Why are you here?’ Or not even looking at me?’”

ENS: If I ask you how to change that, does it segue into your book?

Montes: It does. One of the things that I put in the book is, “Are we doing the same things we’ve always done?” I remember people inviting me to coffee hour. But they don’t stay with you. So you’re brand new, you don’t know anyone, and they just leave you alone. This is not welcoming to me. I’m an introvert even though it might not seem like it, and I’m shy. I’m not going to go up to people that I don’t know if I’m new somewhere. So little things like that. I’ve added those things in my book.

ENS: How do you describe your book to people who haven’t read it?

From there we have to be excellent in what we do—not perfect, but excellent. In the book, I include a lot of questions for you to ask yourself or as a group. And then of course to be authentic. And everything needs to be in love, if we call ourselves Christians and followers of Jesus. Love is hard for some people to talk about, but it’s also very important. We don’t have to talk about Jesus to talk about love. I need you, you need me, we need each other. If we’re going to get to racial reconciliation, we’ve got to go through this first.

You’re known for calling out the church on areas for improvement. And in 2018 you told Episcopal News Service that you love the church. What makes you call out the church? Do you see a relationship between love and difficult honesty?

Montes: I love the church a lot. One of the reasons is that it welcomed us and accepted my family in a local way. But we have so much growth to do. Our church is super, super white, and it seems like we want to continue to remain white instead of being wide—wider. It’s just so incredible to me how the church just does not want to change.

At the same time, I love her fiercely. Often, when I’m about to throw in the towel, something happens: A person reaches out to me, or I hear a sermon—something happens. I feel like God is telling me, “This is your calling, just wait.” My spiritual advisor said that was part of my ministry. Part of my calling is just calling out the church and saying, “How long will this continue?” She was telling me it’s going to be very difficult, but it is something that I’m called to do.

ENS: How does this practice of speaking up intersect with your book and the REAL framework?

ENS: Montes: My book is the suggestion of what to do with all these questions that I have. And it comes from seeing people in ministry model these things. If all of us did them, we’d have a better church.