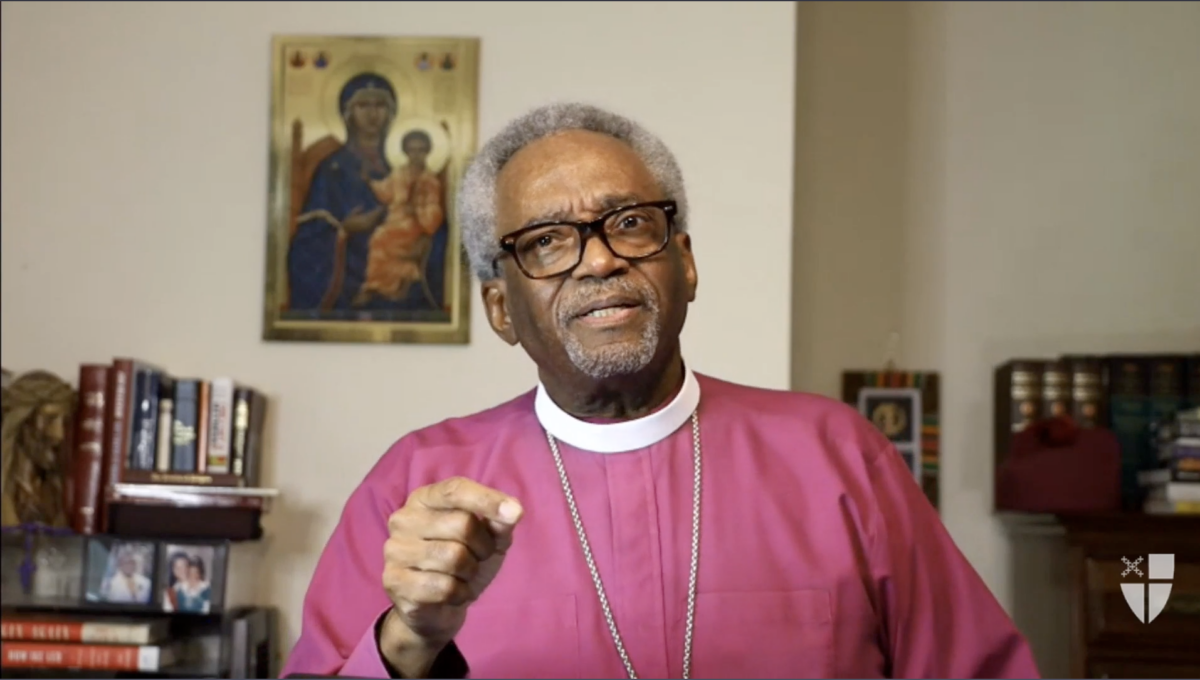 Presiding Bishop Michael Curry preaches during the opening worship service of the 2021 Union of Black Episcopalians conference and revival on July 27, 2021.

[Episcopal News Service] The Episcopal Church is at a crossroads, church leaders said this week during the annual Union of Black Episcopalians conference and revival; if it is to flourish and maintain integrity, it must embrace a revolution in values both within and beyond its walls.

“Reform has its time and place, but reform is not enough,” Presiding Bishop Michael Curry said in his sermon during the opening worship service. “Mere tinkering at the edges – that’s not enough. We need a revolution.”

The virtual event, which runs July 27-30, includes worship services, memorials to the victims of COVID-19, panel discussions and musical performances. It also includes a celebration of the 40th anniversary of the original “Lift Every Voice and Sing” hymnal that collected African American spirituals including the title song, which The Episcopal Church Executive Council has endorsed designating as a national hymn, supporting a proposed bill in the U.S. House of Representatives.

“Lift Every Voice and Sing” is also the theme of the event, with a verse from the song setting the tone for each of the three full days, which focus on the past, present and future of Black Episcopalians.

In his sermon on July 27, Curry touched on all three, preaching on Jesus’ “revolutionary” statements on the necessity of being born again in John 3. American society needs such a rebirth, he said, pointing to recent events – and it is the church’s mission to lead the way.

“Need I mention George Floyd and Breonna Taylor and so many others? We need a revolution,” Curry proclaimed. “Need I mention Charlottesville, of just a few years ago, with Nazis marching through the streets of Charlottesville shrieking, ‘Jews will not replace us’? … Shall I mention Jan. 6, when the Capitol of the United States was breached in an attempted insurrection to overthrow an election? … Shall I mention the ways in which Christianity itself has been compromised by anybody’s supremacy over anybody else?

“Oh, we need a revolution.”

Curry recalled meeting writer Ibram X. Kendi and discussing his description of racism as a cancer that can destroy a society unless it is diagnosed and treated.

“I said to him, ‘I speak to you as a cancer survivor myself, both of colon cancer and prostate cancer, and I know exactly what you’re talking about,’” Curry recalled. “But with early diagnosis, early treatment and proper medical care and good prayer, you can make it. I’m a witness.”

Racism – and the selfishness in which it is rooted – “is the most destructive power in the world,” he said. “It will tear a nation apart. It will render governments ineffective. It will make democracy itself impossible. It could undo human life, even, on the planet. We don’t need just reform. We need a revolution.”

Curry’s call for radical change was echoed on July 28 when he participated in a plenary panel discussion on the history of Black Episcopalians – and how history is reflected in their present experience – with Byron Rushing, vice president of the House of Deputies and a former Massachusetts state representative, and Ora Houston, a former Austin, Texas, City Council member.

Rushing stressed the importance of understanding and honoring Black Episcopalians’ origins, as personified by the Rev. Absalom Jones, the first Black Episcopal priest.

Rushing pointed out that African Americans lived under slavery much longer than they have as free people, and decisions being made today must be informed by that context.

“We will not be free in the United States until 2111 as long as we had been enslaved before 1865,” Rushing said.

Rushing and Houston added that the effects of post-emancipation forms of oppression, such as Jim Crow laws, redlining and other racist urban planning strategies aimed at segregation, are still embedded in neighborhoods and school districts. Houston attended segregated public schools in Austin and lives on the city’s east side because that was where the city moved Black citizens as part of a master plan to segregate them from the rest of the city.

Episcopalians, Houston said, need to “understand how those interactions happen and why some Black people live in one part of town, and you live in another part of town – that disconnect you don’t pay attention to.

“There was a system that made some of that happen,” she told the panel. “And Episcopalians who are somewhat entitled and privileged – I admit that I am – we have to do a different way of reaching out and reaching over to the brothers and sisters that are left behind.”

Houston also expressed frustration that the church’s work of racial justice and reconciliation often falls to Black people. White Episcopalians must take up that burden, she said.

“We are the minority in this church, yet we’re doing the majority of the work. So when do we shift some of that work over to the dominant culture?” she asked. “Perhaps we need to encourage the dominant people in The Episcopal Church to have a revival.”

“White people need to be converted,” Rushing said. “For a variety of reasons we have found ourselves in The Episcopal Church surrounded by them – the majority of the members of The Episcopal Church are them. And we have a responsibility as Christians to convert them. Because if we are not about that, why bother with them?”

If the culture in the church surrounding race is not going to change, Rushing said, Black Episcopalians must make it clear that they will not be taken for granted. He reminded participants that while Absalom Jones led his fellow African Americans out of a segregated Episcopal parish and created a new one, his contemporary Richard Allen chose a different route, creating a new denomination now known as the African Methodist Episcopal Church.

The UBE conference and revival continues through July 30 with more discussions, worship services and a gospel/spiritual singalong in celebration of the 40th anniversary of the “Lift Every Voice and Sing” hymnal. Worship services are being livestreamed on the UBE Facebook page while other events are held on Zoom and limited to registrants.