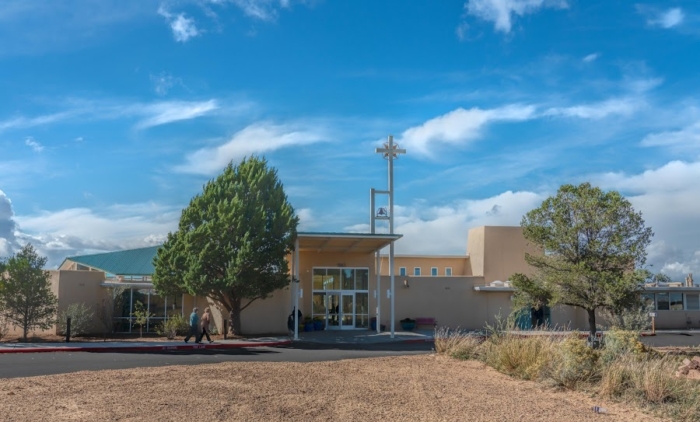 [Episcopal News Service] St. Bede’s Episcopal Church, a congregation in Santa Fe, New Mexico, with about 250 members, sets aside 10% of its plate and pledge collections each week for outreach efforts. This year, St. Bede’s used that money to join a growing number of Episcopal congregations that are each helping hundreds of people they’ve never met by paying their overdue medical bills through an organization called RIP Medical Debt.

The charity, founded in 2014, negotiates the purchase of medical debt from collection agencies and hospitals for pennies on the dollar, and instead of making the patients pay, RIP Medical Debt sends them letters saying their bills have been forgiven with no strings attached. The nonprofit estimates it has eliminated $4.5 billion in debt this way, benefiting more than 2.6 million people in the U.S.

Compared to those numbers, the $15,000 donated by St. Bede’s may seem like a drop in the bucket, but the church’s gift this month was enough to wipe out nearly $1.4 million in debt owed by 782 households in New Mexico and parts of Arizona – an accomplishment that generated news headlines across New Mexico and beyond.

The Rev. Catherine Volland, St. Bede’s rector, told Episcopal News Service she plans to reference the congregation’s donation during her next Sunday sermon, on the Gospel story of the loaves and fishes: “How a little money goes a long way when God’s hand is in it,” she said.

At least 29 Episcopal churches have contributed to RIP Medical Debt since January 2019, according to info provided to ENS by the nonprofit. Emmanuel Memorial Episcopal Church in Champaign, Illinois, was one of the earliest of those church donors, when the congregation eliminated $4 million in debt with a $15,000 gift. An April 2019 ENS story about Emmanuel has been cited by some of the other congregations as their inspiration to participate.

“Ever since the ENS story, I hear probably about every three months from an Episcopal church somewhere in the U.S. that is considering working with RIP Medical Debt,” the Rev. Beth Maynard, Emmanuel’s rector, told ENS by email. She sees the charity’s work as a natural fit for churches looking for ways to serve their neighbors.

“Something I tell people every time is that a church putting forgiveness into action in this way makes intuitive sense to people, whether or not they come from a faith tradition,” Maynard said. “It’s a great way to testify to how much grace means to us and to put into action the Gospel we proclaim.”

RIP Medical Debt was founded by former debt collection executives who wanted to use their insider expertise to turn the industry’s model on its head. Health care providers sometimes resort to selling unpaid bills to the secondary debt market to recoup part of the bills’ value while writing off the loss. Collection agencies treat the debt as an investment product, bought at a discount in the hopes of turning a profit by collecting on the debt.

Instead of profiting from patients’ payments, RIP Medical Debt eliminates them. By buying up discounted debt portfolios from collection agencies and directly from hospitals, it can leverage even small donations to wipe out the overdue accounts of thousands of patients at once.

RIP Medical Debt often can target its debt relief in regions requested by churches, though it is somewhat limited by the availability of debt portfolios. It estimates that $1, on average, can purchase about $100 in debt. Various factors, such as the age of the debt, can drive that cost higher or lower. The organization also limits its relief to people living at or below 200% of the federal poverty line, or $53,000 for a family of four, and it ensures that credit reporting agencies update the patients’ records to show the repayments.

“Medical debt is an enormous challenge for many, many people in the United States, and even being wealthy doesn’t necessarily insulate you from this problem,” Scott Patton, RIP Medical Debt’s director of development, said in an interview with ENS.

The scale of the problem was underscored this week by new research published in the Journal of the American Medical Association that showed collection agencies held $140 billion in unpaid medical bills last year, far higher than previously known. Researchers also found that 18% of all people living in the United States have some medical debt that has gone to collection. Although the debt forgiven by RIP Medical Debt is a small fraction of that national total, the organization’s financial capacity has grown exponentially in recent years, partly thanks to word of mouth and the support of Episcopal churches like Emmanuel and St. Bede’s, Patton said.

Medical debt is a rare problem in most other developed nations, he said, and he acknowledged that debt forgiveness doesn’t address the American health care system’s underlying problems, which leave many people with medical bills they can’t pay. RIP Medical Debt is helping to raise awareness of those problems while paying down debt, he said, though that approach also is different from organizations that respond directly to requests for assistance from struggling consumers.

“We’re supply side, so we look at the debt that’s available to purchase and then we buy it. And we buy as much as we can,” he said. The donations that fund those purchases mean a lot to each individual whose debt is eliminated, he said. He credited churches across all denominations for participating and spreading the word. “Churches are inherently interested in providing service in their communities, even outside their congregation.”

The widespread examples of participating Episcopal churches include Zion Episcopal Church in the Douglaston neighborhood of Queens, New York. It launched a campaign during Lent this year to raise $10,000 for RIP Medical Debt. Churches in the Diocese of Arkansas launched their own Lenten campaign, led by All Saints’/Todos los Santos Episcopal Church in Bentonville.

“It’s really just loving your neighbor unconditionally and without expecting anything in return,” said the Rev. Sara Milford, the vicar in Bentonville. By Easter, the campaign had raised more than $20,000, helping to eliminate about $2 million in medical debt across Arkansas.

St. Thomas Episcopal Church in Mamaroneck, New York, announced in January 2020 that its donation had retired nearly $10 million in debt for more than 10,000 people. And in Walla Walla, Washington, St. Paul’s Episcopal Church attracted the attention of local news outlets in July 2020 for donating $21,000 to RIP Medical Debt to pay off the bills of about 1,300 people.

The Rev. David Sibley, rector of St. Paul’s, told ENS that donations from his congregation of about 125 families ranged from a couple dollars to one gift of $5,000.

“The parish’s response was just completely overwhelming,” he said. “We are in a position where we feel the church is in a decent spot, and so the right thing to do is to give generously and abundantly.”

Volland, the Santa Fe rector, said RIP Medical Debt deserves most of the credit. “They do the heavy lifting here. All we do is write a check.”

Forgiveness is scriptural, she said, and though her church still can do more to advocate for systemic solutions to the high cost of medical care, St. Bede’s donation to RIP Medical Debt offers a little relief to those who have been struggling with financial burdens.

“Medical debt, unlike other debt, is almost always involuntary. You don’t expect to get sick or injured,” she said, and it can happen to anyone.